Why Global Citizens Should Care
There are just 11 years left to stop the planet’s temperature rising to irreversibly damaging levels. The UN's Global Goals include calls to action to help protect the environment, including Goal 7 for affordable and clean energy, and Goal 13 for action on climate change. Join the movement by taking action here to help achieve the Global Goals.

What do Jude Law, Michael Sheen, and Juliet Stevenson all have in common?

Well, they’re all famous, for sure. They’ve all either been nominated for or won a BAFTA or Laurence Olivier Award for their work in TV and theatre. But they’re also all parents.

It’s because of that last fact that the trio have joined a total of 124 public figures from the spheres of politics, sports, academia, activism, and more — including the likes of Margaret Atwood, Peter Crouch, and David Nicholls — to urge wealthy countries to declare a climate emergency and cut down on carbon emissions to prevent global warming before it’s too late.

From 16-year-old Nobel Peace Prize nominee Greta Thunberg’s movement of school strikes around the world to Extinction Rebellion’s direct action — climate action in 2019 has been led by the inspirational activism of young people.

And now an array of celebrity parents have stood up to be counted — backing the incredible work of children around the world, while acknowledging that their generation needs to get involved too.

“Like parents everywhere, we will do everything in our power to ensure our children grow up safe and happy,” the letter reads. “We are terrified at what the growing climate crisis means for our children and millions of children across the globe — many of whom are already suffering because of the extreme droughts, floods, and storms that are increasingly the norm in our rapidly overheating world.

“We are inspired by the young people who are striking for climate action, but we can’t leave it to our children to fix the mess that past generations have created,” it adds.

Read More: Britain Just Went a Full Week Without Coal Power for the First Time in Over 100 Years

The letter was coordinated by Mothers Rise Up, a group of mums concerned by the potential consequences of climate change. It’s ahead of a march they’ve organised in Hyde Park, London, on May 12 — International Mother’s Day — alongside protests across Europe to come together as a “maternal force to be reckoned with.”

“We can’t leave it to our children,” said founder Maya Mailer. “As parents we must use out voice, our votes, and our collective power to demand climate action.”

You can check out the letter in full along with everybody who’s signed it here. But here’s a brief summary of our favourite celeb mums and dads who have joined the movement.

We are sick of feeling powerless about climate change and are demanding action from our politicians #mothersriseup and march on international mothers day.
May 12th
12 noon
Hyde Park Corner
Join us! pic.twitter.com/sIWKv7ZXCX

Sorry, but Jude Law is officially off the market.

The actor reportedly married Dr. Phillipa Coan in a secret London ceremony on April 30. It’s a match made in heaven: Coan is a business psychologist and environmental behaviour specialist who uses her PhD to tackle climate change, while Law has previously worked with Greenpeace to protect the arctic from oil drilling.

Law is a regular signatory to all sort of letters and marches aimed at fighting climate change. He’s a dad first, Hollywood hunk second (and third, and fourth) — and now he’s thrown his weight behind his children’s future too. 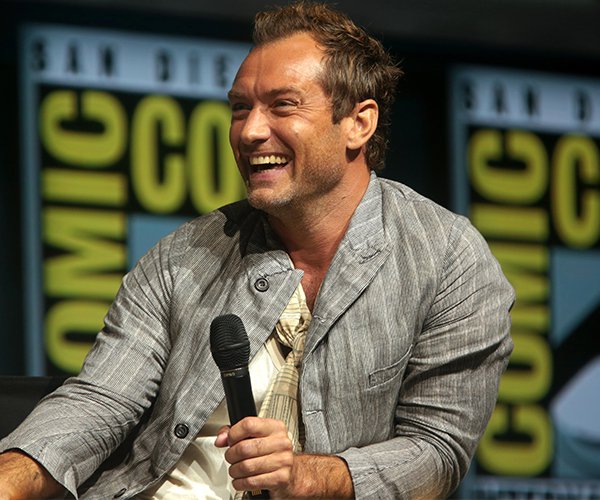 The Olivier Award-winning and BAFTA-nominated film, television, and theatre legend is known just as widely for her decades of activism as her star-studded career as an actress.

She’s worked with UNHCR to raise awareness of the refugee crisis; she’s attempted to “keep women out of boxes” in her work; and she joined the Extinction Rebellion protests in April as the direct action movement brought London to a standstill — eventually pressuring the UK to become the first country in the world to declare a climate emergency.

“Young climate strikers and environmental activists have put the climate crisis on the political agenda,” Stevenson said. “But it’s going to take all of us to keep it there.”

⁦@ExtinctionR⁩ Great to visit the XR site at Marble Arch today - a massive thank u to them for all they are doing on our behalf. Last day of action is tomorrow Thursday - do get down there if u have a mo. And follow them for future plans & actions that we can support & join pic.twitter.com/bOhNdEphrT

The football pundit has had a busy week watching his old clubs compete in several sporting classics.

Monday: Vincent Kompany scores a potentially title-deciding screamer for Manchester City against Leicester. Tuesday: Liverpool overturn a three-goal deficit to knock Barcelona out of the Champions League as, on Wednesday, a historic Lucas Moura hat trick — including a 95th minute winner — saw Tottenham Hotspur join them against all odds in the final.

Lineker called it “two of the greatest comebacks in the history of the beautiful game.”

The future looks bright for English sport. But it doesn’t mean much if, like the Environment Agency warned on Wednesday, entire towns and villages will need to be moved to different parts of the UK because climate change has increased the chances of devastating flooding.

That’s why the Match of the Day star and former player still found time to co-sign this letter — because it truly is an emergency.

“The climate crisis is an issue for all parents — no matter what we do, or where we live,” Lineker said. “Together we need [to] show politicians that this is something we care about, and an issue we will judge them on.”

The human race should be as one about tackling global warming. Disastrously there are still many, including some in the most powerful and influential positions, that continue to deny the undeniable. https://t.co/PYyNhu8Yh9

The pop star has never shied away from politics. So much so, that the singer once brought Guardian columnist and Labour campaigner Owen Jones on tour with her as her main support act.

But not only did she sign this letter, she also attended the Extinction Rebellion protests in London, performing to crowds in London on a solar-powered stage on April 17.

“I’m probably a bit old to have heard of Paloma Faith but if this will bring attention to the issue of climate change then I’m all for it,” said Sheila Collins, a retired teacher from Cardiff who tied herself to a lorry at the protest.

Don’t know whether we can put our furs away yet or not, the weather keeps changing! #climatechange#fauxfurpic.twitter.com/RlRalzgX9n

From passionately defending the proud history of the National Health Service (NHS) at every opportunity to urging dads to talk more to their daughters about periods, Welsh actor Michael Sheen instinctively reacts to the world’s biggest challenges with enthused moral fibre.

But the fight between Sheen and climate change goes even further back than the viral movements that have sprung up this year.

“Climate change — it sounds like something far away, that doesn’t really mean anything for the here and now,” he wrote in the Express back in 2013. “But it’s not. Climate change is very real and is affecting children’s lives, right now.

“As a dad to a 14-year-old daughter, I worry about what climate change means for her future and her children’s future,” he continued. “Extreme flooding, colder, longer winters and harsher summers; it’s causing chaos in the developed world and it’s threatening children’s very survival in poorer countries.”

If activism is meant to make you feel 7-foot tall, then footballer and podcast personality Peter Crouch doesn't need too much of a leg-up.

The former Liverpool and Tottenham striker signed the letter along with his wife, model and Strictly Come Dancing winner Abbey Clancy.

He's supported efforts to tackle climate change for a long time — including starring in a controversial short film written by Richard Curtis for the 10:10 campaign to reduce carbon dioxide emissions in 2010. However, the project was pulled within hours of release after audiences reacted poorly to the satirical depiction of exploding children.

Are you ready for the 'Peter Crouch #ChampionsLeague final?' 😉

"I think we can all agree the 2018-19 season of Netflix drama The Champions League is one of the best ever."

Although his name wasn’t on the letter, the 93-year-old activist and television icon recently blasted his generation for doing “terrible things” to the environment — while praising the students skipping school demanding more radical action, arguing that they’re justified in their outrage.

“Young people may lack experience but they also have clear sight,” the famed naturalist told Christiana Figueres, who spearheaded the Paris climate agreement as the head of the UN environment programme in 2015 and also co-signed the Mothers Rise Up letter, in a podcast recording on April 26.

“They can see perhaps more clearly than the rest of us who have been around for some time,” Attenborough said. “We older ones should take notice of what they say.”

“We have no option, if we want to survive,” he added. "We have a [moral] obligation on our shoulders and it would be to our deep eternal shame if we fail to acknowledge that.”

Happy birthday Sir David Attenborough! Thanks for, well, everything 💚 pic.twitter.com/FczFBPd01M