Amal Clooney on Nadia Murad, Yazidi Case: ‘I Can’t Walk Away From This’

Clooney and Nadia Murad appeared at the UN Friday and called for the prosecution of ISIS. 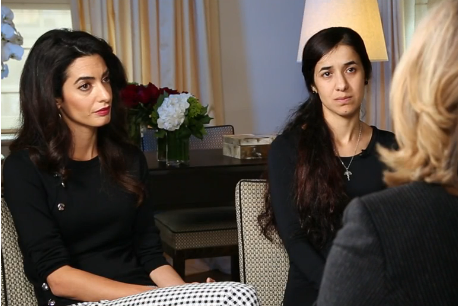 Amal Clooney said in a new interview that when she met Nadia Murad and heard the young Yazidi woman’s story of being kidnapped and enslaved by ISIS, she had no choice but to agree to represent her case on the international stage.

“She made me make the decision because I met her and I thought, I can’t walk away from this,” Clooney told NBC News’ Cynthia McFadden in an interview that aired today. “We sat on the floor for a couple of hours and just spoke about it.”

Murad was taken as a sex slave but escaped after three months. She now campaigns for greater international action against ISIS, the rescue of the her fellow Yazidis who remain captive, and a criminal trial in international court against her perpetrators.

On Friday, Murad was appointed a United Nations Goodwill Ambassador by Secretary General Ban Ki-moon and the Office of Drugs and Crime, and Clooney was by her side.

Both women called for justice for the Yazidi people, with Clooney saying she felt “ashamed” that the UN had not done more to bring ISIS to justice. She then called on the UN to try ISIS for its crimes.

I so admire #AmalClooney & her work to end/seek justice for these human rights atrocities. World, please take note. https://t.co/MwEX3xFC9W

Clooney told NBC that the speech was “born out of a sense of outrage" from what she has heard refugee women tell her about their time with ISIS.

"It's been harrowing to hear the testimony of girls as young as 11 and 12 talk about what's happened to them. And still we haven't been able to do anything about it," Clooney said.

Sitting beside Murad for the NBC interview, Clooney said taking the case to court would be one way to reveal ISIS’s violent ideology and therefore combat their message on a global scale, rather than merely trying to wipe them out with military action.

“It’s not enough. You can’t kill an idea that way,” Clooney said on the show. “One of the ways to take action against that is to expose their brutality and their corruption, and partly you can do that through trials.”

''We know that what we have before us is genocide, and we know that it is still ongoing.”

''We know that what we have before us is genocide, and we know that it is still ongoing.” https://t.co/K8pg2IQUnj

"I believe in international justice. I believe it's important that you don't just turn the page without people being held to account,” she told McFadden.

The high-profile human rights attorney said that the decision was not hers alone. She also consulted with her husband, actor George Clooney, before deciding to take Murad’s case.

"He met Nadia, too, and I think he was moved for the same reason," she said. "He understood I have spent my career working on international justice and this is a clear case of genocide and genocide that's gone completely unaddressed and ignored."

Clooney demurred when she was called courageous by McFadden, saying she could not sit next to Murad and feel courageous.

"Yes, I put my own life at risk, but I didn't have a life without giving hope to other victims," Murad said.

The pair share more in common than the quest for justice for Yazidi people.