'Community Fridge' in South London Offers Free Food For Everyone

“The People’s Fridge” in Brixton turns food waste into meals for the hungry. 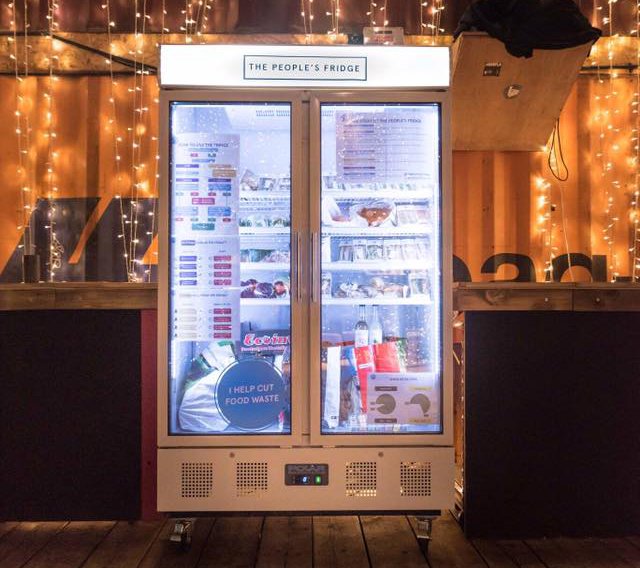 A “community fridge” has launched in London to encourage locals to donate surplus food to feed the hungry.

“The People’s Fridge” stands proudly in Pop Brixton, an outdoor creative space in Brixton, South London. It’s the product of a crowdfunding campaign from local residents to fight food poverty and food waste, inspired by similar projects in Spain, Germany, and even Somerset. The campaign raised more than £2,000 to launch, double its original target.

Anybody can donate to the fridge, and anybody can take from it, at no cost. Local businesses and residents are encouraged to use it as the prefered destination for leftover food that otherwise would have been thrown away.

Read More: How One Man Started a Food Waste Revolution in the United Kingdom

According to The Independent, only registered food traders can donate prepared food, whilst raw meat is off the table. If it’s still fully packaged, then it’s good to go. The fridge is checked twice a day, and all inedible food is disposed safely.

Olivia Haughton, co-founder of the People’s Fridge, emphasised that strict rules were applied to ensure that the quality remained high.

“We operate as if we are a food business so that any concerns of ill health would be dealt with in the same way a market trader or restaurant would deal with them, i.e. immediately and thoroughly,” she said in an interview with The Independent. "If there is any uncertainty about the safety of an item in the fridge it will be removed during our regular checks."

The first community fridge in London, @PeoplesFridge, where people can give and take spare food is in @PopBrixton! #foodsurplus#foodwastepic.twitter.com/7EwDi6XEcj

In the whole of the UK, there are 8.4 million people who live with insufficient food, the equivalent to the entire population of London. Yet at the same time, 15 million tonnes of food is wasted every single year. In the capital itself, 400,000 Londoners are trapped in food poverty. But for every five shopping bags of food bought, at least one is needlessly thrown away.

Food waste is a big issue, and it’s beginning to be addressed on the world stage. After 31,000 Global Citizens took action online, the EU Parliamentary Committee recently voted to pass a bill that establishes a target to halve food waste before 2030. One third of the 4 billion metric tonnes of food that’s produced globally every year is wasted. How we can we let this stand, when all that edible waste could easily feed the 870 million people that are left hungry?

A lone fridge won’t solve the whole problem. But what it stands for must be preserved. National action is happening, but change happens quicker when local people take on local issues. Food is wasted in every town, in every city, whilst an unacceptable number of people struggle to find enough of it to begin with. When it comes to putting food on the table, nobody should be left in the cold.