Why Movies Like 'Battle of the Sexes' Matter Today

Billie Jean King is the best.

If you’re following the Toronto International Film Festival, you’ll know that Emma Stone and Steve Carell were in town for the premiere of “Battle of the Sexes” — a film about the legendary tennis match between Billie Jean King and Bobby Riggs in 1973.

Before watching the movie, you’d assume the battle is between the loudmouth and self-proclaimed chauvinist Riggs and women's rights champion King. And on the tennis court, it is.

But what “Battle of the Sexes” actually shows is that in 1973, the real battle was a more stubborn form of sexism — one that has persisted for the 40-plus years that have passed since King took on Riggs.

And that persistent problem, brought to life so powerfully in “Battle of the Sexes”, is what makes the TIFF debut so entirely relevant today.

In the film, Riggs is not the real challenge. His blatantly sexist demeanor, while certainly aggravating, was put on to up the ante of the match.

It’s people like Jack Kramer (played by Bill Pullman) — a retired tennis pro and head of the US Lawn Tennis Association who refused King’s request for equal prize payouts — that are the true deterrents in this tale, the quieter men who don’t necessarily stand up and claim to be sexist, but whose actions speak much louder than words.

In one scene in the film, King tells Kramer she thinks he doesn’t respect women and he vaguely protests, but she rephrases her wording by explaining that it’s not that he doesn’t like women…as long as they’re in the kitchen and in the bedroom.

“It’s when we want a little bit of what you got, that’s what you can’t stand,” she says.

Read More: 10 Movies From TIFF That Prove the Future of Film Is Female


And unfortunately, that feeling is something women continue to encounter today.

A recent report from Catalyst Canada showed that women working full-time made $0.83 to every dollar earned by a man. In the United States, women are paid approximately $0.80 to every dollar a man earns, according to research by the National Partnership for Women and Families.

The frustration that King felt is masterfully extended to the audience through Stone’s performance, brought vividly to life against a 2017 backdrop of a US president who makes lewd comments about women, wage gaps between men and women around the world, and a lack of inquiries into missing and murdered Indigenous women right here in Canada. It’s not hard to understand why this sentiment rings true today.

Still, the work that remains should not diminish the work that has been done and this film does effectively celebrate King’s monumental accomplishments.

She shook the establishment by demanding equal pay and forming the Women’s Tennis Association in 1973. She even threatened to boycott the 1973 U.S. Open if they refused to offer equal prize money to men and women and her demands were met.

Around this time, Riggs — a 55-year-old former Wimbledon champ with a gambling problem — was goading top female tennis players into competing against him. He effortlessly beat champion Margaret Court in May 1973, but was swept by King in September 1973 in their infamous match dubbed the Battle of the Sexes.

Just this past March, the USA National Women's Hockey Team threatened to boycott the 2017 IIHF Women's World Championship if they did not receive better compensation.

Team captain Meghan Duggan had been earning just $22,500 a year, which made her one of the highest-paid players in the National Women's Hockey League.

Read More: Women Are Finally Back on Banknotes as Jane Austen £10 Goes Into Circulation in the UK

The US women’s soccer team filed a suit in 2016 to fight for equal pay, seeing as their team was much more successful than the men’s team.

Canada’s top female soccer players also created a union, The Canadian Women’s National Soccer Team Players’ Association, which was created in 2016 to represent the national team in negotiations over compensation and playing conditions.

Gender equality will not be achieved without the support and determination shown by people like King. 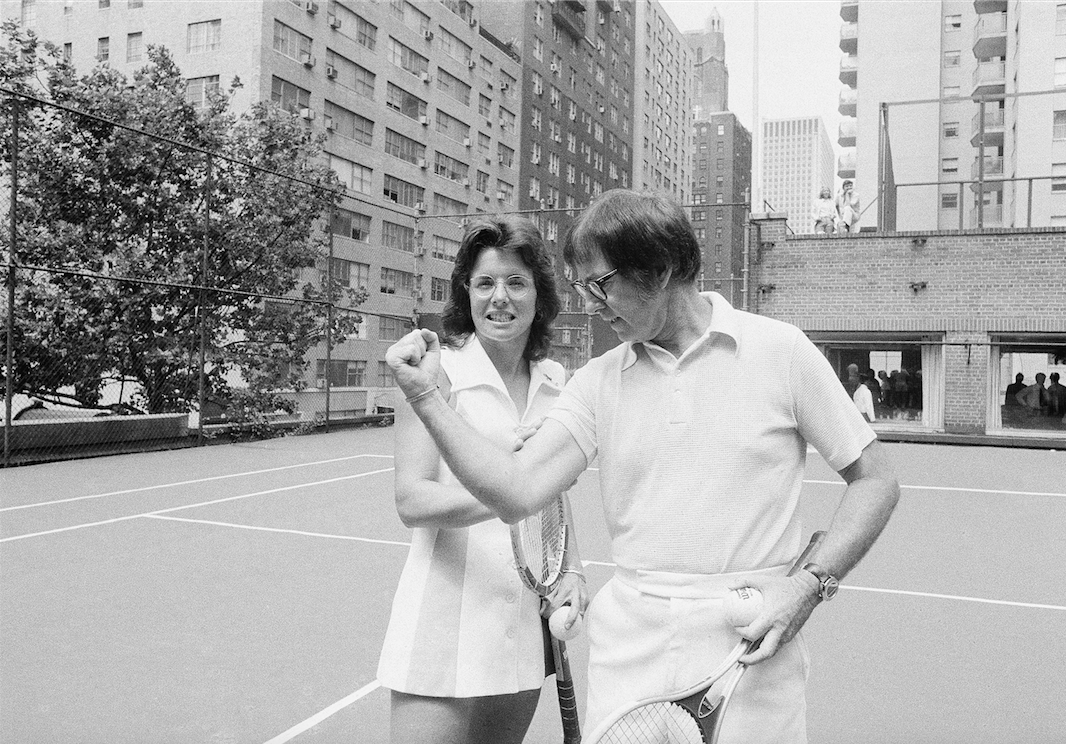 “Battle of the Sexes” feels relevant in 2017 when it comes to the fight for gender equality. It conveys a powerful message about standing up for women’s rights in the face of adversity, and not just in sports.

People continue to fight for gender equality in all sorts of ways, and Global Citizen does too. You can take action here.