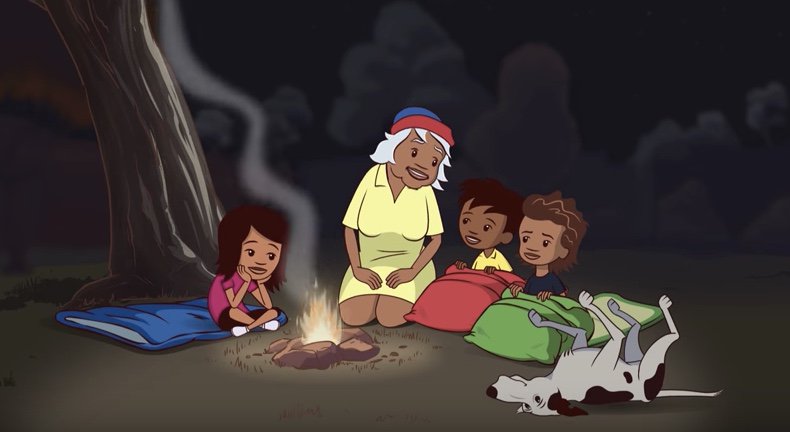 At last — indigenous Australian kids can watch an animated TV series that resonates with their own lives. It has taken a talented cast of actors and writers to create the authentic world that is Little J and Big Cuz but it is finally here, and kids and adults alike are loving it.

Little J and Big Cuz follows two Aboriginal kids aged 5 and 9 who live with their Nanna and Old Dog. Through the gap in Nana’s fence the pair embark on adventures to salt water, and desert country. They also learn all about country, community and culture from their Nana and their teacher Ms Chen at school.

The voice for the character of Big Cuz is done by award-winning Indigenous actress Deborah Mailman. In an ABC article she points out that the show appeals to a broad audience and praises the fact that at last Aboriginal kids can finally see themselves represented on screen.

It has taken the Australian TV industry 60 years to reach this point.

“Never before has an Australian animated show targeted an indigenous audience. As an indigenous person this seemed wrong,” state's director Tony Thorne “The show’s creation is another step in the empowerment of Aboriginal people to represent their contemporary lives from their perspective,” he said.

The show offers an insight into Aboriginal culture in a modern world. Since the Australian free to air NITV channel entered Australian homes there has been more culturally diverse content available but this is the first time that Aboriginal kids have had a TV show for them and about them.

Actor Mark Cole Smith said it was an honour to be part of the program.

“This series will open the minds and hearts of our Indigenous youth to a whole new world of possibilities. It's an honour to be a part of it.” he told SBS.

Lydia Miller, executive director of Aboriginal and Torres Strait Islander Arts at Australia Council spoke to the ABC about the importance of Indigenous kids having an opportunity to see themselves represented on TV. “When you see yourself reflected in the society you understand you have a place in the world," she said.

Producer Ned Lander agrees. “Great television can help kids feel good about themselves and about tackling big challenges, like going to school. During the vital years of four to six, when they are starting that journey and developing new levels of self-awareness, kids need lots of support.” he said.

During the launch for the show at Parliament House, Minister for Education Simon Birmingham said, “This is a profound way in which, in a very new way, we are going to help generations to absolutely learn more about Indigenous culture.”

Tune in to Little J and Big Cuz on NITV every afternoon at 4 p.m.