This App Aims to Reduce Suicides in Young Indigenous Australians

Can this app help reduce high rates of youth suicide? 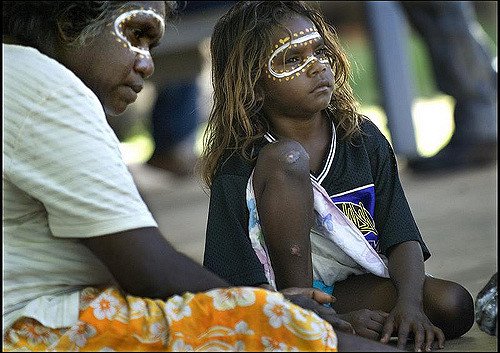 “Young Aboriginal people are four times more likely to take their own life than their non-Aboriginal peers. And the suicide rates of of Indigenous men is the highest in the world.”   - Jack Charles (Actor).

Following the suicide of a young man in 2005, the Warlpiri elders of the remote community of Lajamanu in the Northern Territory, Australia were fed up. They wanted to do more to prevent the suicide of any more of their young people.

That’s when they launched the Milpirri festival. The idea of the festival was to promote the traditional ideas of ‘Kurdiji’ among the community’s young people and build a sense of belonging.

In local language the Warlpiri word ‘Kurdiji’ means “to shield, protect or ward off”. The idea comes from an initiation ceremony of the same name. It is also about empowering and supporting resilient young people.

Read more: Powerful Video Reminds Us: This Is What Privilege Looks Like

According to the Collective Hub, the festival is a celebration of Indigenous music and dance and “also provides a chance to connect non-Indigenous Australians with the local heritage, making for stronger and wider-reaching bonds. The four pillars (language, ceremony, law and skin name) of Kurdiji are built on this idea.”

Now the community want to take this idea into the digital realm and have created an app aimed at helping young people find a sense of identity, and belonging. Elders are guiding the design of the Kurdiji 1.0 app, which is based on cultural stories, ceremonies and law. The app is targeting young people who feel isolated and will feature video, audio and text, ceremony and dance that will provide “cultural nourishment”.

The app is a big deal as the ideas of Kurdiji have previously only been available through ceremony and the elders in the community. Now the community are changing their laws to make it publicly accessible. All in the name of protecting and supporting their youth.

The community has been joined by technologists, photographers and a leading clinical psychologist from The Black Dog Institute. They also have actor Jack Charles on board to help promote the project. He sparks hope in the video explainer when he says, “But even when we feel broken, healing is possible.”

Thx to support worldwide we have raised $22,746 of our $280k goal to help realise the Kurdiji 1.0 app & prevent suicide in Indigenous Youth! pic.twitter.com/EKNnC1qUTh

This community led project is relying on crowdfunding to get the project off the ground. You can support the project here.

There hasn’t been a suicide in Lajamanu since the launch of the Milpirri festival in 2005.