After Divisive Election, US Citizens Need to 'Rehumanize Each Another'

Where does the US go from here? 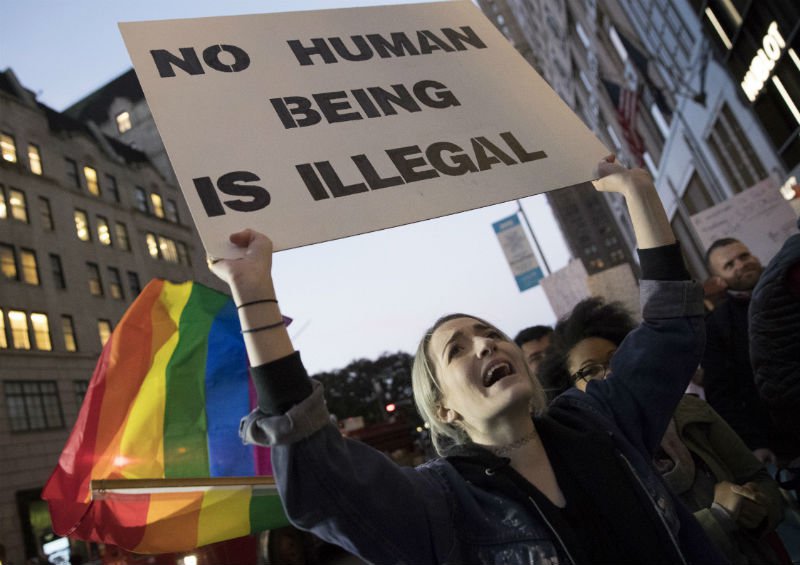 The 2016 presidential election was profoundly antagonistic. Donald Trump supporters loathe Hillary Clinton, and Clinton supporters revile Trump. This mutual antipathy has been extended to the supporters themselves, and since the bulk of political discussion seems to take place on social media — where sound bites, half-truths, and hostility reign — constructive, cross-party dialogue became nearly impossible.

In fact, the Pew Research Center found that 86% of Democrats view Republicans unfavorably, and 91% of Republicans view Democrats unfavorably, with many people in both camps holding extremely unfavorable opinions of the other. It's the most polarized the country has ever been. In this context, genuinely engaging with the issues has become challenging.

So where does the US go from here? How can the country move beyond dysfunction to build a healthy civic foundation for living and governing?

Read More: 'Not My President' Rings Across Major Cities as People Protest Trump

For Eric Liu, author, educator, and founder of Citizen University, the answer is not to paper over deep divisions with fleeting pledges of decency. Instead, people have to get beyond reflexively viewing each other as caricatures or as the enemy. People have to begin to rehumanize each other, and then the real work of democracy can begin.

“A lot of people have the instinct to build bridges,” Liu told Global Citizen. “I understand that on a value level, but I would caution against rushing to fake reconciliation.”

But for these more substantive arguments to take place, Liu said, the country needs to regain mutual trust within and between communities. Only when we trust in the integrity of someone with different views can meaningful dialogue begin.

And that trust-building begins with a basic process of rehumanization.

“The first step is to really truly listen to, see, [and] hear one another as humans,” Liu said. “To get people to come across lines of party and ideology, social class and race, and have structured settings where we can hear each other without judgement and rebuttal.”

“It’s about embracing the complexity of reality,” he said. “You have to let go of framing. The goal isn’t to come out with consensus or agreement, but understanding.”

“It’s not so much to talk about politics, but to talk about universal human questions,” he said. “If we can get people together to ask, ‘how did you get formed?’, ‘who influenced you?’, ‘who shaped you?’, ‘what experiences shaped you?’ For all their surface diversity, there are deep chords of connection that can bind people. The more we see each other literally, the harder it becomes to demonize.”

Read More: Reports of Racism Are Bubbling Up Across the US. Here's What You Can Do.

Liu’s 2004 book “Guiding Light” explores the ways in which mentors influence people and how we form our identities. For his book tour, he held group sessions with readers from various backgrounds and guided them through a series of questions that are more universal than political ideology — in particular, he asked people to describe their mentors.

It showed the participants that people are much more similar than they think and that, when given the chance to build respect and friendship, people are generally open-minded.

Liu has expanded this project of formal and informal community-building exercises across the country in the proceeding years.

One project in Chicago called “On the Table,” led by Chgo Community Trust, brings people together every year for dinner table conversations. Tens of thousands of citizens have taken part, according to Liu. This year’s discussion revolved around how to build one cohesive Chicago.

“They have developed a simple framework and template and do so in a way that is compassionate and doesn’t devolve into shouting,” he said.

Other groups that have adopted this model include Living Room Conversations in Portland, 1000 Dinners TO  in Toronto, and Dallas Dinner Table.

Liu recently began an initiative called Civic Saturdays to promote these ideals of seeing each other clearly and with empathy. The project aims to capture the reverence of a church setting to help people see that respect and common cause are serious, but also uplifting, matters. (You can read his first “sermon” here, written after Trump’s victory.)

More broadly, Citizen University teaches people how to be more engaged and effective in their role as citizens, and to learn what it means to have power.

These efforts are ultimately global in scope, because, as the world becomes more interconnected, the fates of people in different countries become increasingly intertwined.

Read More: Why Global Citizen Matters Today More Than Ever Before

The problems of climate change, migration, slowing economies, what to do with technology, and so on, are borderless and global in nature. To successfully deal with them in the future, in ways that benefit us all, we have to recognize and appreciate the humanity in everyone.

“There’s no such thing in a globalized age and environment for something to be ‘someone else’s problem.’"