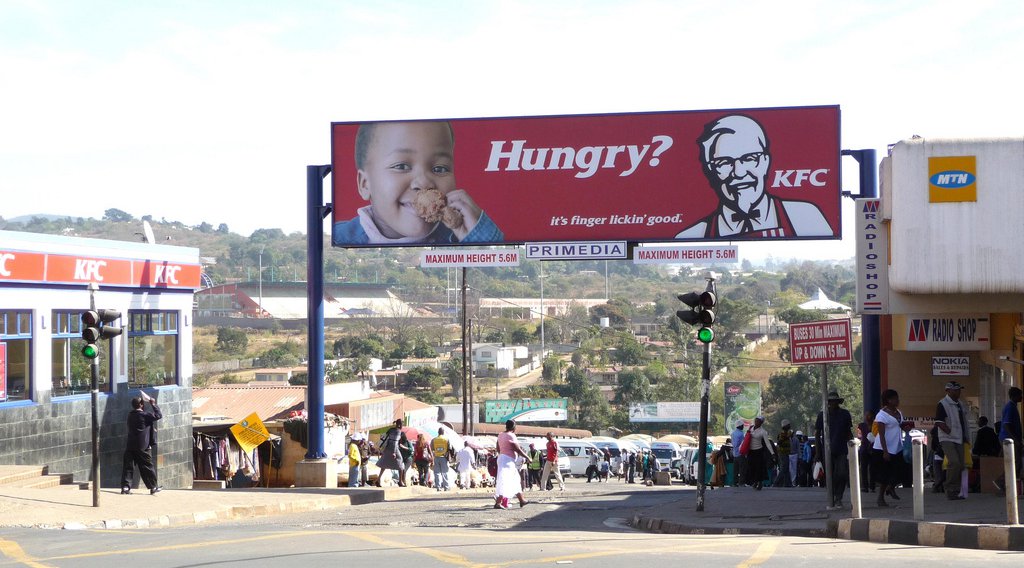 Much of the news coming out of the African continent lately has been about rising rates of hunger and famine, which is currently threatening millions in the Horn of Africa. But it’s not so often that you hear about the opposite of this.

While it’s true that hunger remains a massive concern in Africa, parts of the continent are now suffering from a much different health crisis — obesity.

According to a growing body of research, Africa’s incipient middle class is increasingly spending money on foods high in fats and sugars, especially in urban areas undergoing rapid development. The Malabo Montpellier Panel (MMP), a team of agriculture experts working in Africa, recently reported that processed foods account for 70-80% of the middle class’s food budget.

“Africa is a latecomer in the obesity epidemic, but one with fast-growing prevalences,” Joachim von Braun, an economics professor at the University of Bonn and panel co-chair, told the Guardian.

According to The New York Times, one fast food chain in particular is spreading quickly through sub-Saharan Africa: KFC.

The restaurant has 850 locations in South Africa and has recently spread to Angola, Tanzania, Nigeria, Uganda, Kenya, and Ghana. In Ghana, where KFC has become a sudden status symbol, obesity rates have grown more than 650% since 1980, according to the report.

“Eating local foods in some places is frowned upon. People see the European type as civilized," Charles Agyemang, a native of Ghana who now studies obesity at the University of Amsterdam, told the Times.

The owner of KFC, YUM! Brands, told the Times the company takes health in Africa seriously, offers healthy options and believes in a balanced lifestyle. It also sponsors a youth cricket league in South Africa.

The MPP’s report notes that this is due in large part to changing lifestyles of the middle class — of which unhealthy eating habits are but one piece of the puzzle.

“A shift in dietary patterns and physical activity levels is leading to a nutrition transition, with an increased prevalence of overweight and obesity levels,” the report reads. “Changes in eating habits, such as the consumption of cheap, nutrient-poor, highly processed foods, combined with a reduced physical workload from increasingly deskbound economic activities, have increased obesity levels at a much faster rate than undernutrition has been reduced.”

Children in Africa seem to be especially vulnerable to the consequences of these changes. Levels of childhood obesity have risen from 4% in 1990, to 7% in 2011. At the current rate of increase, that number is expected to reach 11% by 2025, according to the MPP.

Global #obesity more than doubled between 1980 and 2014 https://t.co/V2vxhIsRvGpic.twitter.com/neftjqEK8C

Global Citizen campaigns on the Global Goals for Sustainable Development, including goals two (zero hunger) and three (good health and well being), which are uniquely intertwined.

In fact, the World Health Organization (WHO) notes that there is an epidemiological relationship between undernutrition and obesity, saying, “undernutrition early in life – and even in utero – may predispose to overweight and non communicable diseases such as diabetes and heart disease later in life.”

Over 70 million African children under the age of five suffer from growth stunting and or acute malnutrition due to lack of proper food, according to UNICEF. Even if they are fortunate enough to reach the middle class, the legacy of hunger will predispose them to obesity-related chronic diseases later in life.

Read More: Obesity on the Rise as Fight Against Hunger Slows in Asia, UN Report Finds

The New York Times’ West Africa Bureau Chief Dionne Searcey recently pointed out that American fast-food companies have been one of the quickest to take advantage of Africa’s growing middle class, where their restaurants have come to represent a status symbol in many countries.

Additionally, in regions where so many are affected by hunger, being overweight is not necessarily seen as a negative.

“Attempts at curbing obesity have butted up against long held societal views: girth can be a welcome sight here,” she wrote about Ghana, a country exemplifying the move towards fast food in Africa. “To many, weight gain is an acceptable side effect of a shift from hunger to joyful consumption.”

Whether socially acceptable or not, in areas that lack the adequate medical infrastructure to effectively treat chronic conditions, the consumption of processed and fast foods poses a health risk.

“A surprising number of friends and colleagues here have high blood pressure or diabetes,” she wrote. “These health issues technically are manageable, but in places where medical care is expensive and less available than in the West, chronic diseases can quickly get out of control.”