LONDON, July 4 (Thomson Reuters Foundation) - Three years ago Maliha, 24, was sitting in a park in western Afghanistan with the man she thought was the love of her life.

The pair were planning a future together, but that future was cut short in a brutal instant.

Suddenly, police officers barged into the park in the city of Herat and arrested the couple.

Maliha was accused of maintaining an illicit relationship, which in the eyes of Islamic law is a criminal act. At the police station, her companion called his family, bribed the police and disassociated himself from her.

"He deserted me like he never knew me," said Maliha said. "They informed my family about the incident and my involvement with a man. My father disowned me immediately and threatened to kill me if I ever approached him."

Maliha was convicted of being a prostitute and spent more than three years in a women's prison, sharing a cell with women convicted on similar charges.

Read More: This Indian Woman Was Attacked with Acid for the 5th Time

Wardens at the prison came to the cell and harassed, beat and sexually assaulted the women, she said.

"We were branded as cheap and filthy women. Some nights I heard girls shouting...the prison officers were taking them out and sexually abusing them," she said. "I was so scared that I hardly ever bathed as it could attract attention towards me."

Maliha herself was abused one day when a man arrived claiming to be a lawyer. She was shown into a room with him where he tried to rape her. She was badly beaten when she resisted.

Her suffering continued until a woman lawyer and women's rights activist, Mahdis Doost, stepped into help her.

Afghanistan is one of the most dangerous countries to be a woman or girl in, and a shortage of female police officers and lawyers means women rarely report abuse, rights groups say.

Research indicates that more than eight in 10 women in Afghanistan have been sexually, physically or psychologically abused, but only a few thousand cases are reported each year.

If an unmarried woman is caught alone with a man who is not her relative, she can be accused, like Maliha, of being a prostitute.

A man and woman in Herat province, accused of being in an illicit relationship, were captured by a mob and shot in an extra-judicial killing, Herat's police spokesman said on Monday.

When women do report abuse or are arrested themselves, they find themselves at the mercy of Afghanistan's patriarchal judicial system, shaped by sharia law, women's rights campaigners say.

"In many court meetings, I could easily defend my client but the judge didn't let the proceedings be completed. The atmosphere was heavily antagonistic and many times I was called a whore or abused - just because of my choice of clients," Doost, 26, told the Thomson Reuters Foundation.

Read More: These Teen Girls in Afghanistan Are Kicking Ass—Literally

Afghanistan's roughly 500 registered women lawyers - mostly confined to the big cities of Kabul, Mazar-i-Sharif and Herat, undertake some of the most dangerous jobs in Afghan society.

They help women fleeing domestic violence and forced marriage. Divorce still remains taboo in Afghan society and if a woman wants to get a divorce lawfully, she has to navigate the male-dominated judicial system.

There is a common phrase in Afghanistan which says "a girl should come to her in-laws in a white dress and leave them in a white shroud," said Fereshta Karimi, another women lawyer working in Herat.

Among Afghanistan's women lawyers, only a few actually dare to practice in court. Doost, who represented Maliha, is one of them.

"When I took Maliha's case, she had been held in prison for nearly three years without a single appearance in court and no lawyer. I provided evidence that she was arrested in a public place and the crime (sex with a man) didn't happen and there were no witnesses for that," Doost said by phone.

"She had already spent more time than she should in prison for a crime she did not commit. The judge would not cooperate. That is why it took eight months for me to release Maliha." 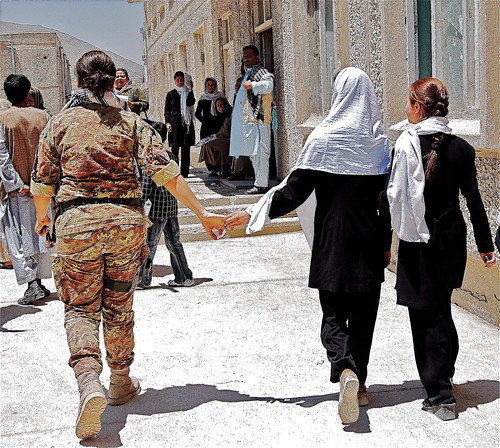 Abdul Qadir Rahimi, head of the Human Rights Commission of Afghanistan, told the Thomson Reuters Foundation they were aware of abuse of women by the police and judicial authorities.

"No specific report about rape or sexual exploitation (of women in detention) has surfaced yet, but we cannot deny such incidents occur as the system and police are corrupt in this country," he said.

There are around 100 women lawyers in Herat working under the Afghanistan Independent Bar Association (AIBA), Aziz Rafi, the head of the AIBA told the Thomson Reuters Foundation.

But most of them are working as advisors and do not appear in court because of the dangers. Fereshta Karimi has worked on more than 30 women's cases over the last six years.

"As a married woman, every day I invite unwanted danger to my family with the nature of my job," she said.

"Sometimes clients' associates come to my door to discuss the intricacy of a case, which makes my family worried and upset.

"Many times my husband has tried to stop me from working and I have to struggle every day to continue my job as a lawyer." she said.

For women like Maliha, rejected by their own families, women lawyers have been their only hope.

Maliha is now living secretly with her widowed aunt. Because of her conviction, she can't resume her studies, get a job or move freely in society. Her male relatives have threatened to kill her.

Doost has promised to send her to the capital Kabul and find her a job there.

"It may be a place where I can resume my life among unknown people," Maliha said. "My aunt keeps saying me she can't hide me for long and I am scared for my life if my brother finds me."

How Afghanistan's Female Lawyers Are Fighting Against Gender Inequality