By Elisabeth Resch  and  Shakira Donovan

900,000 Rohingya Refugees Set to Be Immunized Against Cholera

How a focus on health & sanitation can prevent the humanitarian crisis from worsening. 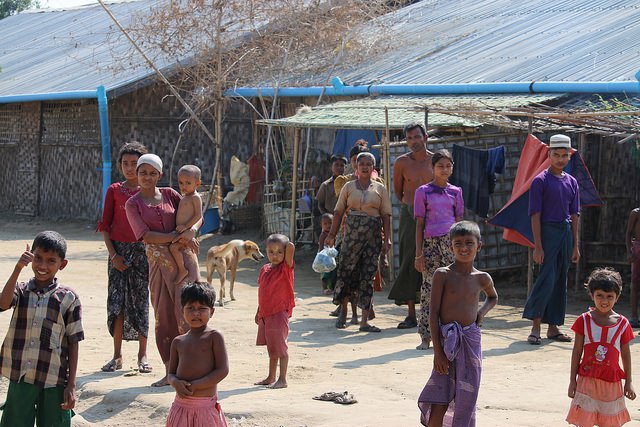 By Elisabeth Resch  and  Shakira Donovan

As the humanitarian crisis for Rohingya refugees living in Bangladeshi camps continues, 900,000 doses of a potentially lifesaving oral cholera vaccine have been deployed in response to fears that a cholera outbreak could make the situation even worse.

Cholera is a waterborne, diarrheal disease that kills 100,000 people every year, and is mostly contracted by consuming contaminated water. In light of reports that up to 180 people in the Rohingya settlements are sharing access to a single latrine, lack of clean sanitation as well as proper management of fecal sludge — or human waste — and wastewater are becoming major issues.

To avert a potential outbreak, clean water, sanitation, and hygiene have to be delivered to these camps, including through the safe collection, transportation, and treatment of waste from latrines to ensure fecal sludge doesn’t end up contaminating the surrounding environment and drinking water, in addition to vaccines to prevent people from contracting diseases in the first place.

In the weeks ahead, a large scale vaccination campaign, led by the Ministry of Health and supported by the World Health Organization and UNICEF, will see 200 mobile vaccination teams deliver the vaccines to protect the Rohingya and local host communities from cholera.

An estimated 650,000 people aged one year or older will be targeted in this first round of the campaign which launched last week. An additional 250,000 children aged between one and five years old will receive a second dose of the vaccine when the next round begins at the end of the month. The campaign is set to be the second largest oral vaccination campaign in the world, after a massive cholera vaccination drive last year in Haiti.

In the last two months, more than half a million people have arrived in Bangladesh from Myanmar, adding even more pressure to the already overrun refugee camps. Given that cholera spreads quickly in unsanitary, overcrowded environments, the camps have become the perfect place for the disease to thrive. Over 10,000 cases of diarrhea were reported throughout the camps in the last week alone, bringing urgency to the World Health Organization’s warnings that a deadly cholera outbreak could soon occur.

Read More:10,000 Rohingya Refugees Fled to Bangladesh in a Single Day This Week

However, although vaccination is crucial in the fight against cholera, it’s not the only tool for controlling outbreaks. As such, these vaccines should be delivered in combination with efforts to improve access to clean water supplies, establish adequate hygiene practices, and provide proper sanitation infrastructure.

To that end, Dr. N Paranietharan, added that “WHO is committed to mobilizing its full technical and operational capacity to support the Ministry and our partners to protect, promote and secure the health of this immensely vulnerable population.”

Read More: After a Deadly Mudslide, Sierra Leone Will Vaccinate Over 500K Against Cholera

UNICEF is currently working to scale up it’s education campaigns regarding safe water, sanitation, and hygiene practices. The World Health Organization and the Department of Public Health Engineering in Bangladesh are also working together to monitor water quality and have implemented an emergency response surveillance system. Moreover, the Health Ministry, with support from the World Health Organization, has set up diarrhea treatment centres and have procured essential supplies to allow for a rapid response in the case of an outbreak.

The need to help the Rohingya refugees in Bangladesh is becoming increasingly dire, with conditions becoming more unsafe every day.

However, this newly launched immunization program, together with efforts to improve the water and sanitation conditions in the settlements, mean that the Rohingya may be able to look forward to a healthier future.

Global Citizen campaigns on the Global Goals, which call for universal access to health services, vaccines, water and sanitation. You can take action on these issues here and here.