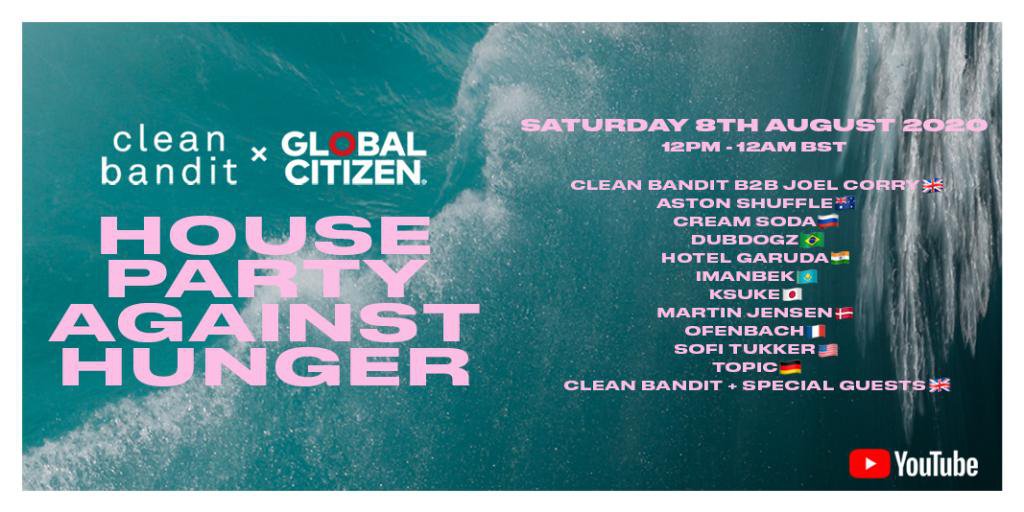 GRAMMY-winning hitmakers, Clean Bandit, are delighted to announce that they will be joining forces with international advocacy organisation Global Citizen for a very special 12-hour virtual festival, which will be hosted via a live-stream on Clean Bandit’s YouTube channel from 12 p.m. BST on Saturday 8th August, running through to midnight BST.

The band have passionately chosen to collaborate with Global Citizen to help drive impact to alleviate global hunger at a time when the pandemic threatens to double the number of vulnerable people facing starvation around the world.

Partnering with DJ’s and talent from across the globe, Clean Bandit have hand-picked the line-up for ‘House Party Against Hunger’, which includes many of their long standing friends and collaborators. Certain to be a feel-good day of music, the inimitable trio will open the festival with a very special back-to-back to set with UK No.1 dance producer/DJ, Joel Corry, who is currently riding high at the top of the UK’s Official Single Chart with his MNEK collaboration, ‘Head & Heart’.

Clean Bandit commented, “we couldn't be more excited to partner with Global Citizen on House Party Against Hunger. It's never been more important to take action; to empower the world's most vulnerable people, especially those from rural and remote communities. Before the COVID-19 pandemic, 1 in 9 people were hungry or undernourished globally, with 132 million people approaching starvation. But the economic impacts of the virus means that could double to 265 million before the end of the year."

"The world desperately needs more empathy. That's why we're backing Global Citizen's campaign calling on world leaders to do more in the fight against hunger — and urging our fans looking forward to our all-day house party on August 8 to head to their social action platform and support the campaign too. It's not about donating money. It's about raising your voice."

The full line-up can be found below -  set times will be announced via the band’s social channels next week.

Clean Bandit have remained one of pop’s most essential and dynamic forces ever since the release of their 2014, GRAMMY-winning breakout single “Rather Be” feat. Jess Glynne. With classical and electronic elements at the heart of their music - Grace, a classically-trained cellist, Jack, a producer and multi-instrumentalist, and Luke, a drummer/remixer, - their unique methods of both production and collaboration have seen Bandit pioneer their very own pop blueprint.

Meeting at university where the band curated and DJ’d at their very own club night (a night that saw Joy Orbison and James Blake make early appearances), Clean Bandit have continued to tap into their multi-genre approach; one that has seen them collaborate with a raft of superstar names over the course of their two albums, ‘New Eyes’ (2014) and ‘What Is Love?’ (2018). From Lizzo to Demi Lovato to Anne-Marie to Charli XCX, their network knows no bounds and is a testament to a group who possesses an innate ability to fuse electronic, pop, r&b, dancehall and everything in-between – something that has seen them become one of the globe’s highest-streaming acts and equally, one of the most successful British bands of recent years.

Alongside their collective achievements, each member of Clean Bandit can firmly stand behind their own solo merits, too. Jack Patterson is a 2 x Ivor Novello winner having received ‘Best Contemporary Song’ and ‘Most Performed Work’ awards in 2016 for his work on ‘Rather Be’. Grace Chatto, who was recently named as one of the ‘100 most influential female songwriters and composers in the UK’ by PRS for Music, has become a staunch voice in support of the Labour party over recent campaigns, while Luke Patterson’s flare for remixing has seen him commissioned to remodel tunes from The Killers to Robin Schulz.