Why It's Critical That Men Fight for Girls Rights, Too 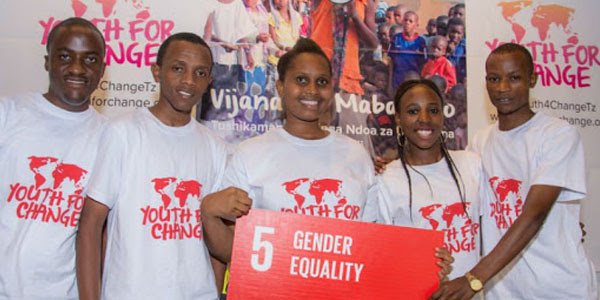 Global Citizen's #LeveltheLaw campaign calls on countries to tackle gender discriminatory laws such as the Tanzania Law of Marriage Act, introduce measures that would protect girls from violence, and advocate for gender equality under the law.

Through Youth for Change, I work to empower girls and women in Tanzania, shielding them from discrimination and helping them reach their fullest selves.

Reforming this law is one the primary targets of our campaign in collaboration with Global Citizen.

Last month, I was privileged to be part of the Global Citizen Festival in New York. It was a big opportunity for me to learn, share ideas on the work I am doing at home, and interact with experts, leaders, activists and celebrities who are passionate about ending extreme poverty. I was happy also to represent the almost three quarters of the Tanzanian population who are young people.

Read More: One man’s mission to end #ChildMarriage in Tanzania

It was also so exciting being part of 10 enthusiastic Global Citizen Youth Advocates who got to participate in the Youth Advocates Symposium, a full-day workshop which helped me build on my skills as a grassroots campaigner with young people working in different sectors such as education, water, sanitation and hygiene, and food and hunger. The discussion atmosphere was of its own kind and I was happy to improve my knowledge of how to empower girls and women.

Throughout the experience, I leanred from skilled experts like Martijn Lampert from Motivaction and Global Citizen Co-Founder Simon Moss, and sharing ideas with a very inspirational woman, mother and one of Microsoft's Vice President, Toni Townes-Whitley.

Thursday evening at the NYU Skirball Theatre, I was excited to be on stage with the world-class actor, director and SDG Advocate, Forest Whitaker. On stage, we discussed the campaign I am running to raise the age of marriage to 18 in Tanzania. At one point, Mr. Whitaker asked a good question: why is it important for me (a man) to advocate for girls rights, especially since Tanzanian culture is very patriarchal.

Men have a critical role to play in ending gender inequality, changing sexist laws and negative gender stereotypes. It is so sad to see a man as old as my father marrying a child as old as 14 or younger — and still the law will gives blessings to that "marriage." To me this is unacceptable. This is why I believe men should be spearheading campaigns to change the law and stop marrying young girls. Instead, we must ensure girls have the opportunities to pursue an education and are allowed to choose who they marry when they want.

Being at the Great Lawn in Central Park during the 2016 Global Citizen Festival has been one of the most inspirational moments of my life, among thousands of Global Citizens who are taking action to make the world we want to see.

I was in the Action Hub with Salma Hayek Pinault and Andy Cohen, who are not only championing gender equality but also calling for an end to child marriage in Tanzania. Salma and Andy urged people around the world to tweet President Magufuli and ask him to tackle child marriage and protect the 15 million girls who are forced to get married every year. Girls who are denied their right to education are more vulnerable to health and psychological problems.

I was thrilled when Forest Whitaker introduced on stage Norwegian Prime Minister Erna Solberg, Former Prime Minister of Australia Julia Gillard, and Former President of Tanzania Dr Jakaya Kikwete, who spoke about the Global Partnership for Education. While speaking, Dr Kikwete said that there will be 800 million school dropouts by 2030 if no investment on education is made. I am alarmed that with the 15 million girls who are forced into marriages every year, the effect is worse to girls.

It was also a great feeling to hand over more than 25,000 petition signatures to the Former President of Tanzania and the Global Ambassador for Immunization Jakaya Mrisho Kikwete (@jmkikwete). Mr. Kikwete has been a good champion committed to education and empowering girls and women.

Following the call to action, thousands of people around the world have been tweeting to change the 1971 Tanzania law of Marriage. This includes members of parliament who want this to be an urgent action by the government.

Mr. Ridhiwani Kikwete, Tanzania MP tweeted "Change begins with you. Let us start with this."

The High Court of Tanzania ruled in July, on Rebecca Gyumi's case, that the Law of Marriage Act must be revised to eliminate inequality between the minimum age of marriages for boys and for girls.

It is still not yet done. We need to stand together to ensure our young sisters and daughters are not married young, and rather get an  education, pursue their dreams and marry when they want.  We must  take action NOW!