From the Civil Rights Movement to the 2008 US election.

Why Global Citizens Should Care
Exercising the right to vote is crucial to maintaining a fair democracy. When young people mobilize to have a say in who’s elected, they influence change.You can join us in taking action on this issue here.

Young people make a difference when they rally around the right to vote.

But sometimes millenials need a push to get politically involved. In 2016, only 46.1% of US citizens between ages 18 and 29 reported voting to the Census Bureau. One recent study found the age group wasn’t sending in their absentee ballots, simply because they didn’t know where to buy stamps.

Take Action: Call on G20 Leaders to Commit to a Fairer Future

The right to vote shouldn’t be taken for granted. In places that don’t practice democracy, citizens don’t have the privilege to appoint the leaders who make big decisions for them. Women in Saudi Arabia were only allowed to vote in local elections as recently as 2015. Historically, groups such as black people, Native Americans, and women couldn’t vote in the US until the 20th century.

The Civil Rights Movement is only one example of how young people have successfully advocated for voter rights in the US and around the world. Most recently, student activists organized to urge young people to take a stand in future elections. Thousands of people registered to vote at the March for Our Lives in Washington, DC, as a result, marking how powerful young people can be when they show up in numbers.

Voter registration campaigns have been in full swing since National Voter Registration Day on Sept. 25. As registration deadlines and the midterm elections approach, here are five times young people reminded each other to exercise their freedom and saw groundbreaking results.

The Student Non-Violence Coordinating Committee (SNCC) was formed in 1960 to give black youth in the US a voice in the Civil Rights Movement. The group led many voter registration drives in the South as part of the Voter Education Project. Activist Bob Moses initiated the voter registration project in McComb, Mississippi, during a time when registering black people to vote was extremely risky and put them in danger of losing their jobs, homes, and sometimes lives with little protection from the police.

#OTD in 1966: James Meredith is shot and wounded on his 220-mile "March Against Fear," a black voter registration effort in Mississippi. Thousands of activists, including our late host, D'Army Bailey, pressed onward. An indomitable Meredith rejoined the march near its conclusion. pic.twitter.com/ZPyT2L2JgV

Fired up from leading voter registration efforts, the SNCC went on to use the voter registration momentum to advocate for the desegregation of schools in areas ruled by Jim Crow segregation laws. They persevered despite enduring physical violence and are credited as one of the most well-organized civil rights groups who fought for racial equality in the country.

Young people in the US under 21 couldn't vote before 1971. When students fought for their right to protest in opposition of the Vietnam War, their resistance led the public to agree it was unfair for men to be drafted war who weren’t of age to vote. In response, Nixon signed the 26th Amendment to lower the voting age to 18.

1/ During WW2, Pres. Roosevelt lowered the draft age to 18. During the Vietnam War, while young men were being drafted at 18, only a handful of states allowed voting at that age. The result? Widespread youth protests demanding to lower the voting age to the draft age... pic.twitter.com/CxYRrPiqbW

In 1976, a series of demonstrations and protests were led by black students in South Africa who were fed up with the 1974 law mandating all schools in the country be taught in Afrikaans — the language spoken by Dutch settlers —and English. Police attacked students for protesting which stirred outrage from the African National Congress (ANC). The ANC organized students who continued fighting to end apartheid, South Africa’s system of institutionalized racism that existed in the country between 1948 and 1994.

Those courageous schoolchildren protested for equality in education and, many believe, #SowetoUprising was major catalyst to end apartheid pic.twitter.com/3mvR5T0HaL

Regardless of the results, the 2008 presidential election in the US was a victory for all young people. Polls showed 54.5% of Americans ages 18 to 29 voted — a percentage largely unseen since 1972.

While young people weren’t solely responsible for Barack Obama’s victory, Pew Research reported the number of youth who volunteered with his campaign, attended events, and turned older family members onto the candidate definitely made a difference.

Young people have helped lead all our great movements. How inspiring to see it again in so many smart, fearless students standing up for their right to be safe; marching and organizing to remake the world as it should be. We've been waiting for you. And we've got your backs.

Read More: What Democracy and Voting Rights Look Like Around the World

Students at Marjory Stoneman Douglas High School in Parkland, Florida, took school safety laws into their own hands after 17 people were killed during a mass shooting at their school. Young activists like students Emma González and David Hogg organized their peers on social media in the wake of the tragedy they witnessed. Activists channeled their outrage into action at small walkouts that turned into historical protests, like March for Our Lives in Washington, DC.

Committed to seeing higher voter turnout, the protest motivated thousands of young attendees to register to vote. Organizers encouraged citizens to show up at the midterm election polls.

Make sure you aren’t one of the millions of people that have been purged from voter rolls!

Check your voter registration here https://t.co/lJiTQIQCLP or on your department of State website. #DontBePurgedhttps://t.co/F1l9TWVWUC

“When people try to suppress your vote, and there are people who stand against you because you're too young, we say, 'No more!'" Hogg told the crowd at March for Our Lives in March 2018. 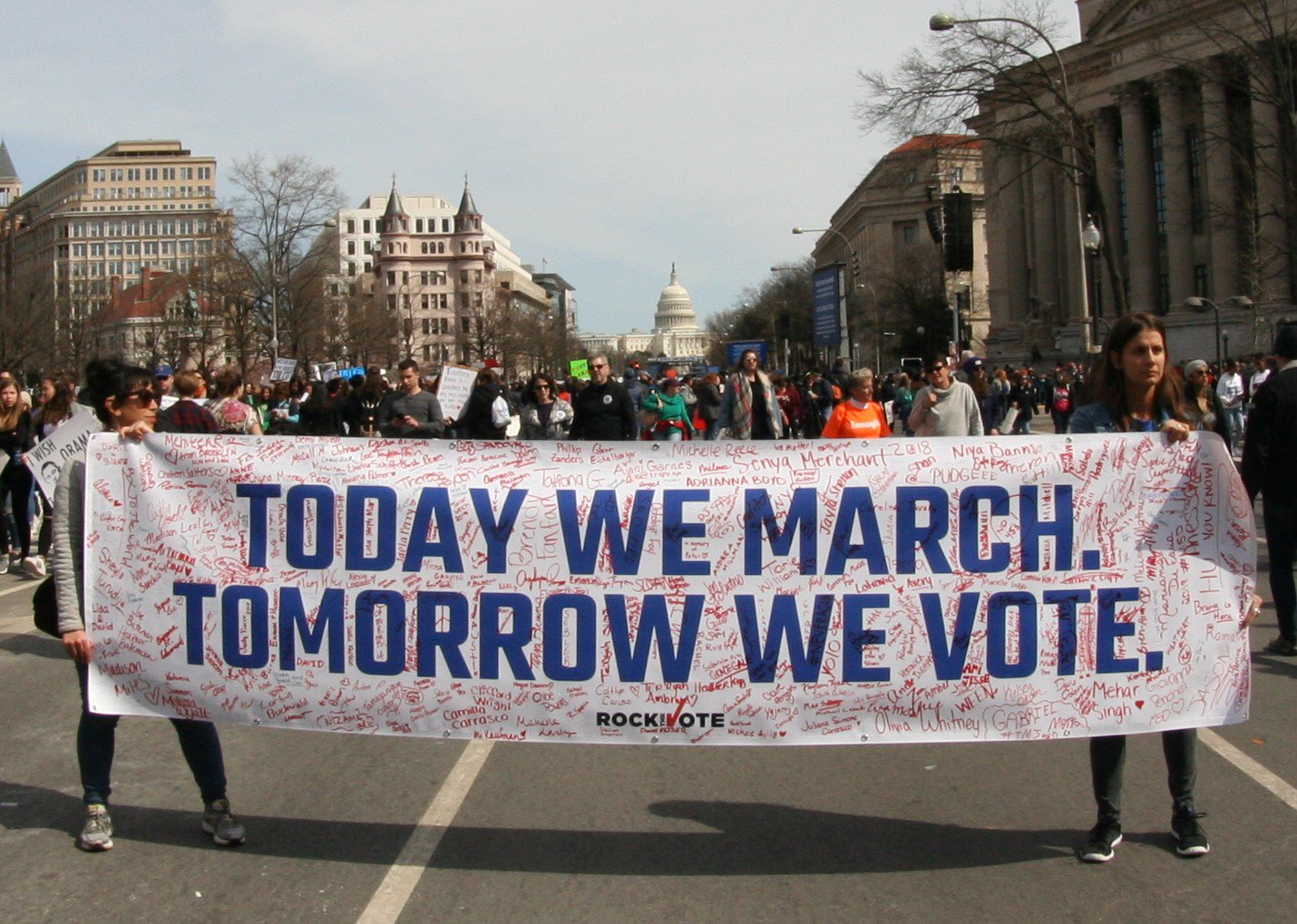 As a result, there’s already been a noticeable boost in voter registration among younger demographics.