After reviewing 73,044 images from more than 4,500 international photographers, the World Press Photo Foundation released its nominees for the year’s best photo Wednesday. The award is considered one of the most prestigious achievements in photojournalism.

The six photos nominated for the ultimate prize use the camera lens to tell powerful stories about the phenomena that shape our world, including refugee crises, violent unrest, and the strength of humanity in the face of unthinkable challenges.

In addition to the top prize, the World Press Photo Foundation also recognizes the best photos in various categories, such as sports, environment, and spot news. Nominees feature a man engulfed in flames during violent protests in Venezuela and amazing aerial shots of deforestation along the Amazon.

The winners will be announced at an awards show in Amsterdam on April 12, but, the foundation said, each project brought necessary stories to life for people around the globe.

Take action: Help the Most Marginalised and Vulnerable Find Shelter

“The best visual journalism is not of something; it is about something.” said Lars Boering, the managing director of the World Press Photo Foundation. “It should matter to the people to whom it speaks.”

These World Press Photo Foundation nominees matter for anyone striving to understand our turbulent world.

Nominees for the World Press Photo of the Year: 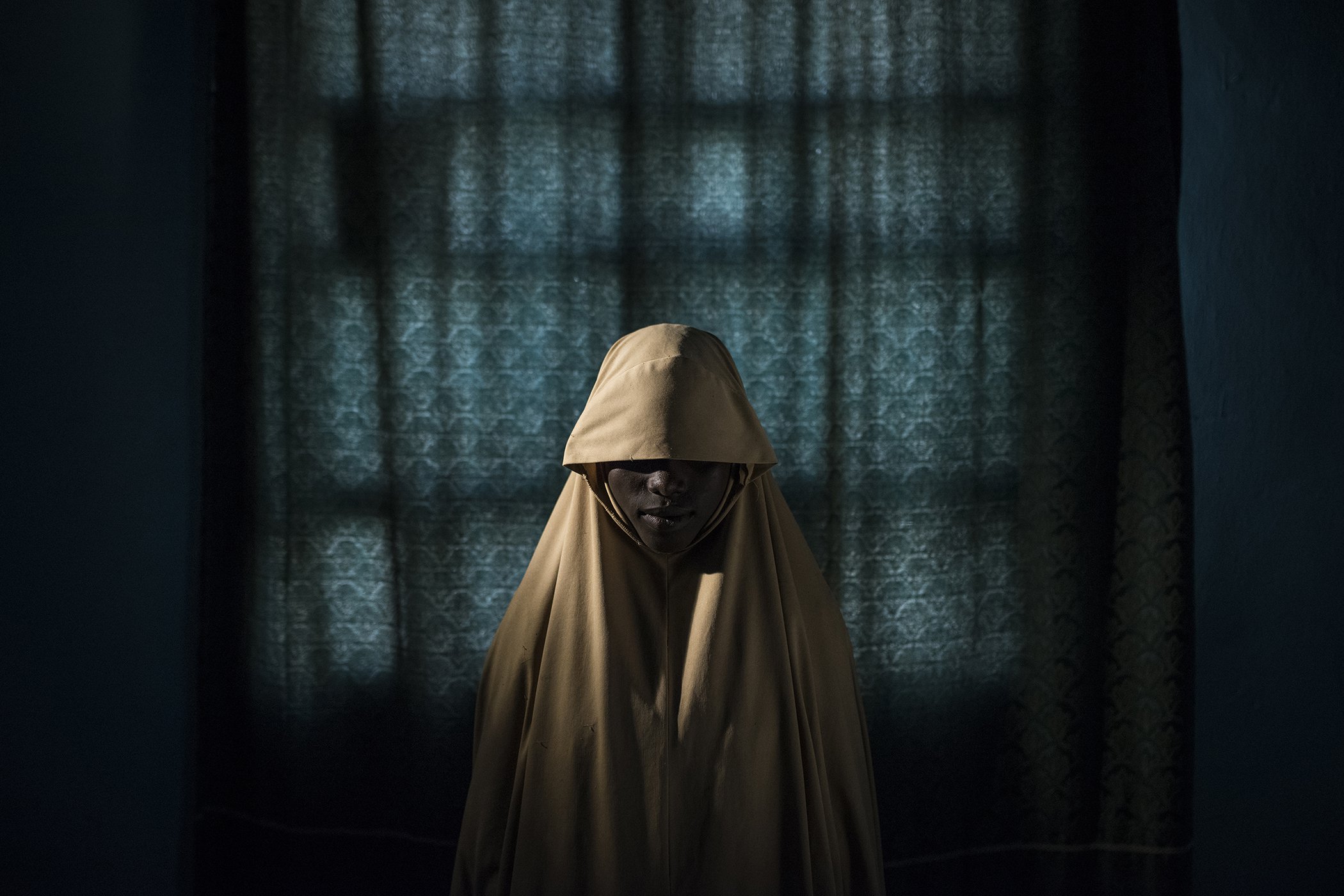 Aisha (14) stands for a portrait in Maiduguri, Borno State, Nigeria. After being kidnapped by Boko Haram, Aisha was assigned a suicide bombing mission, but managed to escape and find help instead of detonating the bombs.
Image: © Adam Ferguson, for The New York Times 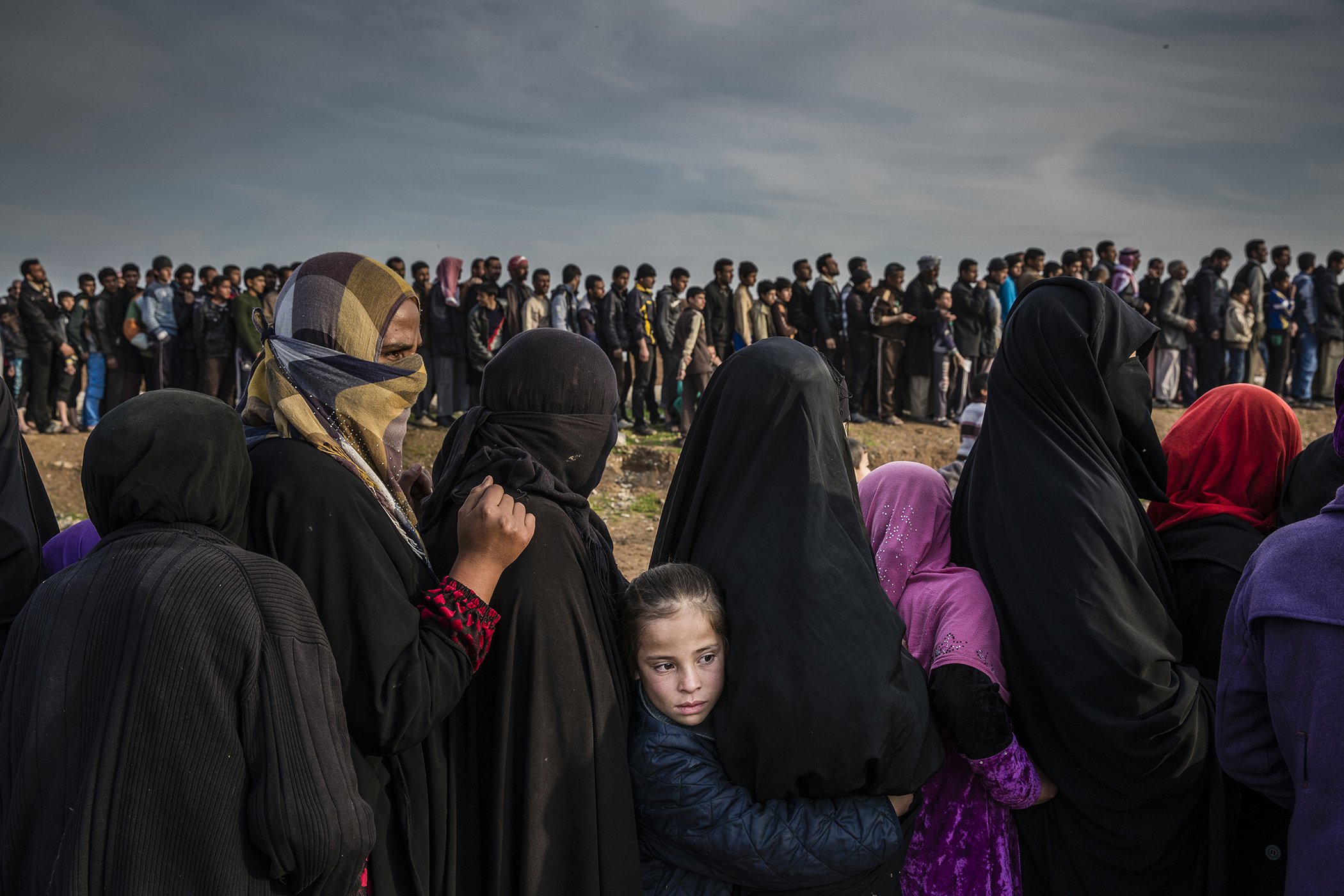 Civilians who had remained in west Mosul after the battle to take the city line up for aid in the Mamun neighborhood.
Image: © Ivor Prickett, for The New York Times 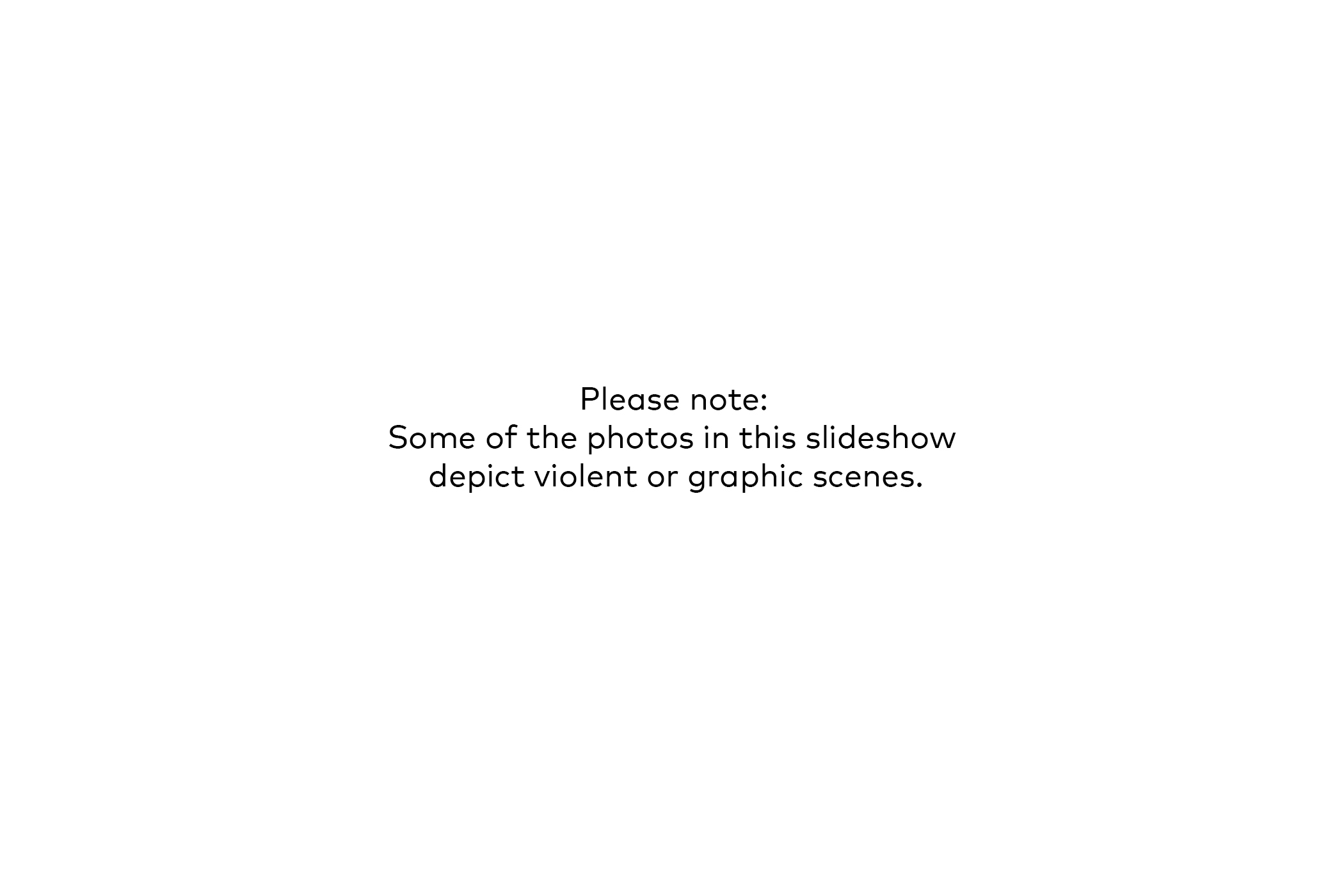 Photo of the Year 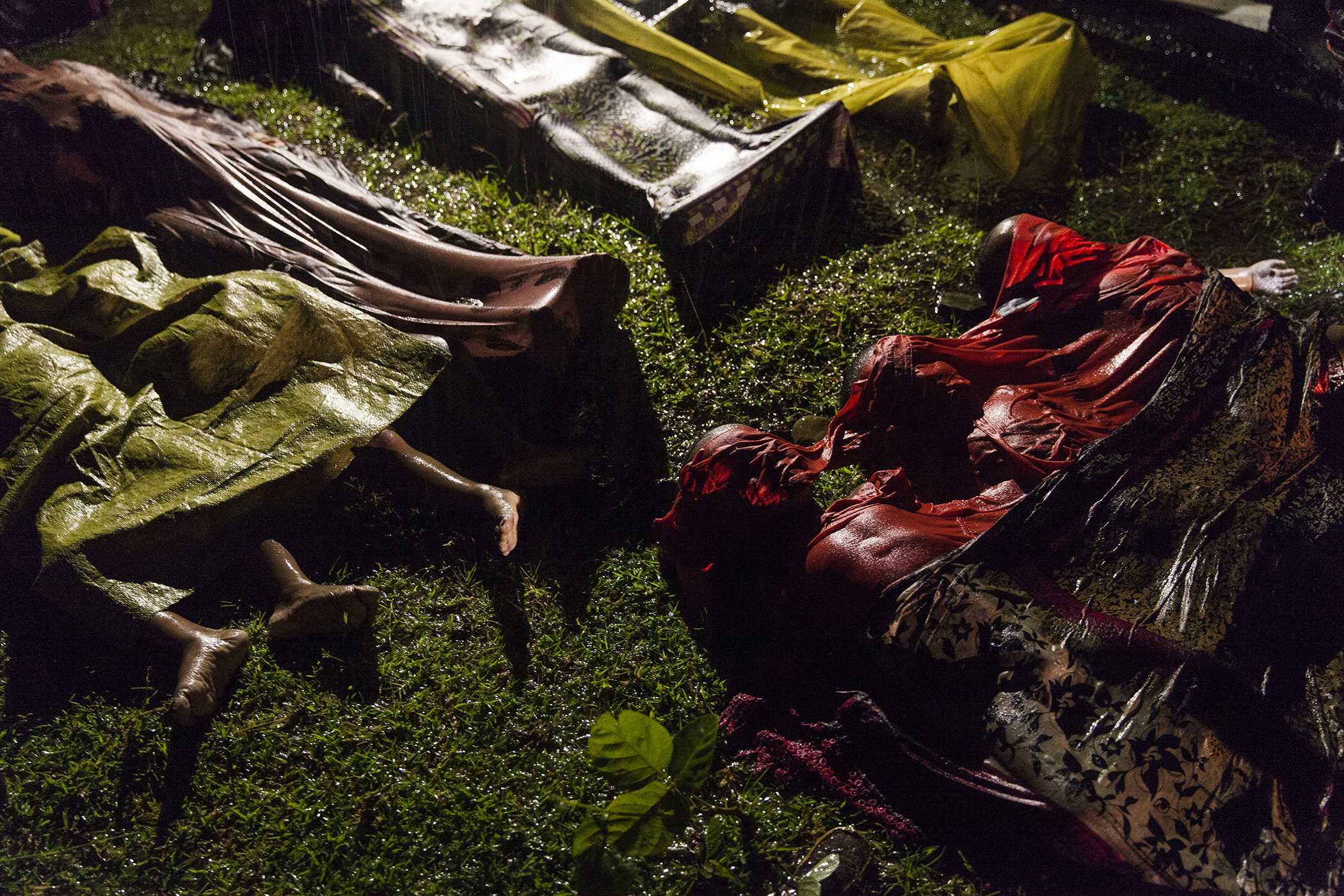 Rohingya Crisis
The bodies of Rohingya refugees are laid out after the boat in which they were attempting to flee Myanmar capsized about eight kilometers off Inani Beach, near Cox's Bazar, Bangladesh. Around 100 people were on the boat before it capsized. There were 17 survivors.
© Patrick Brown, Panos Pictures, for Unicef 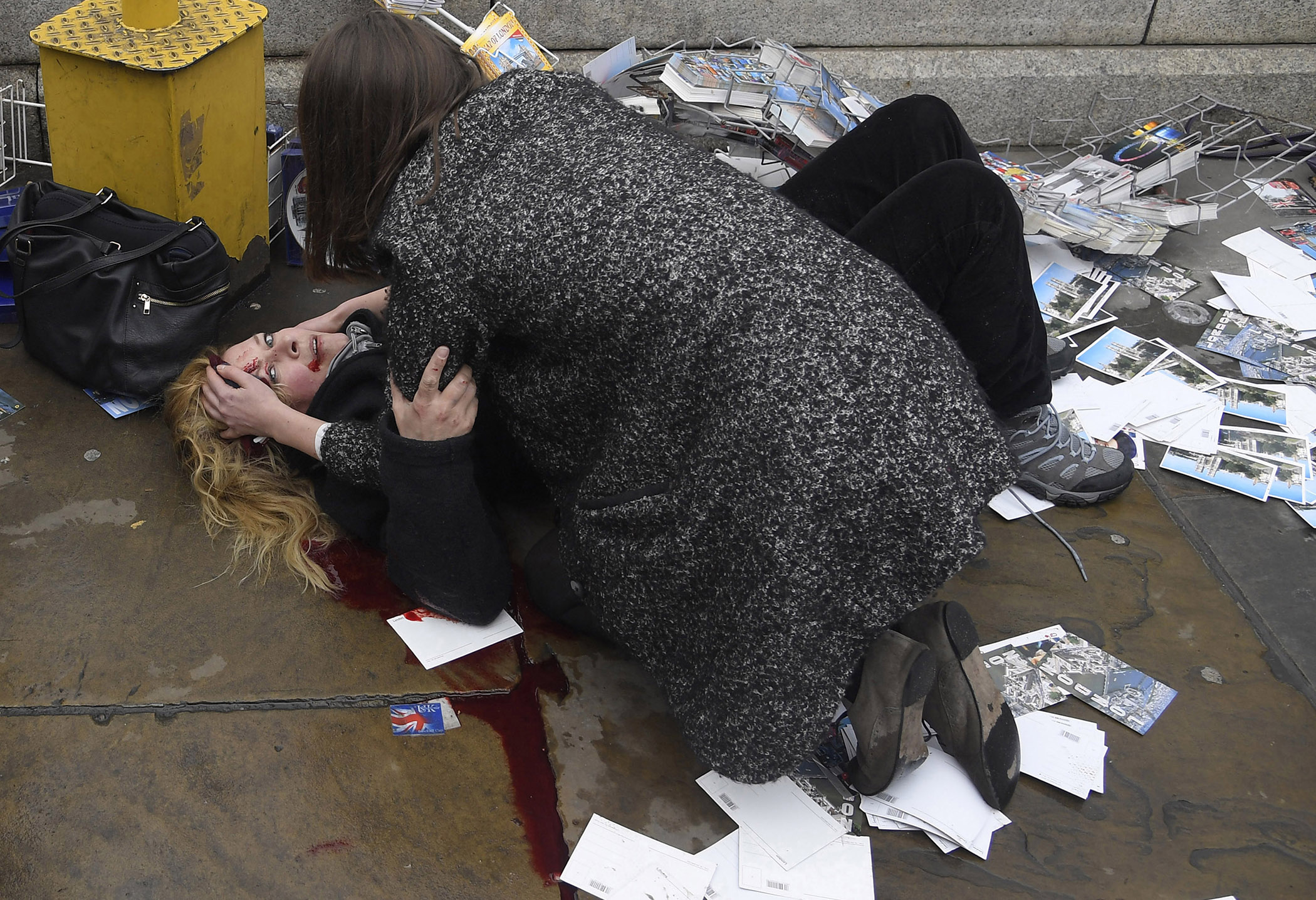 Witnessing the Immediate Aftermath of an Attack in the Heart of London
A passerby comforts an injured woman after Khalid Masood drove his car into pedestrians on Westminster Bridge in London, UK, killing five and injuring multiple others.
© Toby Melville, Reuters 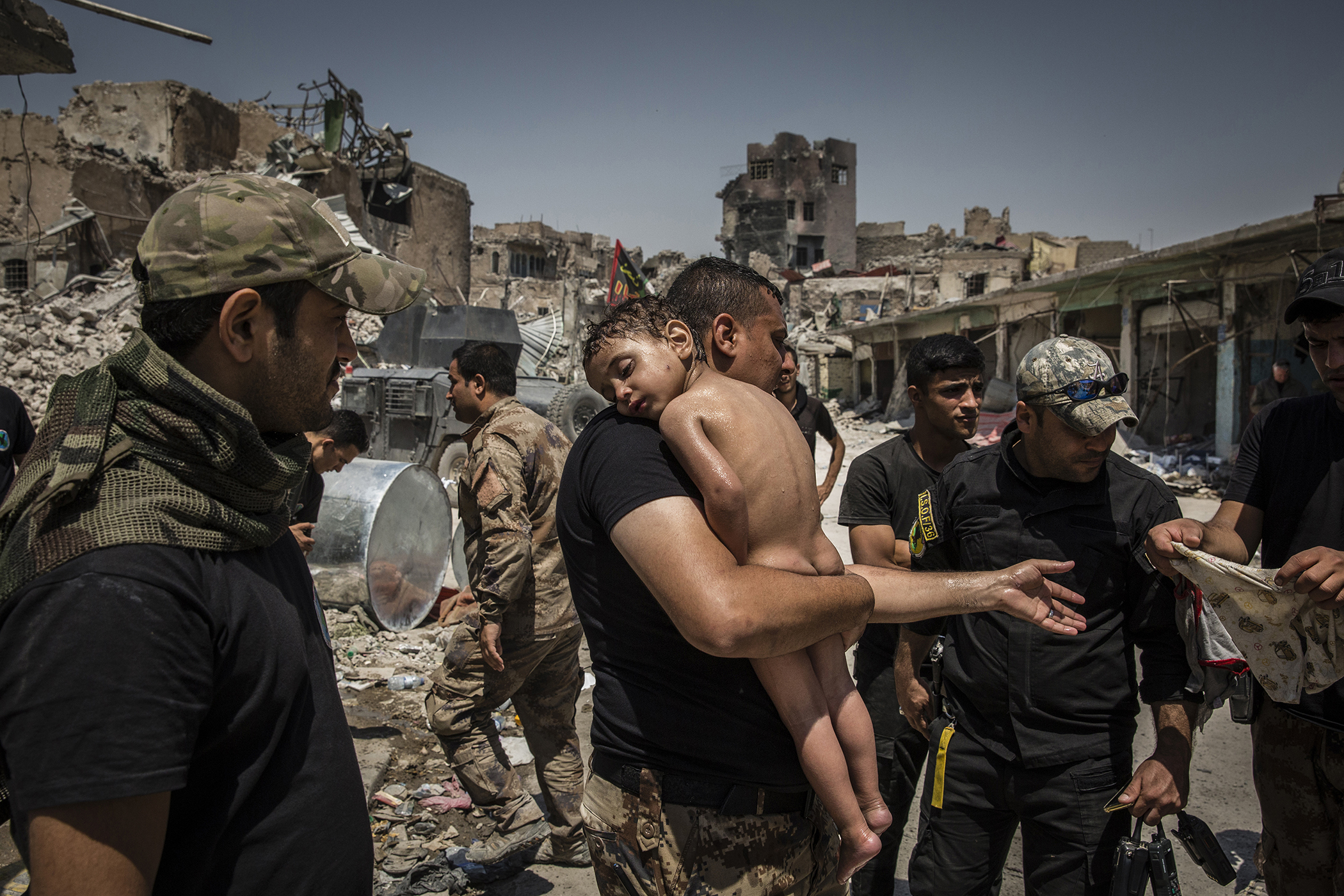 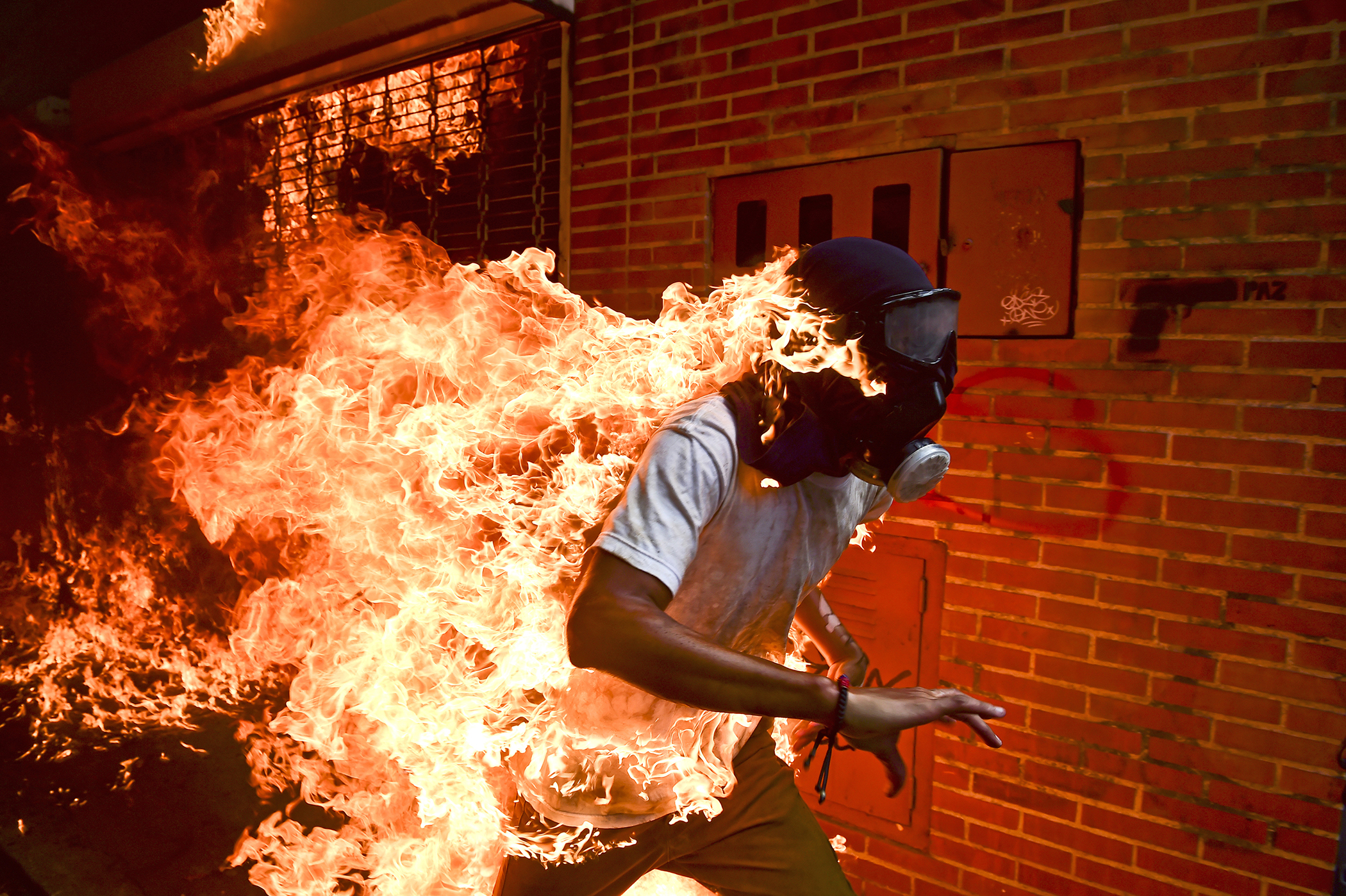 Below is a selection of images nominated in the categories of general news, environment, contemporary issues, nature, people, sports, spot news, and long-term projects. 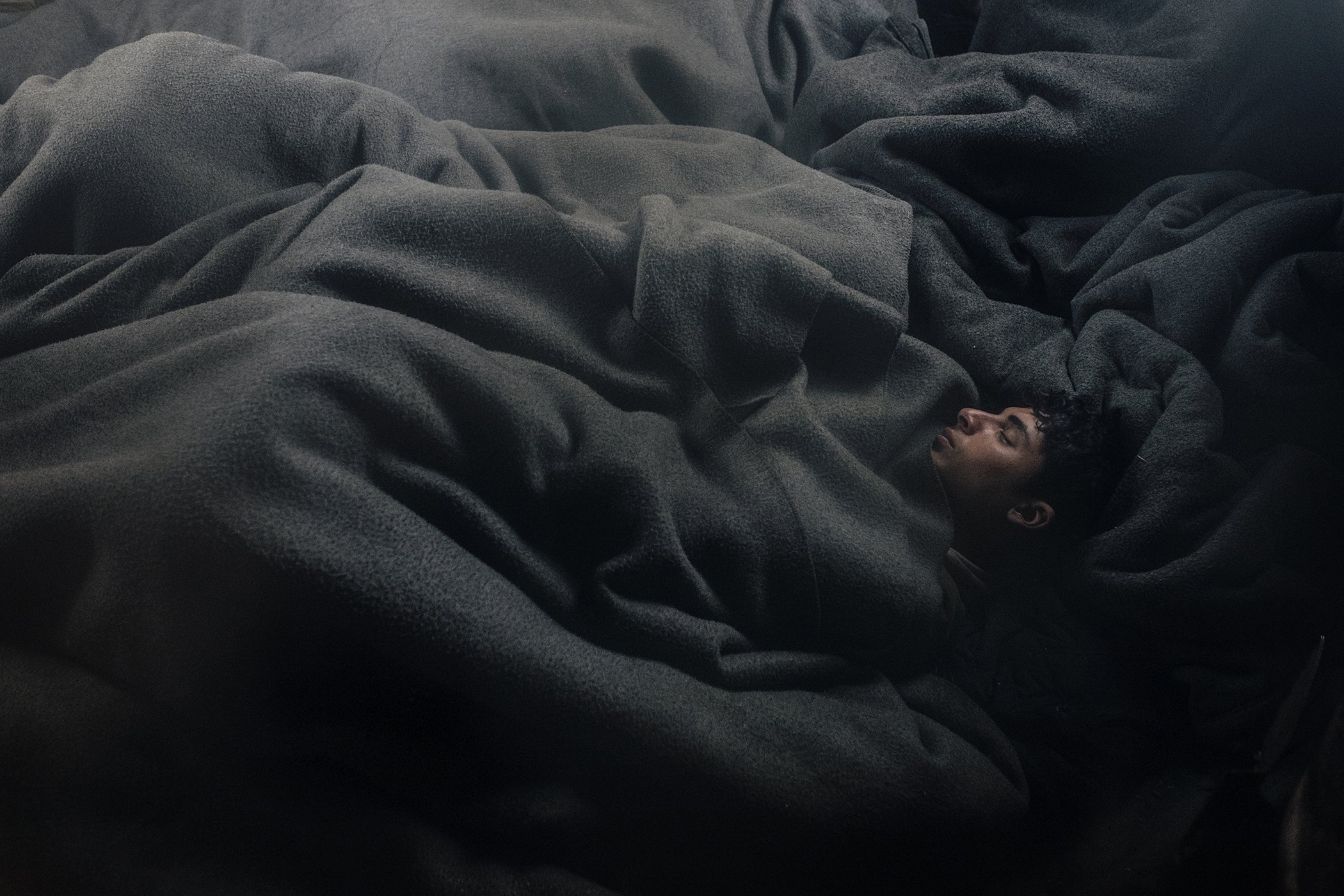 Lives in Limbo: The tightening of the Balkan route into the EU stranded thousands of refugees attempting seek a new life in Europe. Many spent the freezing Serbian winter in warehouses behind Belgrade's train station. Nominated in the General News Stories
Image: © Francesco Pistilli 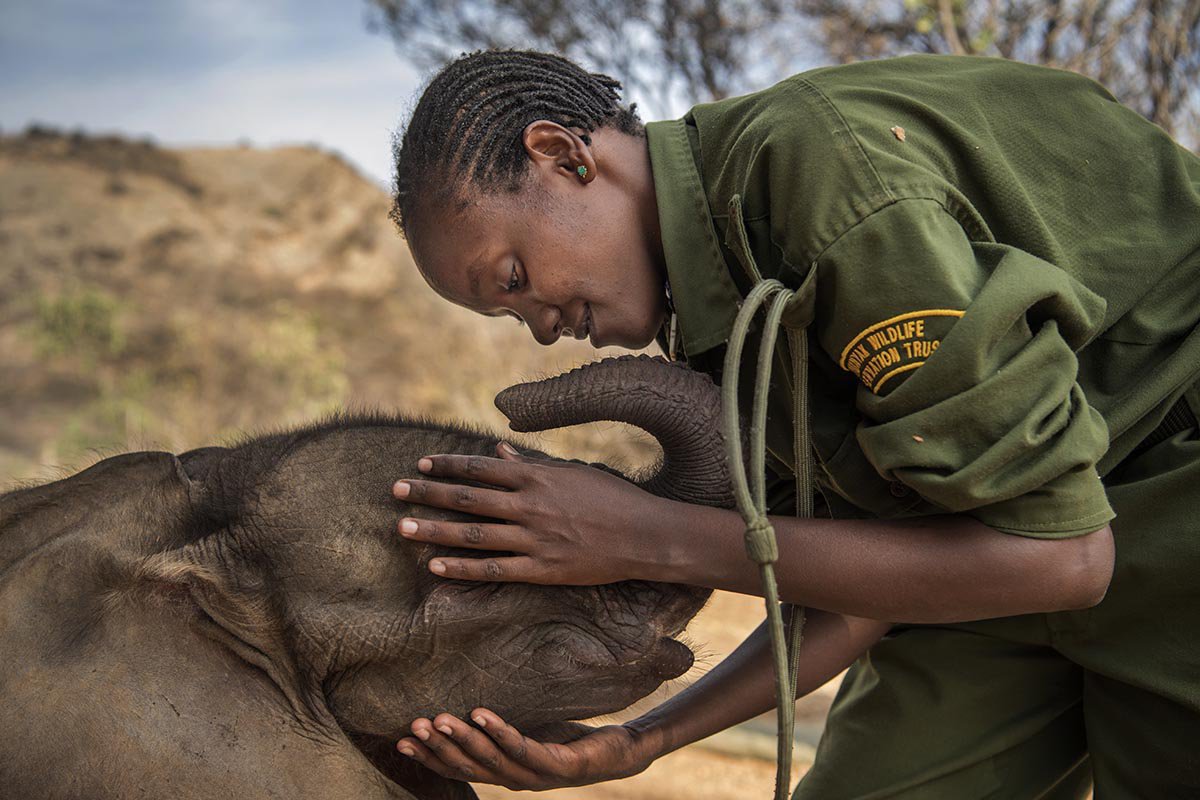 Warriors Who Once Feared Elephants Now Protect Them: Orphaned and abandoned elephant calves are rehabilitated and returned to the wild, at the community-owned Reteti Elephant Sanctuary in northern Kenya. Nominated in the Nature Stories category.
Image: © Ami Vitale, for National Geographic 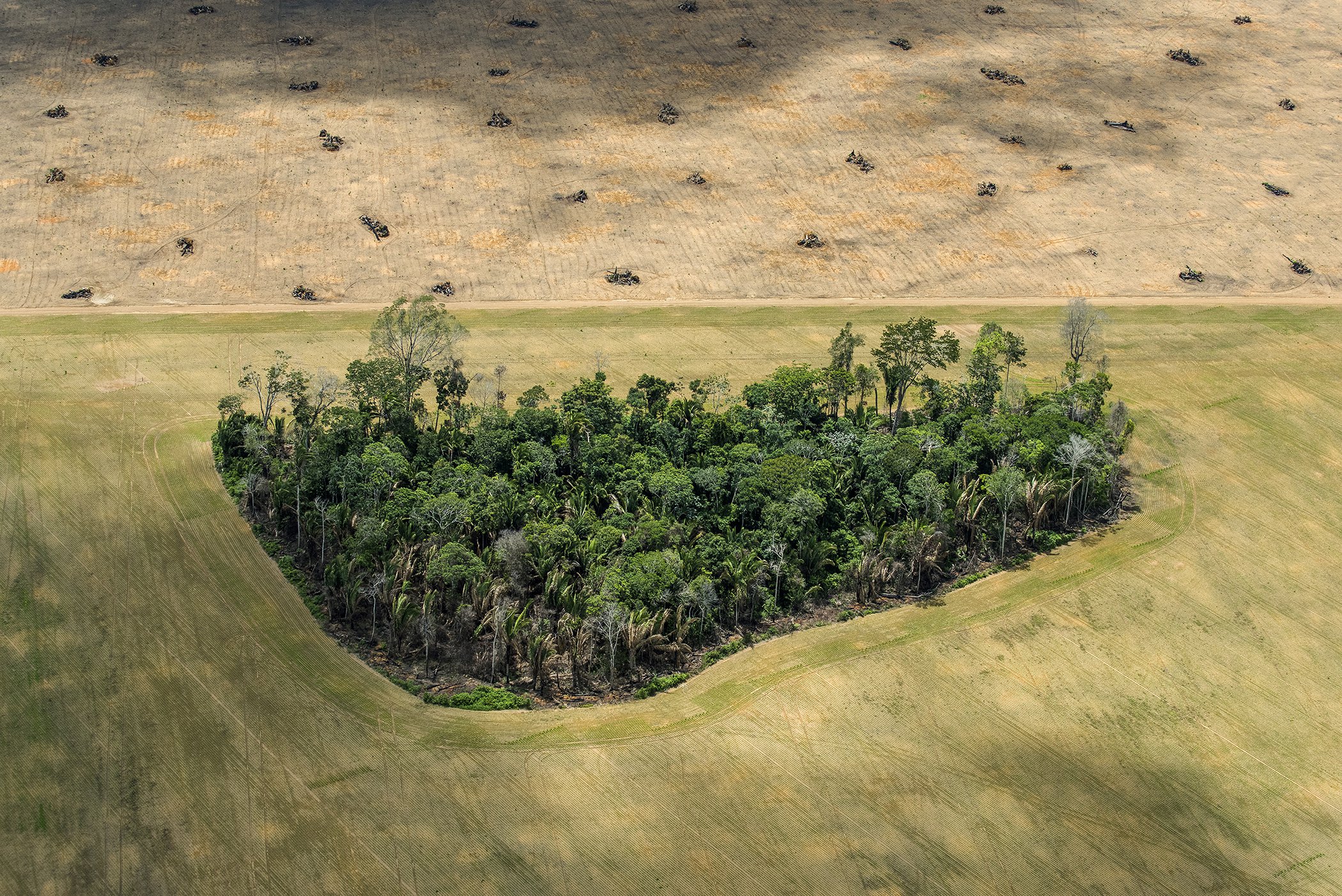 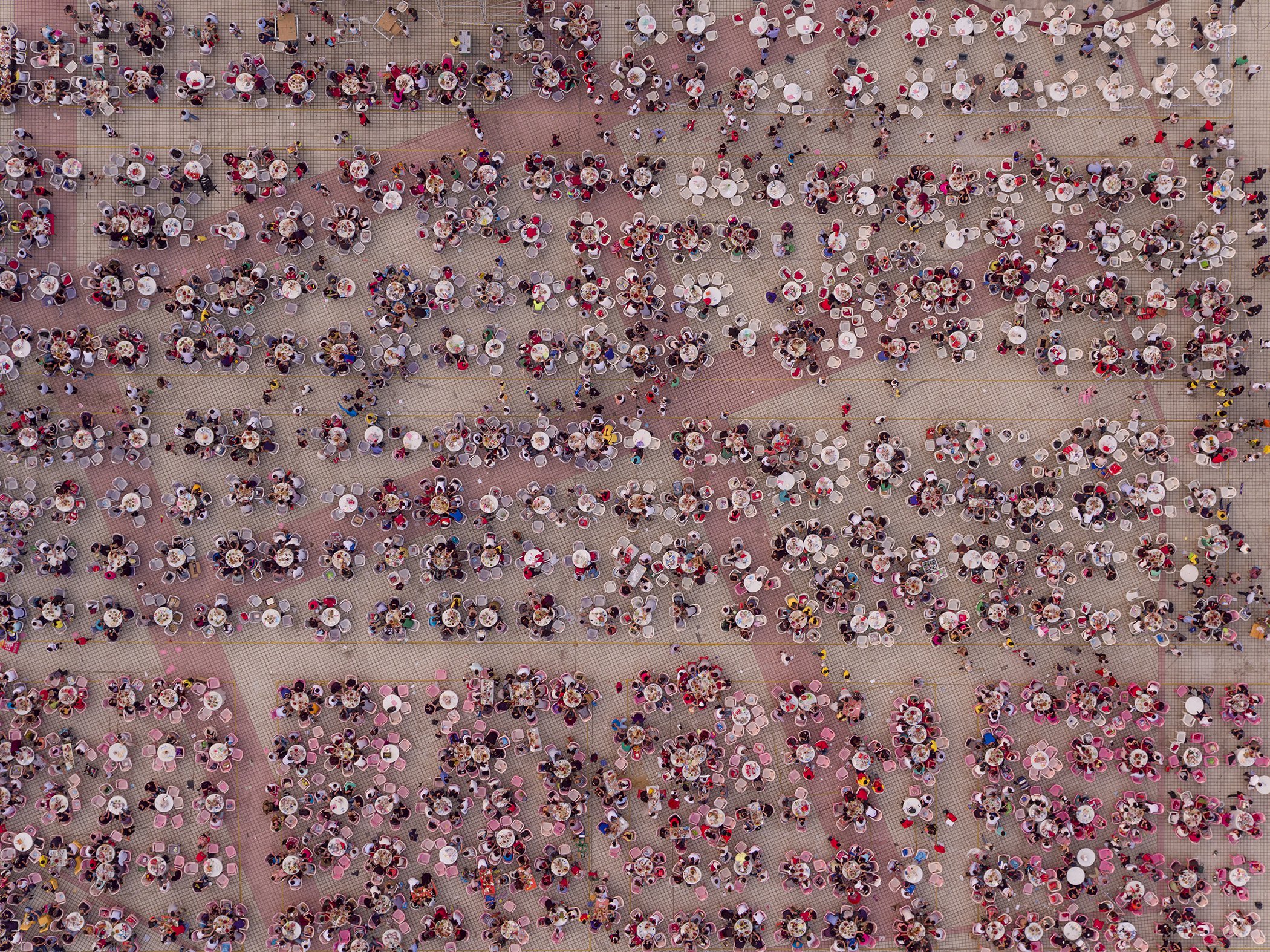 Feeding China: Rapidly rising incomes in China have led to a changing diet and increasing demand for meat, dairy and processed foods. The food and agricultural industry is under pressure. Nominated in the Contemporary Issues Stories category.
Image: © George Steinmetz, for National Geographic 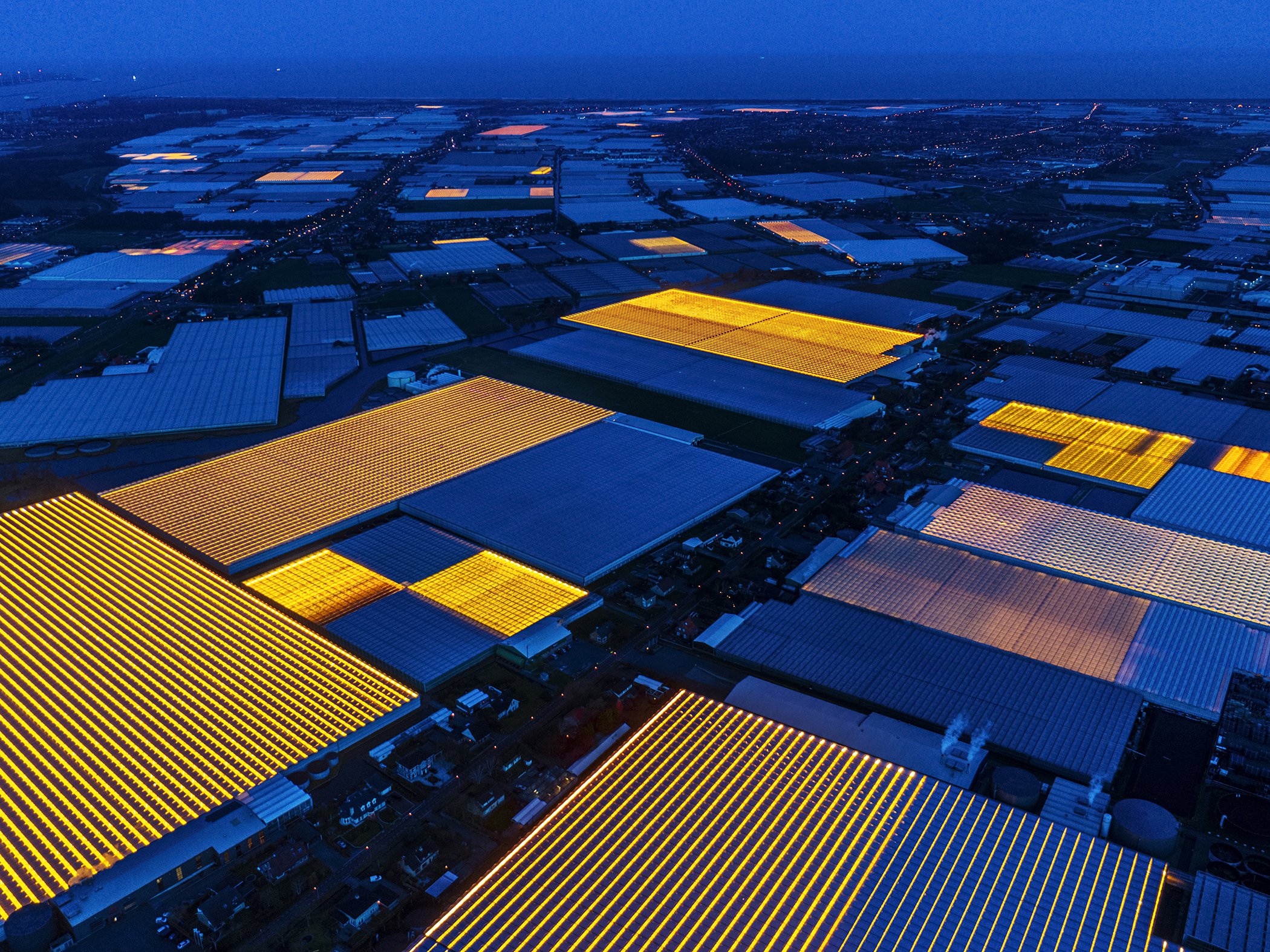 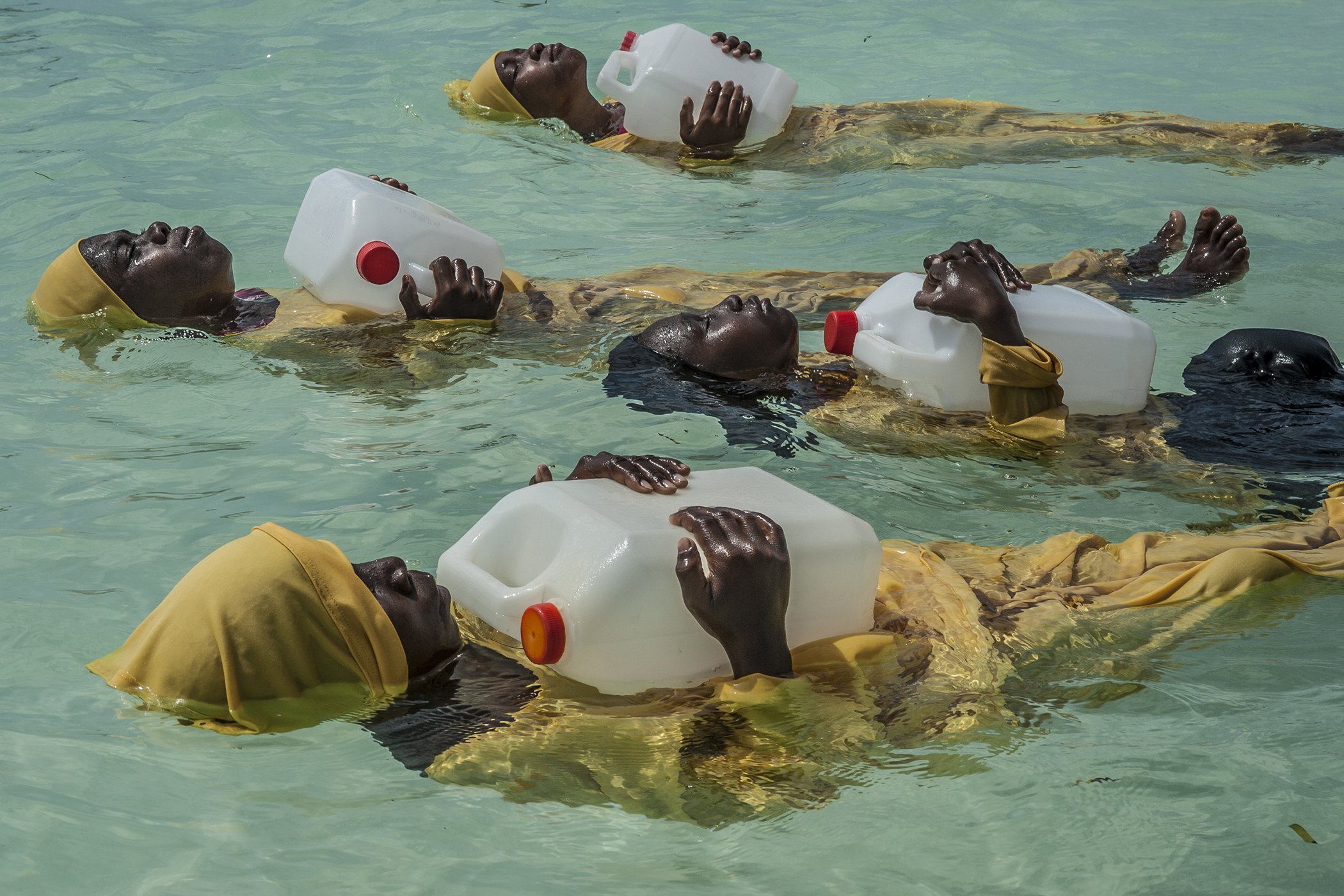 Finding Freedom in the Water: Girls in the Zanzibar archipelago, Tanzania, learn how to swim in full-length swimsuits so that they can be in the water without compromising their cultural or religious beliefs. Nominated in the People Stories category.
Image: © Anna Boyiazis 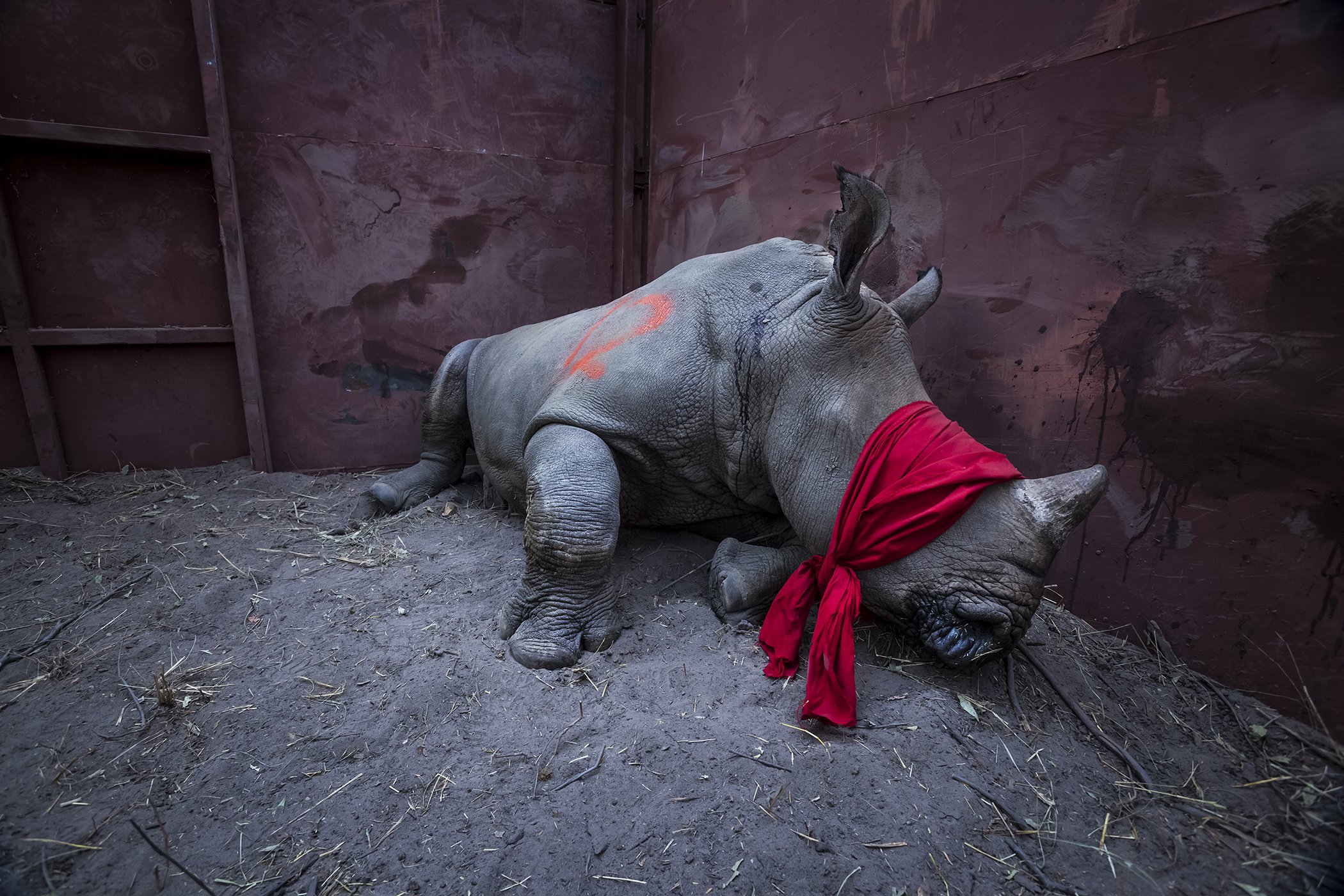 Waiting For Freedom: A young white rhino, drugged and blindfolded, about to be released in Okavango Delta, Botswana, after its relocation from South Africa for protection from poachers. Nominated in the Environmental Singles category.
Image: © Neil Aldridge 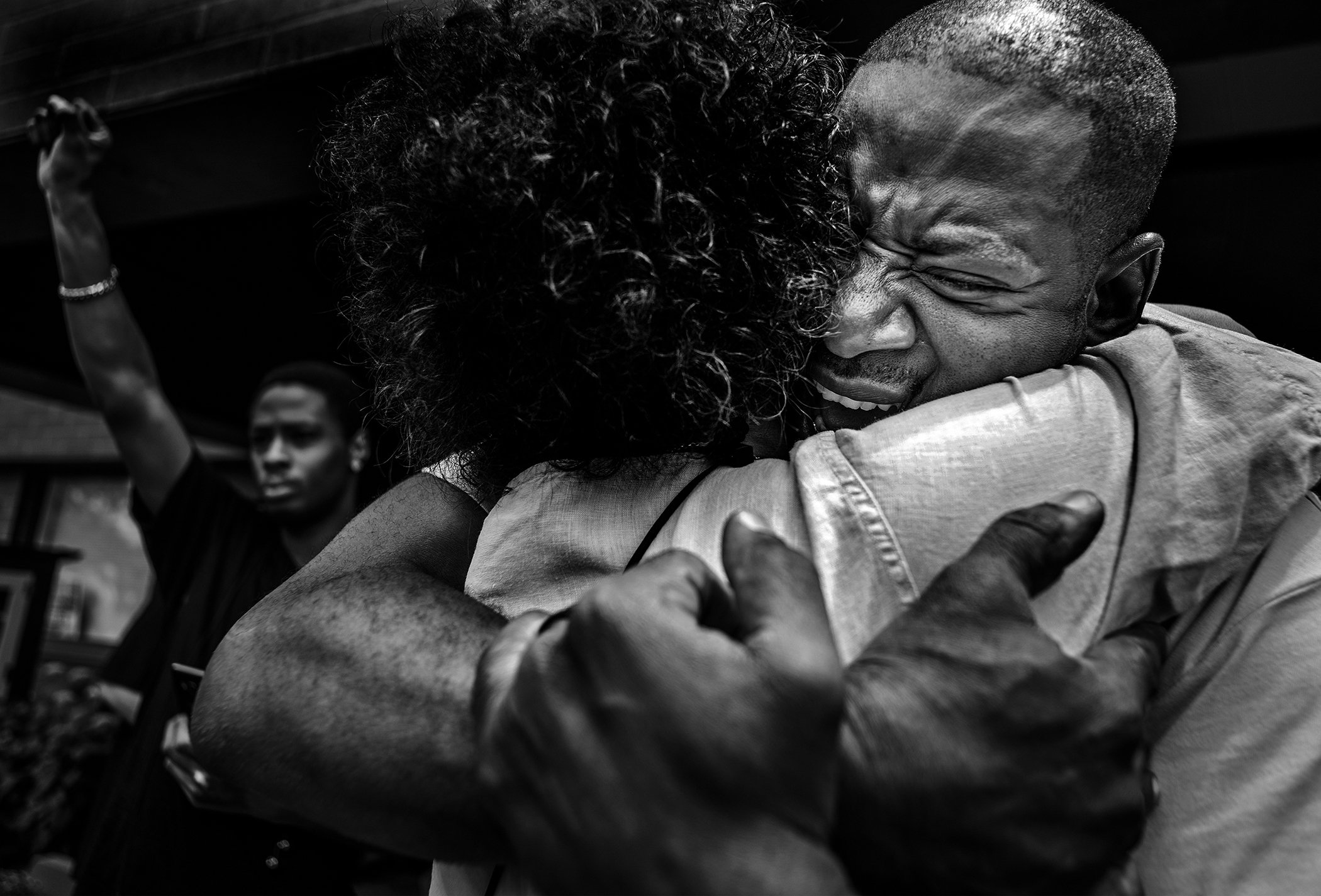 Not My Verdict: John Thompson is embraced after speaking at a memorial rally in Minnesota for his friend Philando Castile, 2 days after the police officer was acquitted of all charges in Castile's shooting. Nominated in the General News Singles category.
Image: © Richard Tsong-Taatarii, Star Tribune 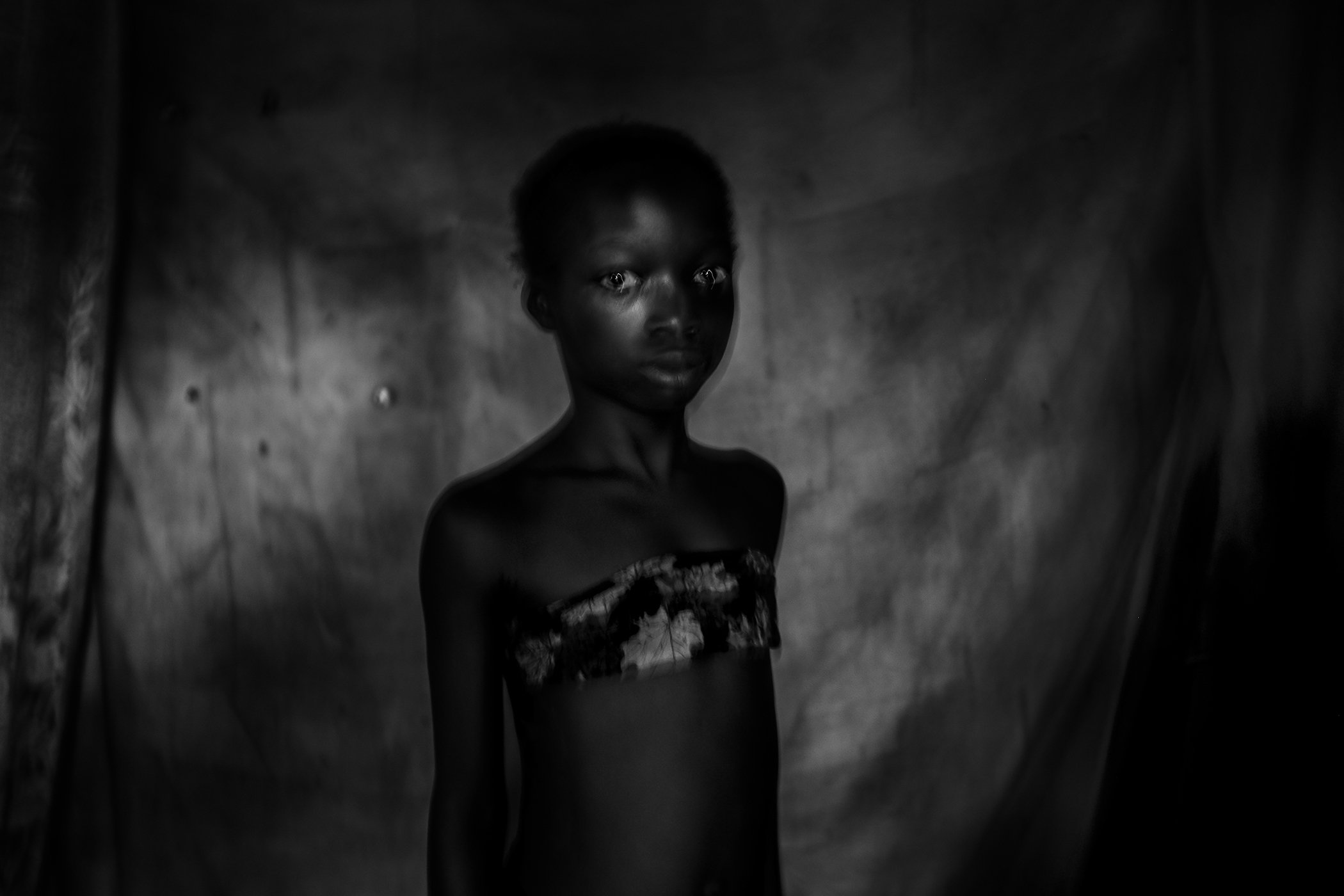 Banned Beauty: The practice of breast ironing for girls between the ages of 8 and 12 in Cameroon is carried out in the belief that this will delay maturity and help prevent rapes or sexual advances. Nominated in the Contemporary Issues Stories category.
Image: © Heba Khamis 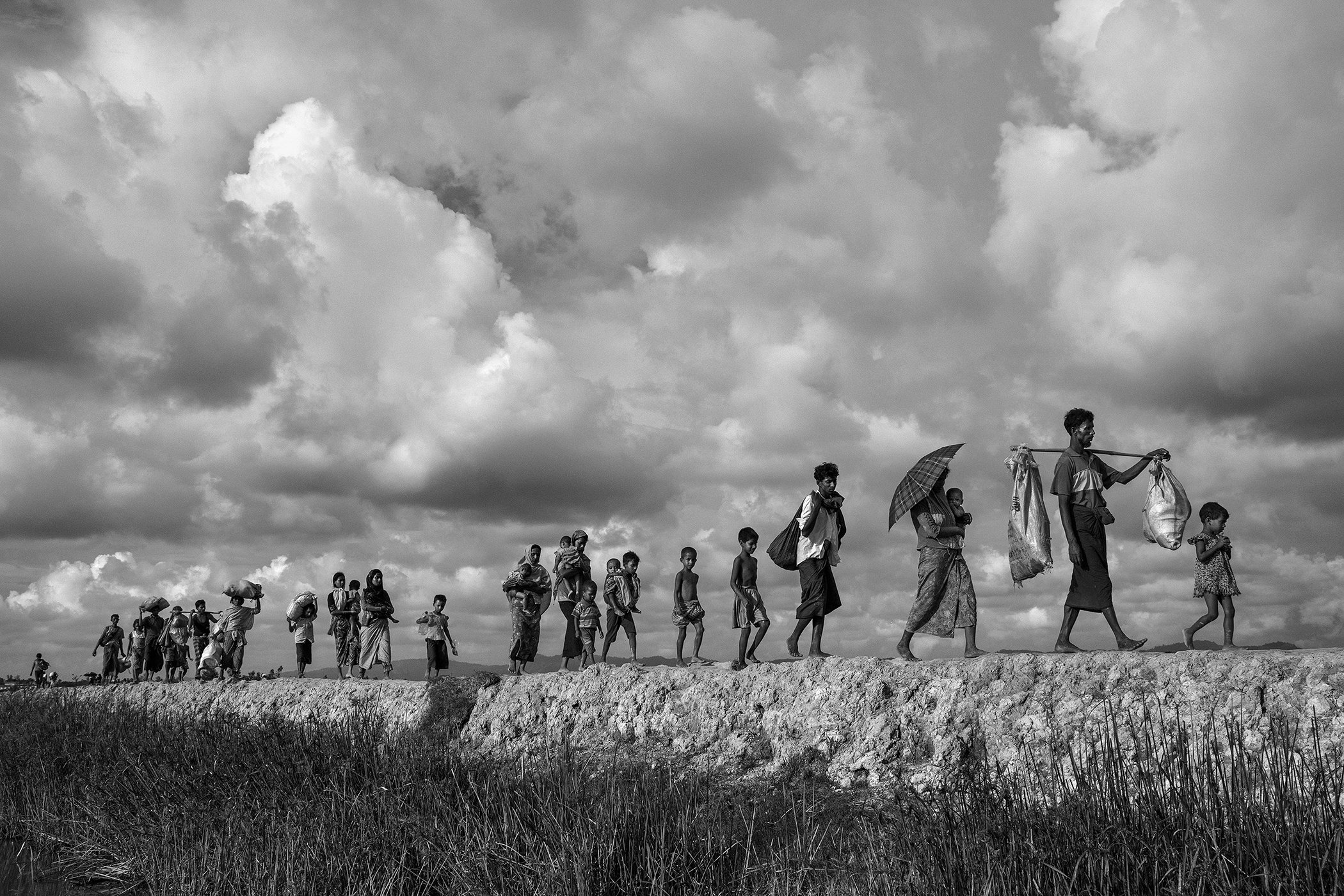 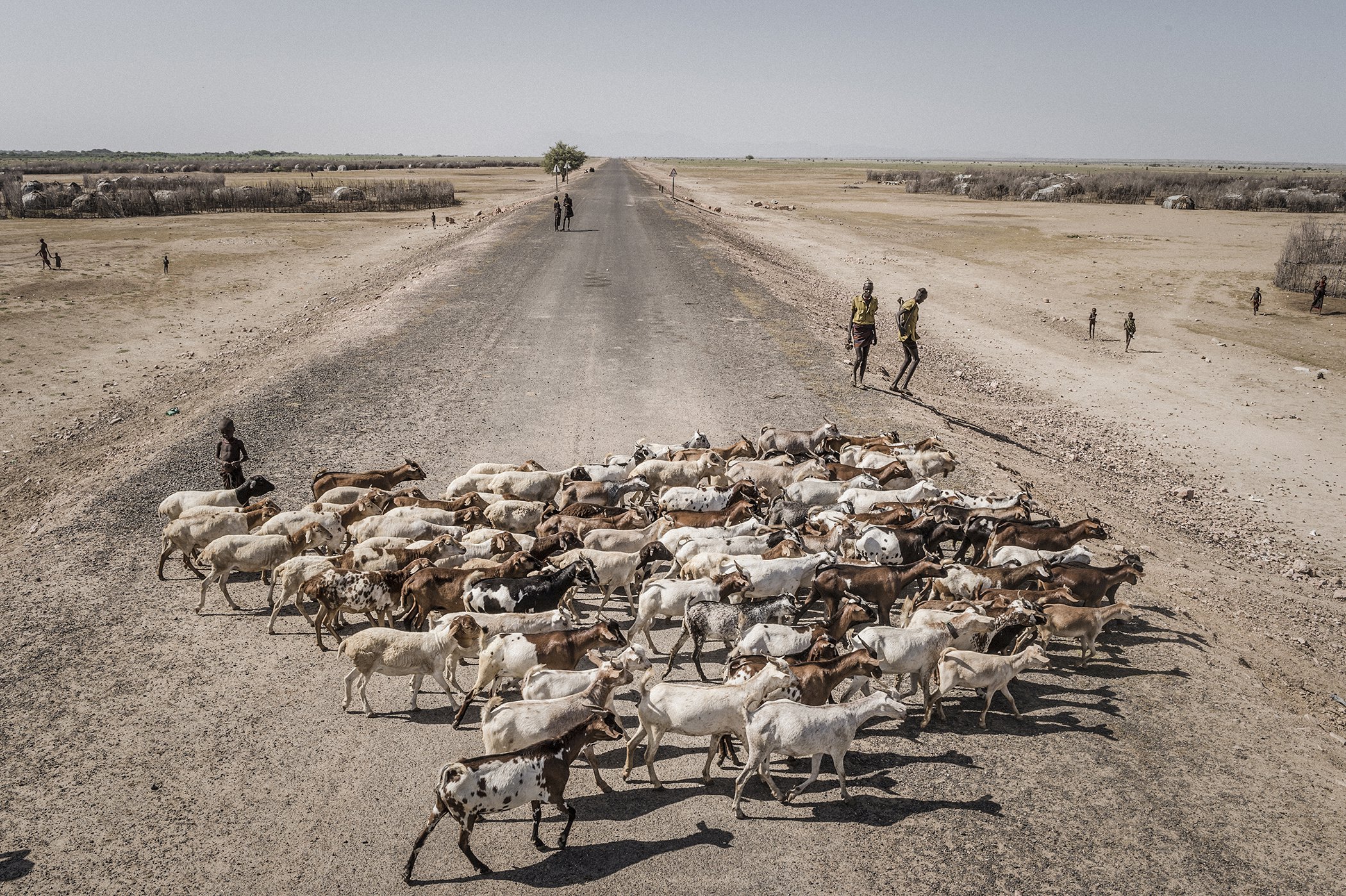 Omo Change: The Omo Valley in Ethiopia is undergoing rapid change due to the construction of the Gibe III Dam, which is causing severe environmental and socioeconomic impacts on the region. Nominated in the Long-term Projects category.
Image: © Fausto Podavini 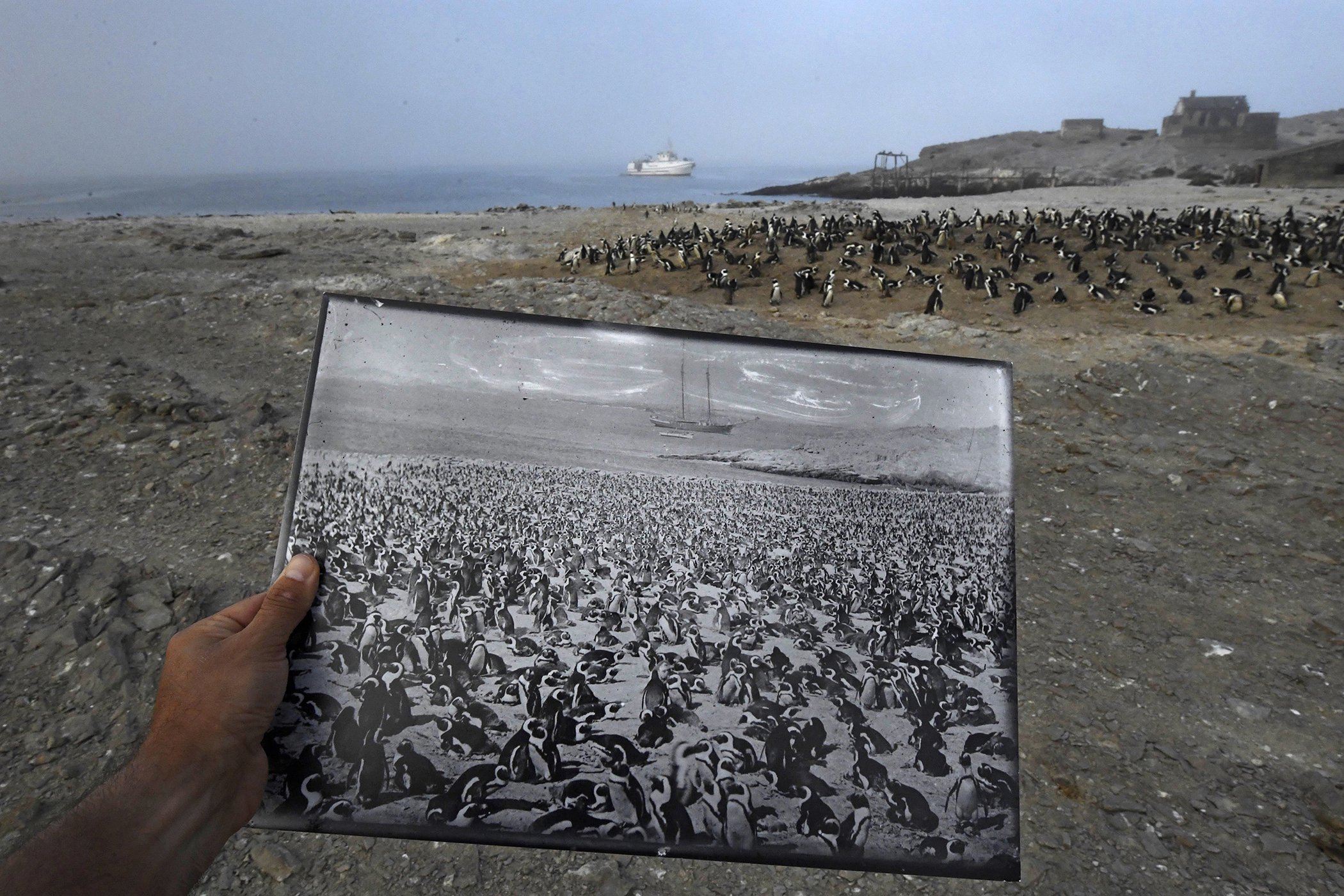 Back in Time: A photograph of a penguin colony from the late 1890s, in contrast to the declining numbers in 2017 at the same location, Halifax Island, Namibia. The colony once numbered over 100K penguins. Nominated in the Environmental Singles category.
Image: © Thomas P. Peschak 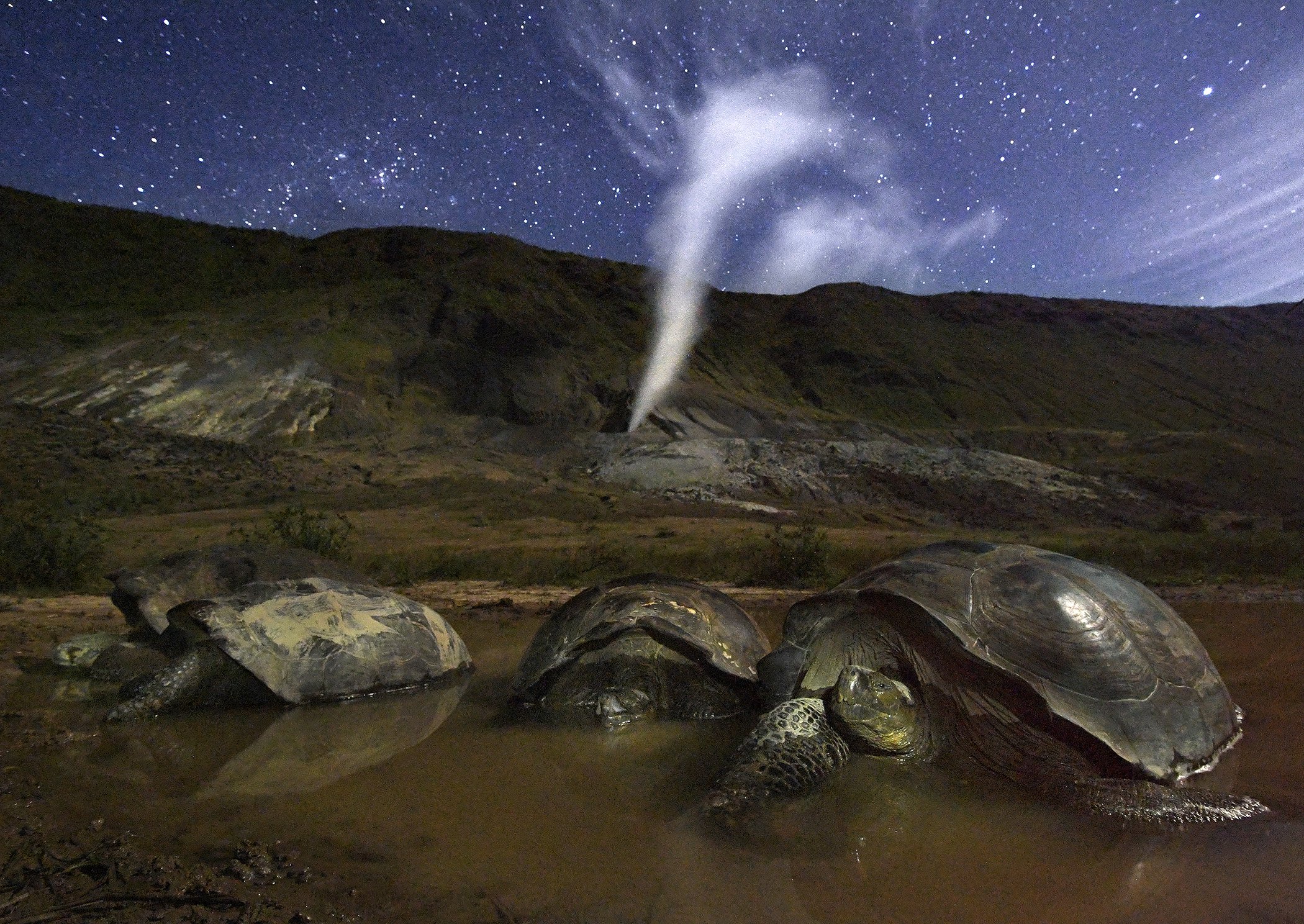 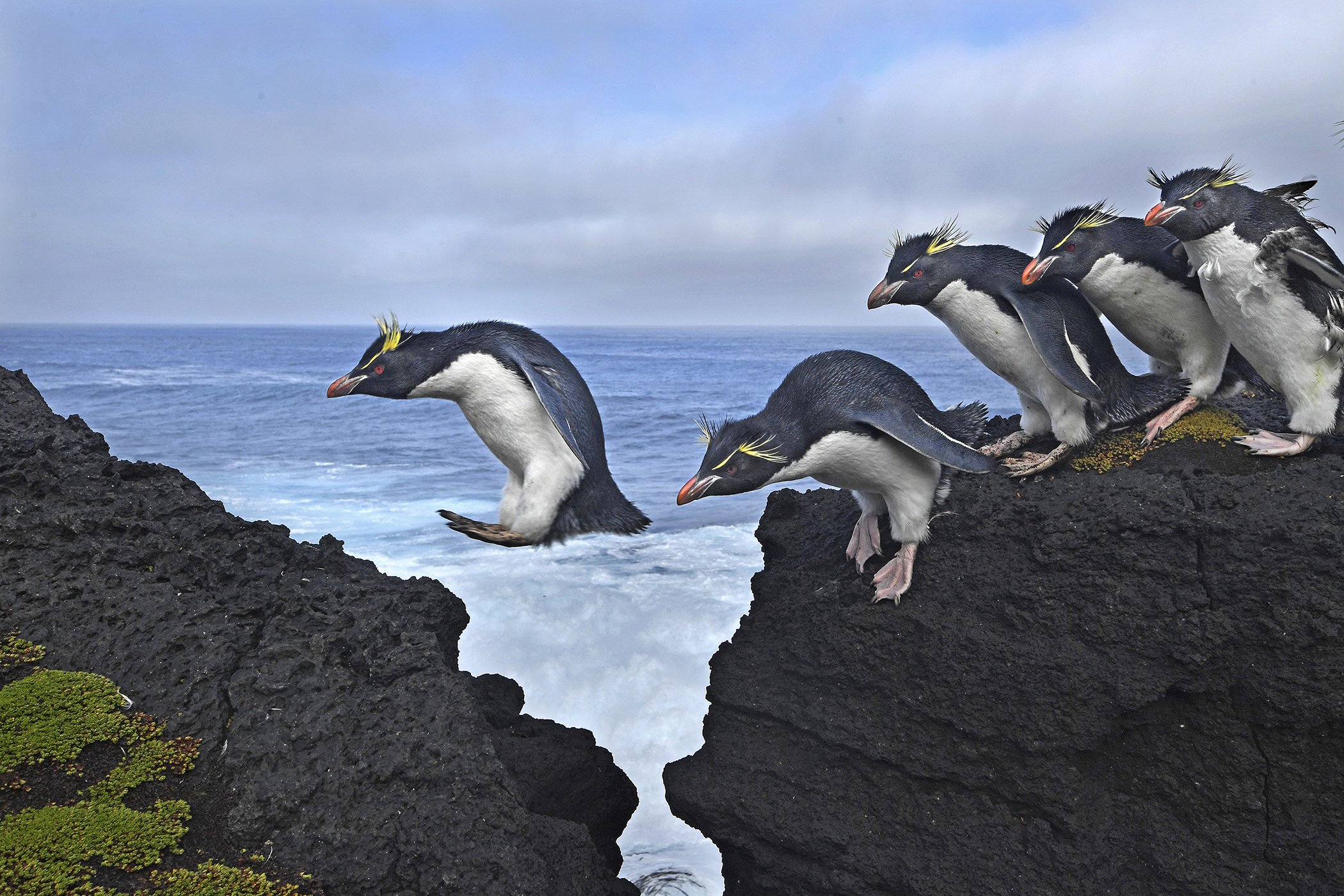 Jump: Rockhopper penguins live up to their name as they navigate the rugged coastline of Marion Island, a South African Antarctic Territory in the Indian Ocean. Nominated in the Nature Singles category.
Image: © Thomas P. Peschak