They want to know what's so offensive about breastfeeding.

Women demonstrators in Nairobi have marched on a restaurant that allegedly asked a breastfeeding mother to cover up or breastfeed in the bathroom. The women say restaurants and other facilities need to support mothers who choose to breastfeed in public spaces.

What is so offensive about breastfeeding that you would send a mother to the bathroom?

This was the question posed by women taking part in Tuesday's march from Nairobi's Freedom Corner to parliament, and then to Olive Restaurant in downtown Nairobi.

Take action: Call on World Leaders to Focus on Adolescent Girls and Improve Their Nutrition

It was at this restaurant that 26-year-old Beth Njeri said she was humiliated by a waitress for breastfeeding her baby.

It was early afternoon when Njeri stepped inside the restaurant with her 16-month-old daughter, Alyssa, and ordered some food. Njeri explained what happened.

"My baby did not settle. She was moving, she was trying to stand, she was disturbing and moving all around. I took her and started breastfeeding her, so that she can be calm because the order took some time. When I was still feeding her, a lady came and told me to cover up or stop breastfeeding. I stopped breastfeeding. I engaged her with some questions, if there was somewhere I could breastfeed, well, she rolled her head towards the washrooms," she said.

Njeri was angry and in her rage posted a description of the incident on her Facebook page. The post was picked up by members of other groups and quickly went viral, with mostly women jumping to her defense and even planning Tuesday's march. 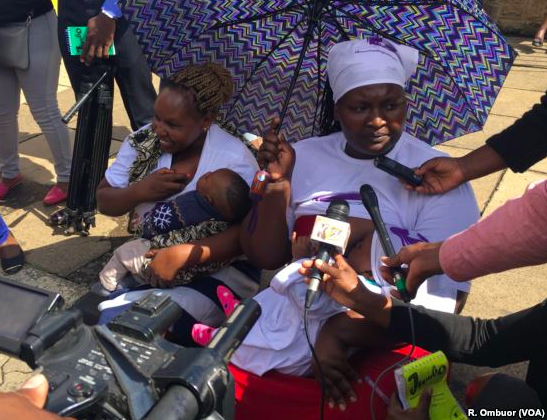 Njeri said that she was shocked by the response from her post, but was glad that the incident had sparked a national dialogue on breastfeeding.

"Women should breastfeed anywhere, even in public places, because you cannot choose where the baby will want to breastfeed. It is nature," she said.

Read more: This Canadian Mom Breastfeeding at Her Hockey Game Is the Best

Kenya's parliament is considering two bills that would mandate safe and convenient spaces for lactating mothers. Both would require employers to set aside special areas for breastfeeding mothers in the workplace.

Meanwhile, the eatery has issued an apology to Njeri via its Facebook page and appealed for calm while it deals with the matter.

This story was originally published here.