“Our rights—and our bodies—are not up for grabs.” 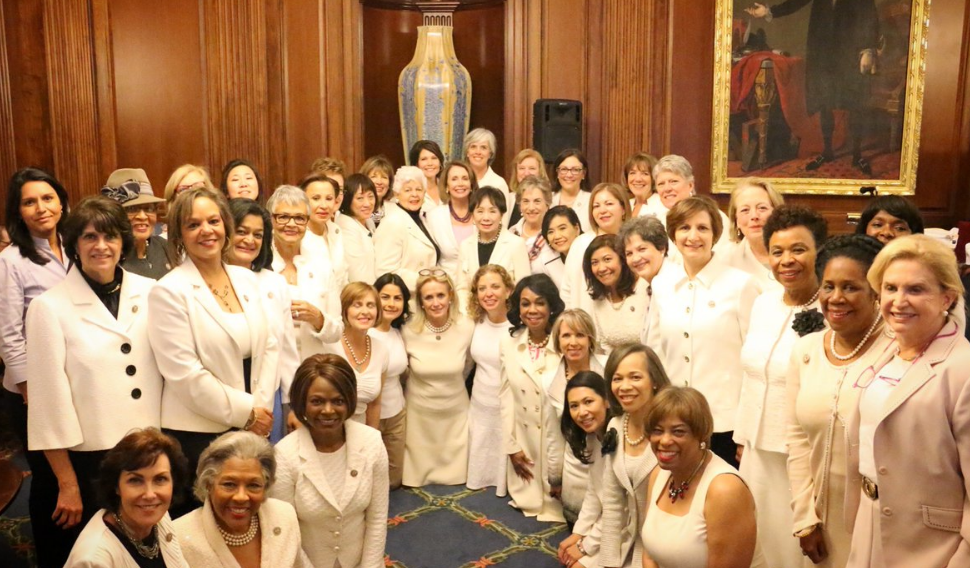 Many resolute statements were made Tuesday night during President Trump’s address to Congress, but none so bold as the mass of women wearing white among a sea of applauding figures. Many of the 66 Democratic women representatives and delegates who make up the House Democratic Women’s Working Group sported a “suffragist white” in support of women’s rights.

The move is reminiscent of last year’s election when Democrat Hillary Clinton — the first woman to be nominated for president of a major political party — wore white pantsuits during key campaign appearances, a nod to the women’s suffrage movement of the early 1900s. The movement encouraged its supporters and activists to dress in white as an emblem of purity, as a symbol of the quality of their purpose.

And the trend has gathered new momentum. During President Trump’s Inauguration, Clinton and both Ivanka and Tiffany Trump showed up clad in white.

On Election Day, some women went to the polls dressed in white — making viral the social media hashtag #WomenWearWhiteToVote.

#WearWhiteToVote in honor of our foremothers who fought, suffered, and even died to win the vote for women. pic.twitter.com/07ESXhZsAl

"We wear white to unite against any attempts by the Trump Administration to roll back the incredible progress women have made in the last century, and we will continue to support the advancement of all women," Rep. Lois Frankel, D-Fla., the chair of the party's Women's Working Group, said in a statement.

The members wore white to show their unwavering support for Planned Parenthood, affordable health care, reproductive rights, equal pay, paid leave, and affordable child care — issues that have been threatened or questioned by the Trump administration.

A few short days after his inauguration, with a broad stroke of his pen, President Trump reinstated the controversial “Global Gag Rule”, a policy that bars foreign aid and federal funding for family planning services and brings into question the future of women’s health care everywhere.

A few weeks later, he picked Neil Gorsuch for the Supreme Court, with an eye toward to getting a justice on the high court who would oppose abortion rights and fill the vacancy made by Judge Scalia’s sudden passing last year.

Rep. Barbara Lee of California posted on Facebook that she wore white “in honor of the generations of women who marched and fought for our sacred rights. President Trump needs to know that his sexist, chauvinistic, and predatory behavior is unacceptable and un-American. Our rights—and our bodies—are not up for grabs.”

This call to wear white hasn’t been the first sign of opposition to the Trump agenda and certainly will not be the last.