South Africans queue in the early morning cold to cast their votes in the mining settlement of Bekkersdal, west of Johannesburg, in South Africa, May 8, 2019.
Ben Curtis/AP
NewsCitizenship

Through protests and voting, people around the world exercised their democratic rights this week.

Why Global Citizens Should Care
From disastrous weather events to political crises, communities have united to show resilience and commitment to support global goals. You can join the movement by taking action here.

Secretary of State Mike Pompeo hinted at a possible US military intervention if the situation does not improve. “If that's what's required, that's what the United States will do,” he said.

In South African, citizens voted on Wednesday in the country's 25th national election since the end of apartheid. President Cyril Ramaphosa's ruling African National Congress is primarily facing opposition from two parties — the Democratic Alliance and Economic Freedom Fighters. The Independent Electoral Commission (IEC) reported that 27 million people have registered to vote and that 31% of voters are under the age of 31.

The issues at core of the election are the high costs of tertiary education, inadequate and unsafe sanitation, and the youth unemployment rate, which is reported to be the highest in the world.

India is also in the midst of elections. The country entered the fifth stage of its phased elections. Some studies suggest that women’s turnout may be higher than men’s in 2019, which could be a step for women's political participation in India. More than 99 million people are registered to vote in the country’s election — the largest democratic exercise in the world.

In the midst of the election, India also saw disaster, with Cyclone Fani in Odhisa, India, killing 29. In Paraguay, people were devastated by flooding that forced 40,000 people to evacuate their homes.

But this week gave the world several reasons to celebrate as well.

Britain’s Prince Harry and Meghan Markle, Duchess of Sussex, welcomed a baby boy named Archie Harrison Mountbatten-Windsor. The baby is seventh in line to the British throne, after his father.

And muslims around the world began celebrating Ramadan. Throughout the month they will fast from sunrise to sunset and abstain from eating, drinking, smoking, and sex — the religious occasion is a period of introspection, during which people attend communal prayers, give to charity, and perform the Hajj, a holy pilgrimage to Mecca.

These are 13 of this week’s most inspiring photos. 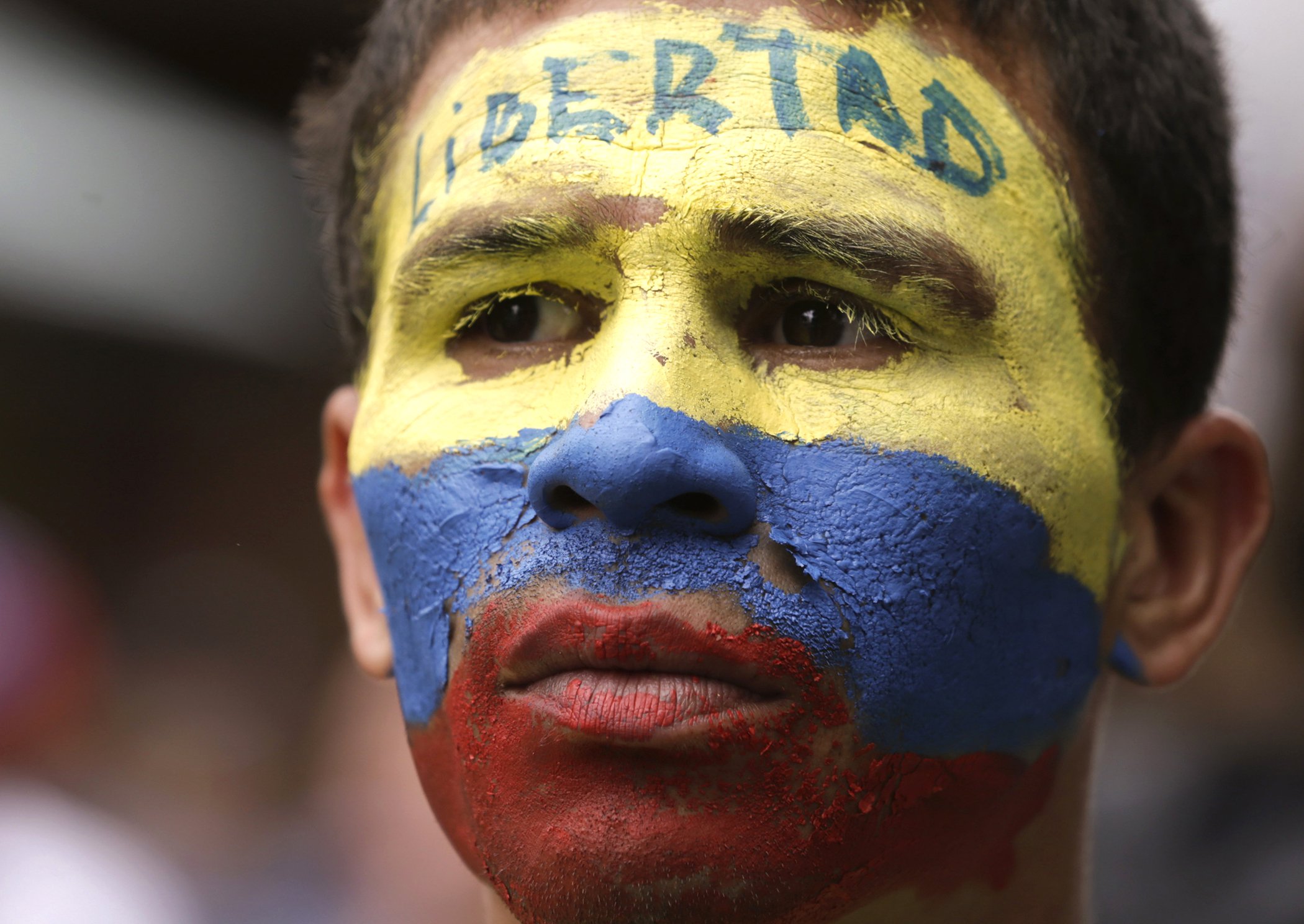 1. Political Crisis in Venezuela: A protester, with his face painted in the colors of the Venezuelan national flag and the Spanish word for "Freedom" written on his forehead, takes part in a march against Venezuela's President Nicolas Maduro in Caracas, Venezuela, on May 4, 2019. Opposition leader Juan Guaido took his quest to win over Venezuela's troops back to the streets, calling his supporters to participate in outreach to soldiers outside military installations across the country. Amid this geopolitical turmoil, the country’s humanitarian crisis, which began nearly a decade ago, continues to deteriorate. The crisis in Venezuela has steadily grown over the past few years following the collapse of the country’s economy, widespread food insecurity, a faltering health care system, and violence. 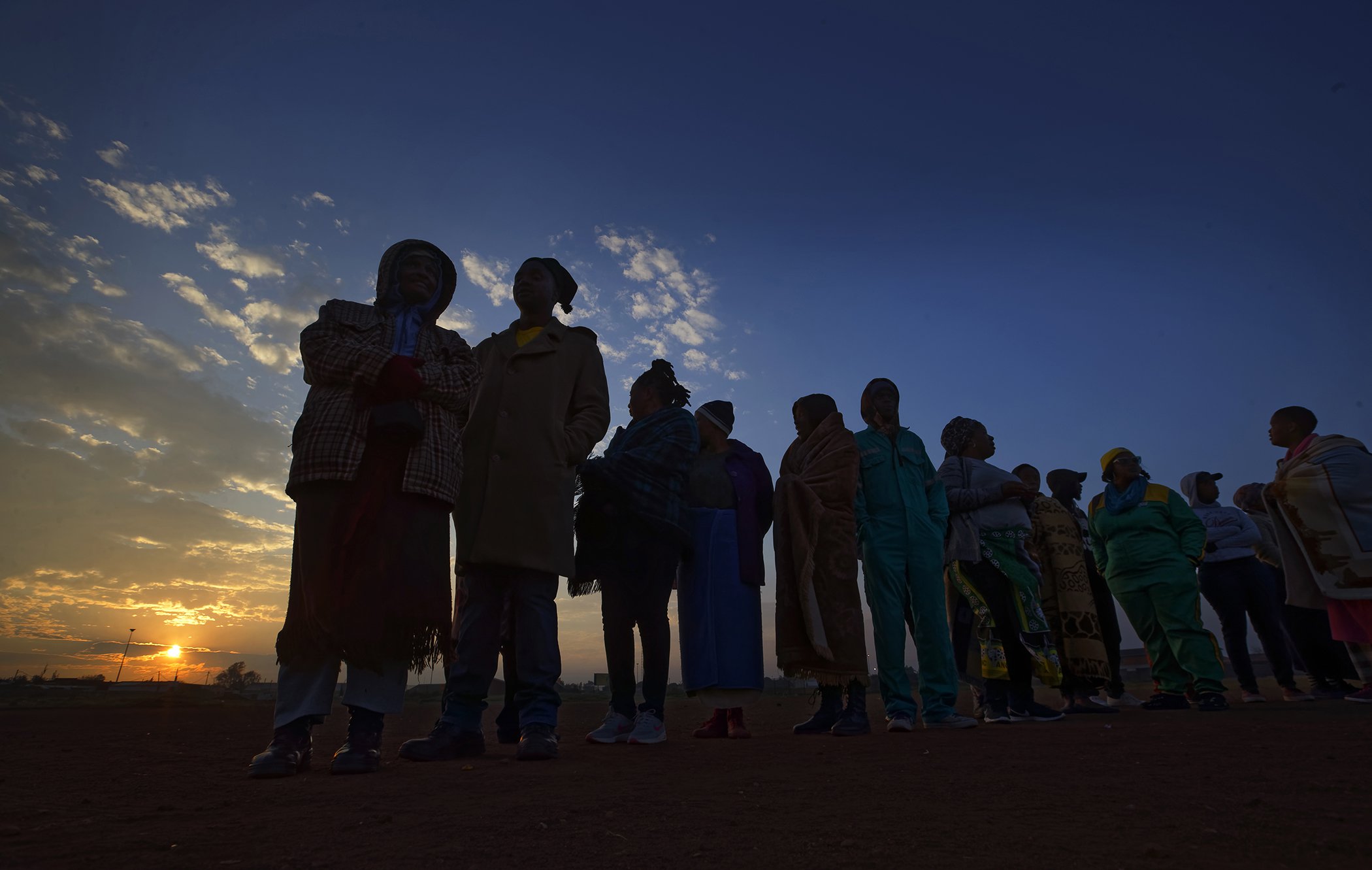 2. Elections in South Africa: South Africans queue in the early morning cold to cast their votes in the mining settlement of Bekkersdal, west of Johannesburg, in South Africa, on May 8, 2019. South Africans voted on Wednesday in a national election where President Cyril Ramaphosa's ruling African National Congress was tested against top opposition parties Democratic Alliance and Economic Freedom Fighters, 25 years after the end of apartheid. The Independent Electoral Commission (IEC) reports that 27 million people have registered to vote and that 31% of voters are under the age of 31. Some of the most critical issues that the country has faced since its last elections in 2014 have affected young people the most. These include the high cost of tertiary education, lack of adequate and safe sanitation, and a youth unemployment rate that’s reported to be the highest in the world. 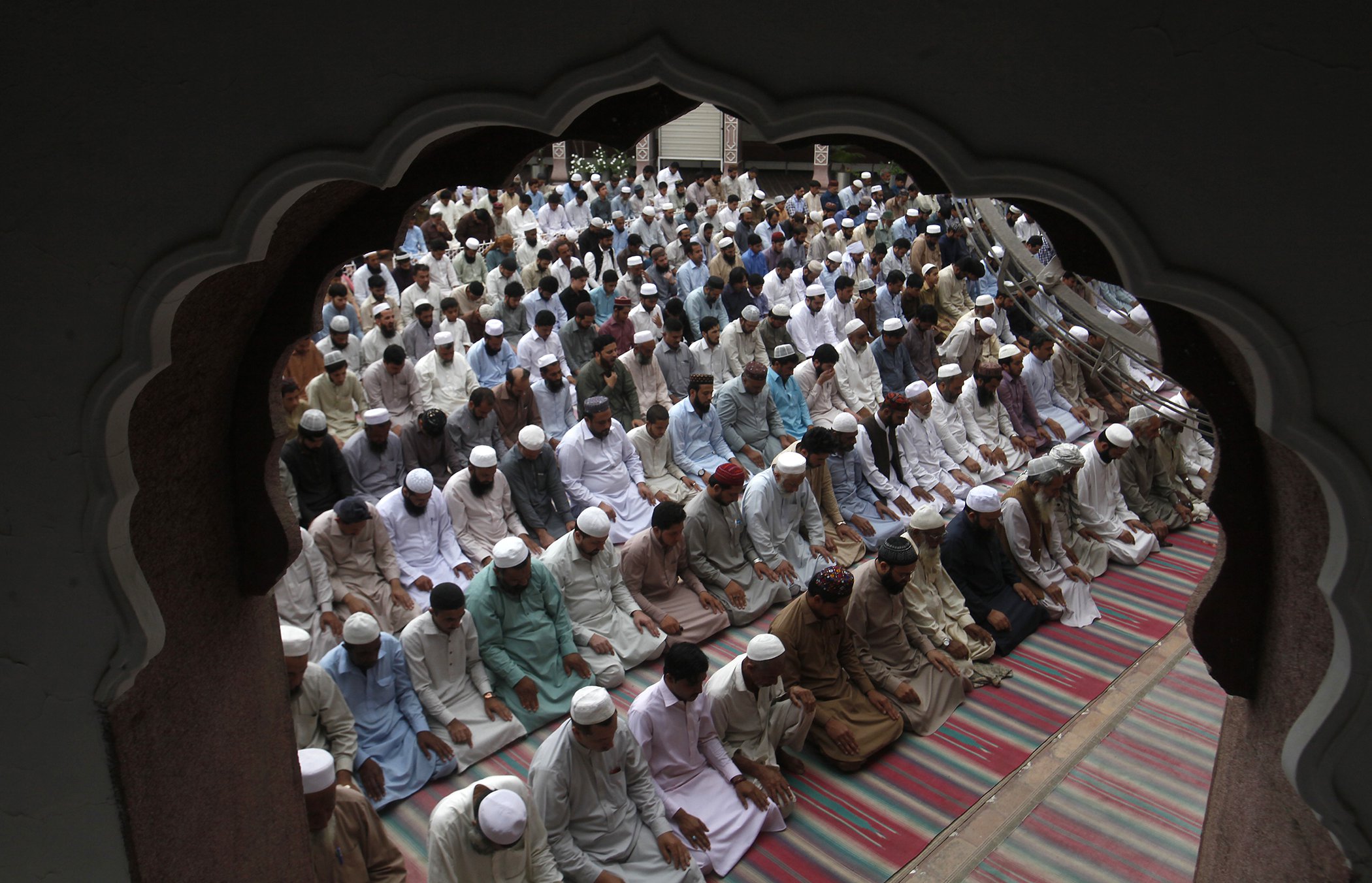 3. Ramadan: Muslims perform an evening prayer called "tarawih" during the fasting month of Ramadan at a mosque in Peshawar, Pakistan, on May 6, 2019. Muslims throughout the world are observing Ramadan, the holiest month in the Islamic calendar, refraining from eating, drinking, smoking, and sex from sunrise to sunset. 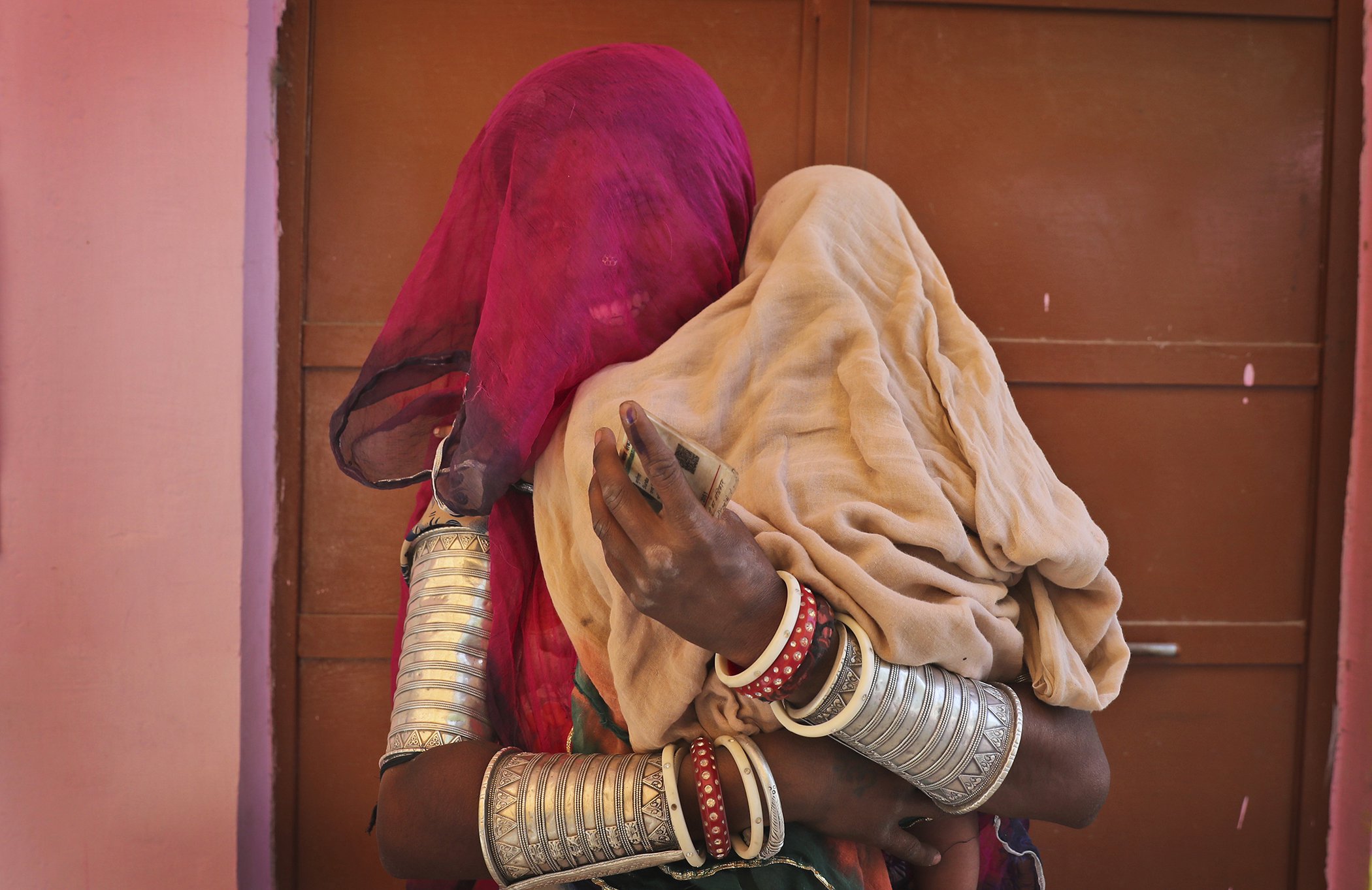 4. Elections in India: An Indian woman holds her child after casting her vote as she waits for others at a polling station in Neemrana, in the northern Indian state of Rajasthan, May 6, 2019. Polls opened Monday for the crucial fifth phase of India's marathon elections, including in two constituencies in the vote-rich state of Uttar Pradesh, where opposition Congress party president Rahul Gandhi and his mother Sonia Gandhi hope to retain their seats. The election, the world's largest democratic exercise, is seen as a referendum on Prime Minister Narendra Modi and his Bharatiya Janata Party. The scale of the general elections in India is the largest in the world, with more than 1 million polling booths being set up all over the country, according to Vox. The process ends on May 19.

5. Political Protest in Turkey: Supporters of Istanbul Mayor Ekrem Imamoglu react as they wait for him during a protest against the re-run of Istanbul's mayoral election on May 6, 2019. Turkey's top election body ordered a re-run of the Istanbul mayoral election after President Recep Tayyip Erdogan's party complained about its shock defeat in the vote, the state news agency reported. The ruling Justice and Development Party (AKP) narrowly lost Turkey's biggest city in March 31 local elections, ending the party and its predecessors' 25-year control of the metropolis. The new election will take place on June 23, according to the state-run TRT broadcaster. The AKP claims there were "irregularities and corruption" that required a re-run of the mayoral election, which was won by Ekrem Imamoglu, of the main opposition Republican People's Party (CHP) by just 13,000 votes.

6. Ramadan Around the World: Muslim people pray on the first night of the holy month of Ramadan at the Istiqlal Grand Mosque in Jakarta, Indonesia, on May 5, 2019. Ramadan in Indonesia begins on May 6, with devotees fasting from dawn to dusk until Eid celebrations marking the end of the holy month. 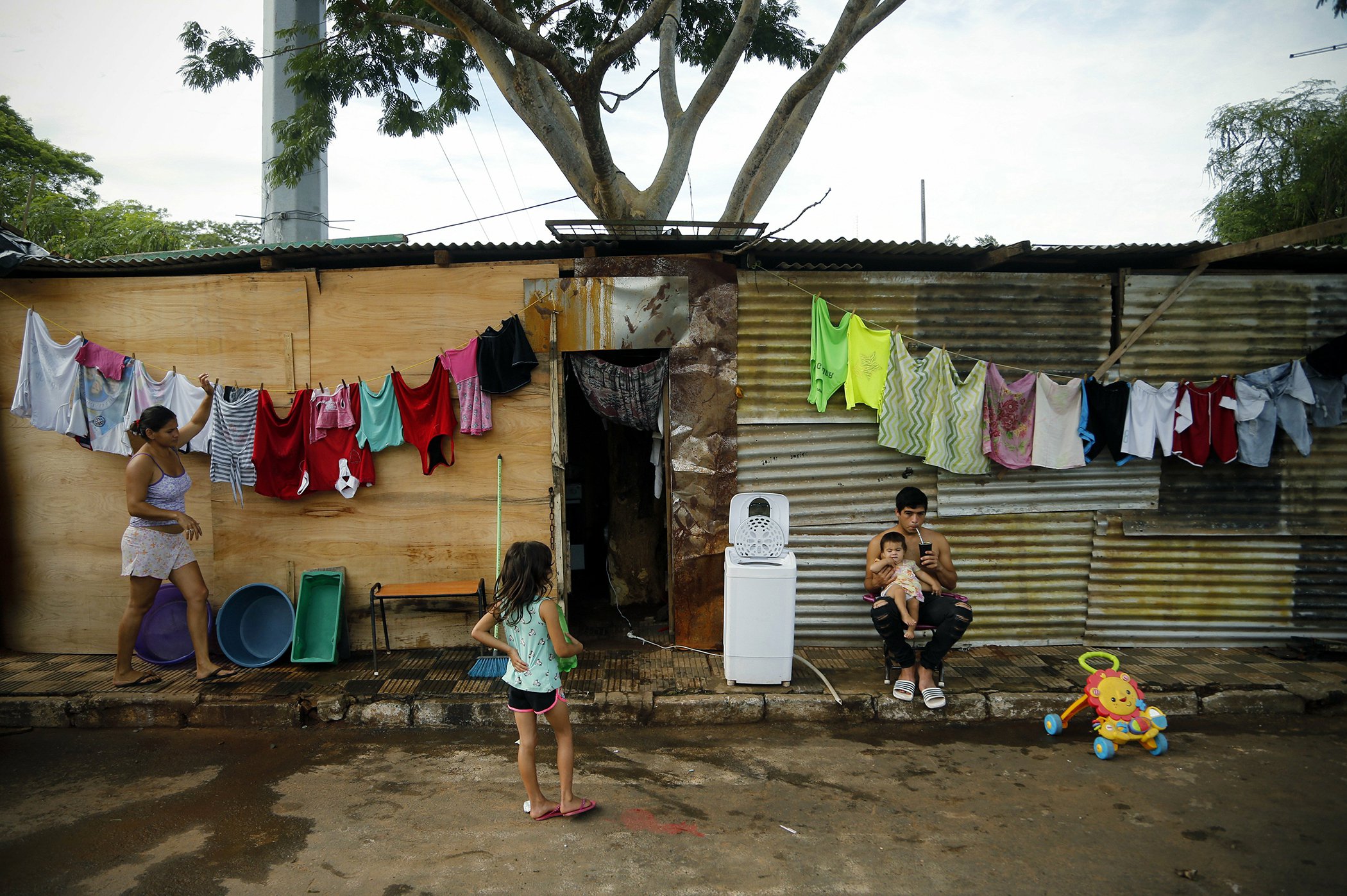 7. Flooding in Paraguay: Cristaldo family members, displaced by floods, wash their clothes at a shelter entrance in Asuncion, Paraguay, May 8, 2019. About 40,000 Paraguayans have been forced to evacuate their homes in recent weeks due to rising waters. Officials say that more than 11,000 of the evacuees live in the capital of Asuncion.

8. Cyclone Fani: People stand near a damaged home after Cyclone Fani passed through Puri, Odisha, India, on May 4, 2019. A Category 4 storm with strong wind and heavy rain caused havoc in India's eastern parts on Friday, prompting authorities in the country and neighboring Bangladesh to evacuate more than 3.5 million people to shelters.

9. California Climate Report: A housing development stands in the desert in the Coachella Valley on May 6, 2019 in Palm Springs, California. California's Fourth Climate Change Assessment found that temperatures of the inland deserts of southern California, including the Coachella Valley, are expected to continue climbing. According to the report, average daily highs could increase as much as 14 degrees this century if greenhouse gas emissions keep rising. 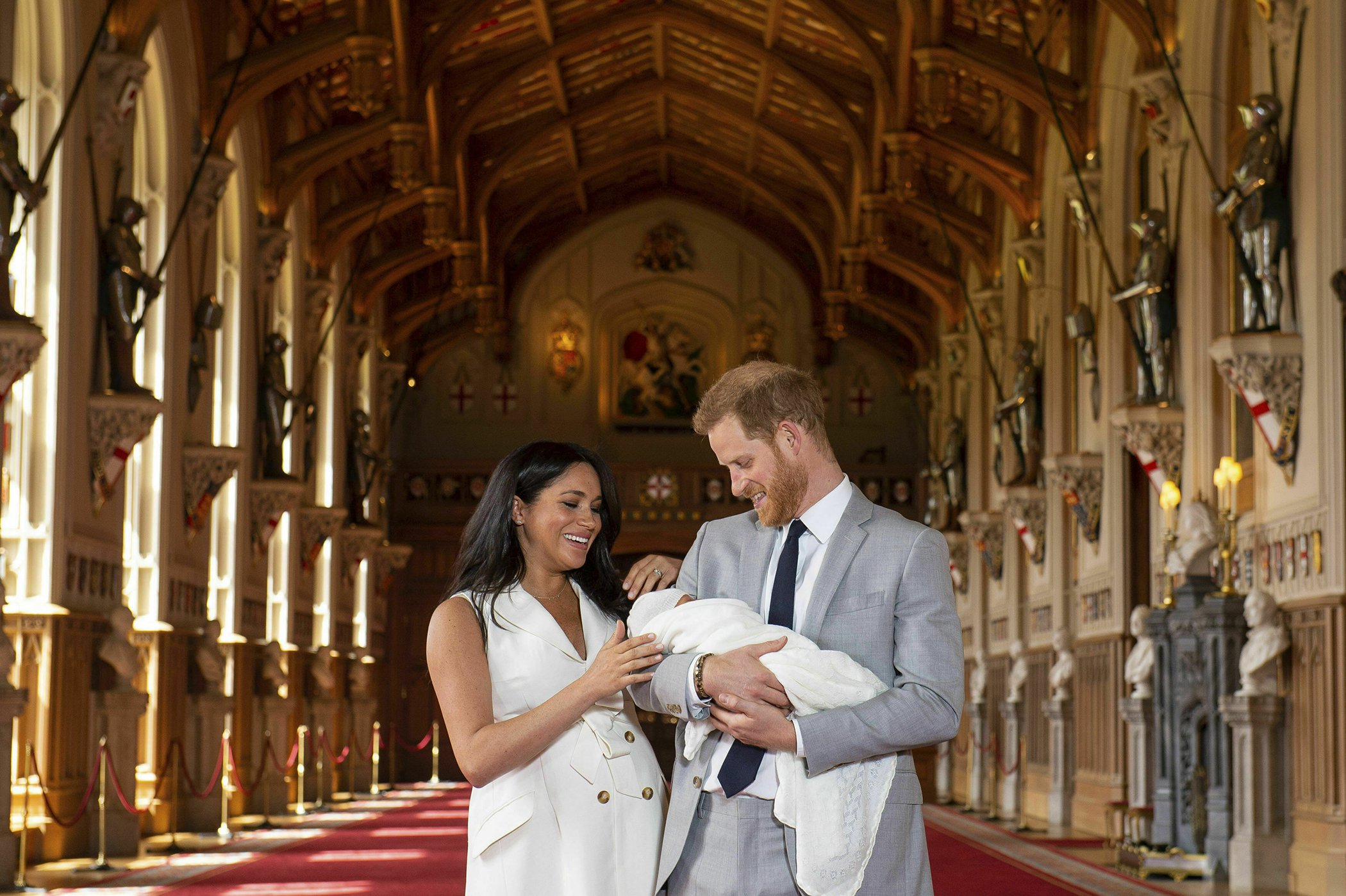 Britain's Prince Harry and Meghan, Duchess of Sussex, during a photocall with their newborn son, in St George's Hall at Windsor Castle, Windsor, south England May 8, 2019.
Image: Dominic Lipinski/Pool/AP

10. Baby Sussex: Britain's Prince Harry and Meghan, Duchess of Sussex, during a photocall with their newborn son in St George's Hall at Windsor Castle, Windsor, south England May 8, 2019. The royal baby, Archie Harrison Mountbatten-Windsor, is now seventh in line to the British throne. 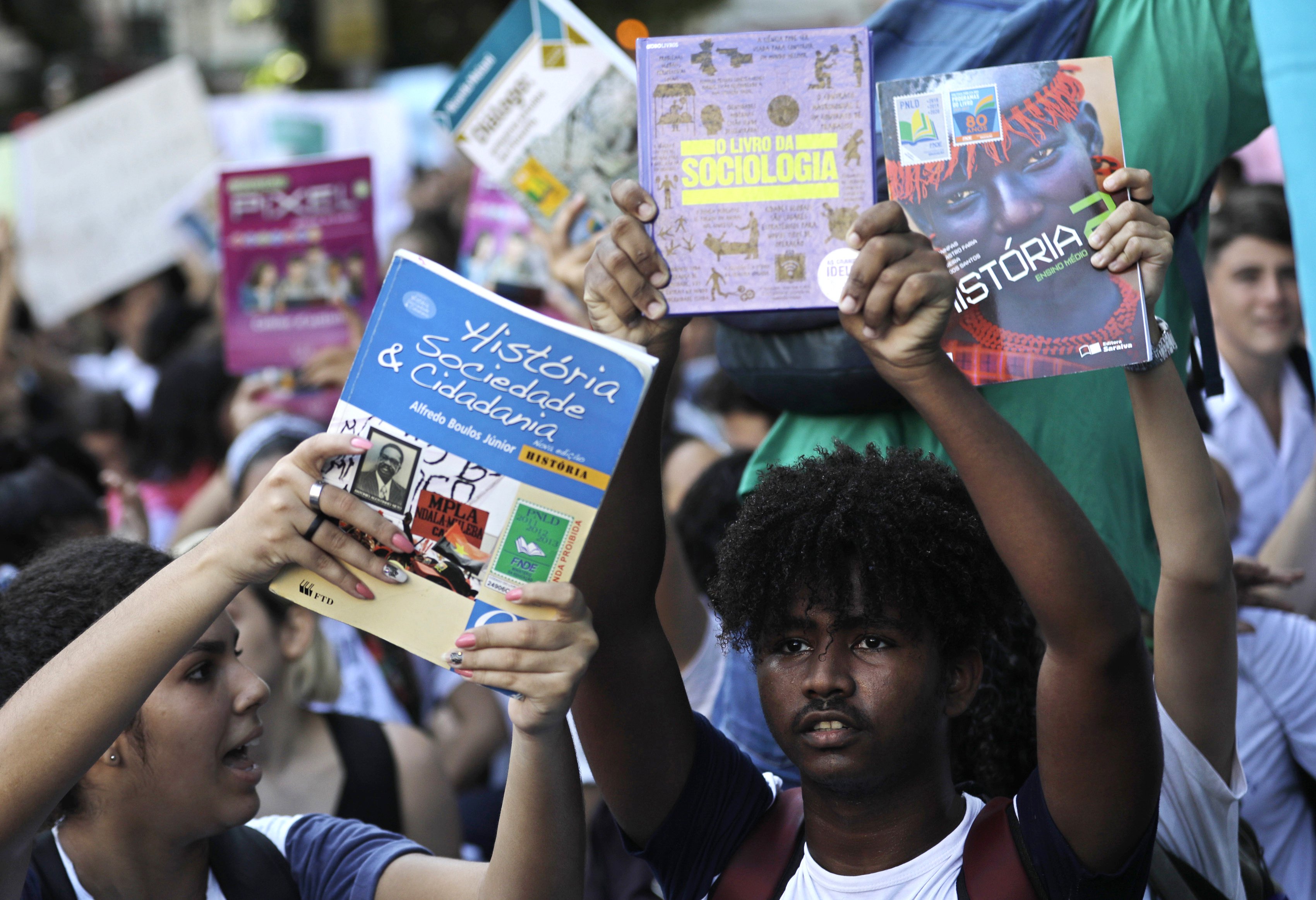 Public school students hold up history and sociology books during a protest against budget cuts in education outside the military school where Brazil's President Jair Bolsonaro attends a ceremony in Rio de Janeiro, Brazil, May 6, 2019.
Image: Silvia Izquierdo/AP

11. Student Protests in Brazil: Public school students hold up history and sociology books during a protest against budget cuts in education outside the military school where Brazil's President Jair Bolsonaro is attending a ceremony in Rio de Janeiro, Brazil, May 6, 2019. Students are protesting sudden budget cuts for federally funded public high schools and universities, as well as the government's proposal to withdraw philosophy and sociology from public universities.

12. South Africa: Residents of a former hostel complex observe voters queuing at a polling station during South Africa's national and provincial elections in the Kwamashu township, in the outskirts of Durban on May 8, 2019. South Africans began voting on Wednesday in national elections in which the ruling ANC, in power since 1994, is favorite to win despite corruption scandals, sluggish economic growth, and record unemployment. The ANC has won all the past five elections, but the vote was set to be an electoral test on whether the party has staunched a decline in popularity.

13. Breaking Fast During Ramadan: A Palestinian family break their fast next to their house, which was destroyed in a recent confrontation between Hamas and Israel, in Rafah on the southern Gaza Strip on May 8, 2019, during the Muslim holy fasting month of Ramadan. Palestinian leaders in Gaza agreed to a ceasefire with Israel on May 6 to end a deadly two-day escalation in violence that threatened to widen into a fourth war between them since 2008.

TopicsCitizenshipPhotographyWeek in Pictures
South Africans queue in the early morning cold to cast their votes in the mining settlement of Bekkersdal, west of Johannesburg, in South Africa, May 8, 2019.
Ben Curtis/AP