Why Global Citizens Should Care
From calls for equal pay to combating plastic pollution in the ocean, these striking images from around the world this week highlight the growing need to support the UN Global Goals, including gender equality and climate action. You can join us by taking action here to tackle these issues and help reduce inequality and fight climate change.

The US women's national soccer team made history by winning their fourth FIFA Women's World Cup — their second consecutive win — on Sunday, July 7. After the final match ended, the crowd at the French stadium Stade de Lyon began chanting “equal pay," supporting the athletes' calls for reduced inequality in sports.

In 2015, 28 members of the women’s national team, including this year’s co-captains Megan Rapinoe and Alex Morgan, filed a lawsuit against the US Soccer Federation alleging gender discrimination. Despite the fact that US women’s soccer games have generated more annual revenue and profit than the US men’s games since 2016, female athletes are paid much less than their male counterparts — in some cases, the women make only 38% of what male athletes earn per game.

But gender equality wasn't the only issue in the news this week.

The global movement called “Plastic Free July” to raise awareness about the damage caused by single-use plastics has begun and will continue through the month. As part of the movement, Greenpeace installed a temporary structure of whale sculptures made of ocean plastic in front of the parliament building in Budapest, Hungary. And in China, a different kind of environmental concern emerged as heavy rainfalls caused flooding in Hengyang in central China's Hunan province.

In the US, the House Oversight and Reform Committee held a hearing on July 12 to discuss the treatment of migrants at the southern US border, amid reports of unsanitary and poor conditions in detention centers.

"When these women tell me that they were put into a cell and that their sink was not working, and we tested the sink ourselves, and the sink was not working. And they were told to drink out of a toilet bowl. I believe them. I believe these women," Rep. Alexandria Ocasio-Cortez, who recently visited a border facility in Clint, Texas, said at the hearing.

Lawyers, politicians, and activists have argued that people including children and infants are being held with inadequate food, water, and sanitation at the detention centers, and are calling for action. But even as reports of poor treatment at the centers emerges, migrants fleeing violence and extreme poverty continue to arrive at the US-Mexico border, seeking safety and opportunity.

These are the most powerful images from around the world this week. 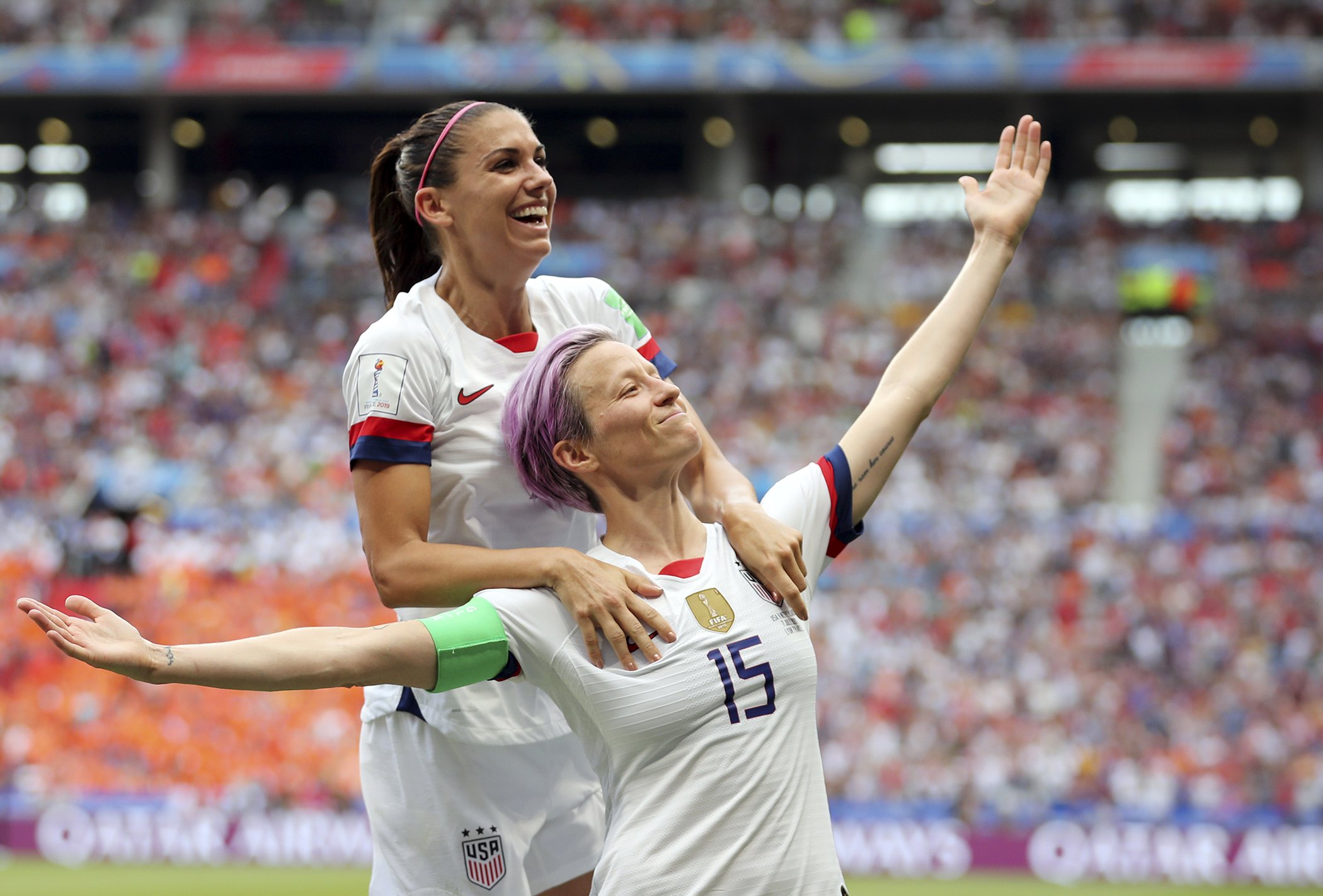 1. Women's World Cup: United States players Megan Rapinoe, right, and Alex Morgan, left, celebrate after scoring the opening goal from the penalty spot during the Women's World Cup final soccer match between US and the Netherlands at the Stade de Lyon in Decines, outside Lyon, France, on July 7, 2019. The US women’s national soccer team took home their fourth FIFA Women’s World Cup on Sunday and as the players were crowned champions, the crowd met them not with predictable cheers and applause, but fervent calls for the women to receive “equal pay!” The crowd’s powerful chant was a poignant reminder that even as celebrated champions, female athletes are still not treated as equals in their industry. The team was led to victory by co-captains Megan Rapinoe and Alex Morgan, who, together with 26 other members of the 2015 women’s national team, filed a lawsuit against the US Soccer Federation alleging gender discrimination in March. Despite the fact that the revenue from US women’s soccer games has exceeded that generated by US men’s games since 2016, the female athletes have been paid much less than their male counterparts. In some cases, female players were paid just 38% of what their male peers earned per game. The US team was already favored to win the competition, yet the team played as if they had everything to lose. And, in light of the ongoing battle for equal pay, another championship win meant they had everything to gain. 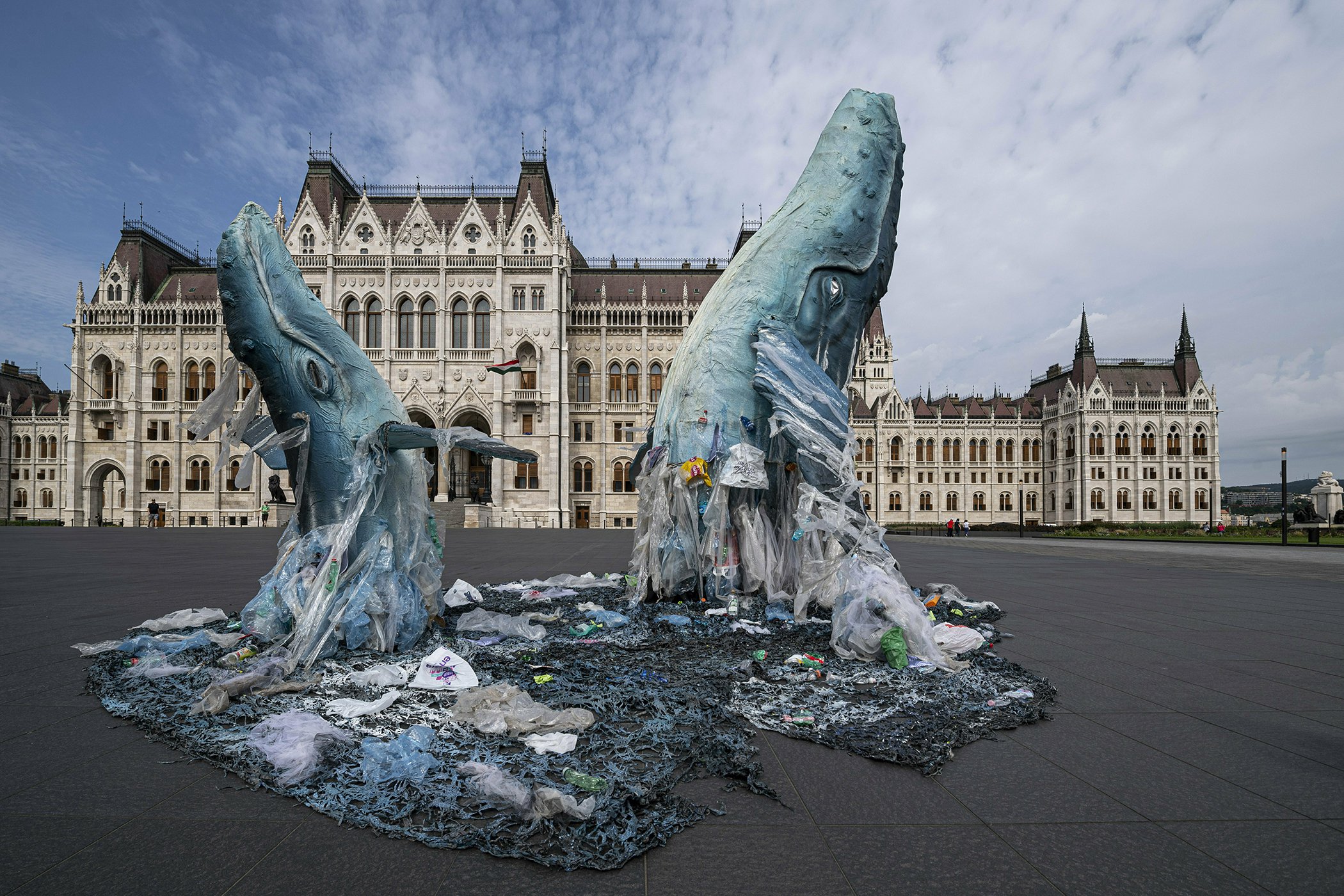 2. Plastic Pollution Awareness: Whale sculptures made from plastic waste that was recovered from the ocean are on display at the parliament building in Budapest, Hungary, on July 9, 2019. The temporary installation was erected by Greenpeace as part of the international environmental movement "Plastic Free July" to protest against polluting the world's oceans with plastic.

3. US Immigration: A man who is part of a group of asylum seekers, mostly from African countries, checks his phone as he waits for a negotiation commission to stage a walk-out in protest at the El Chaparral port of entry in Tijuana, Baja California state, northwestern Mexico, on July 9, 2019.

4. Hong Kong Protests: Demonstrators hold umbrellas on Nathan Road during a protest in the Mong Kok district of Hong Kong, China, on July 7, 2019. Thousands of demonstrators chanting slogans marched through one of Hong Kong's busiest tourist districts, the latest demonstration in a mass protest movement triggered by a proposed law that would allow extraditions of criminals to mainland China for the first time. 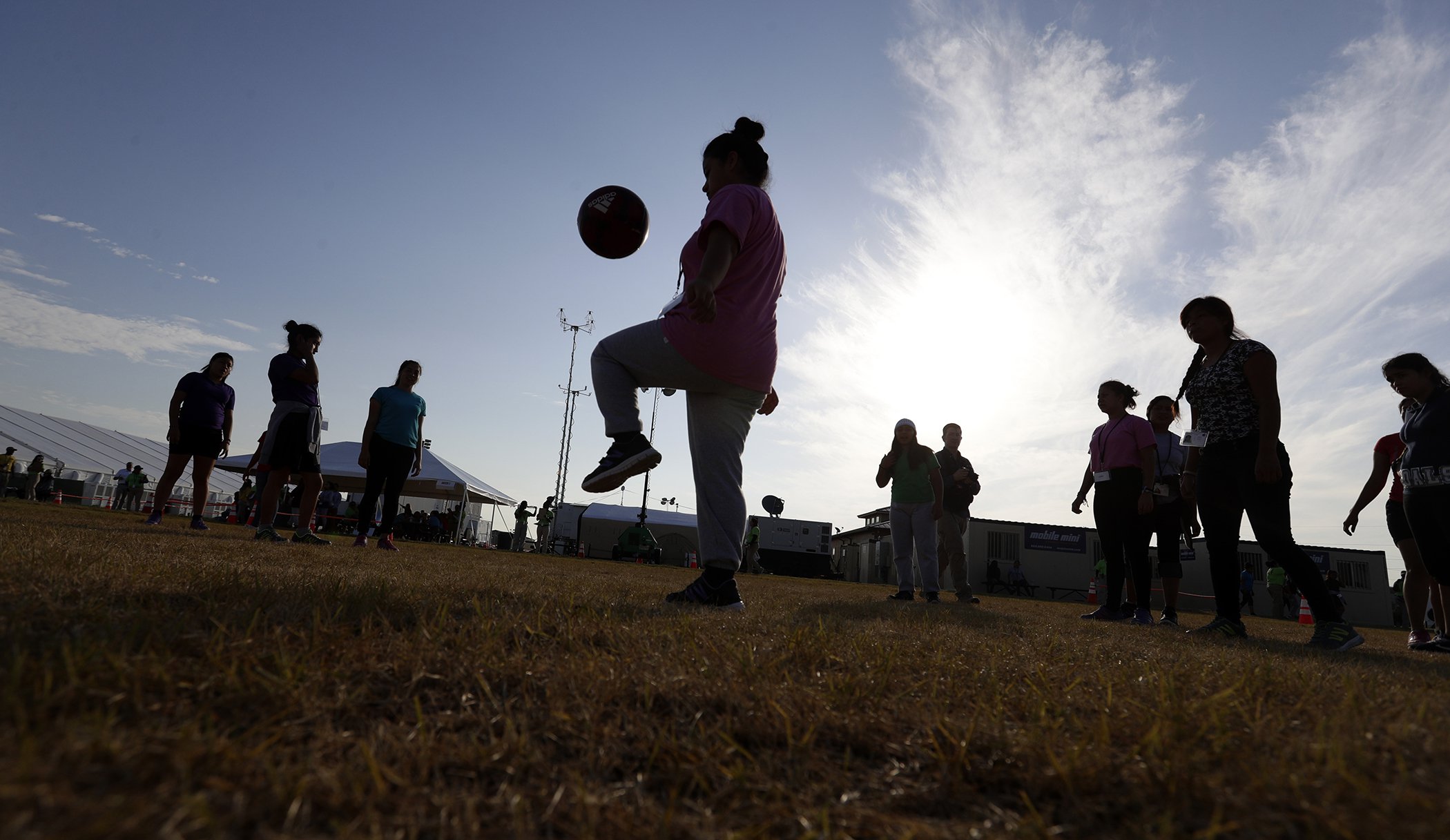 5. US Immigration Detention Centers: Immigrants play soccer at the US government's newest holding center for migrant children in Carrizo Springs, Texas, on July 9, 2019. The Department of Health and Human Services, which holds immigrant children unaccompanied by a parent under federal law, says about 225 children are currently held at the former camp for oil field workers. According to Associated Press, the holding center in Carrizo will be able to take in more children from the Border Patrol and keep them out of other facilities such as the one in Clint, Texas, where lawyers reported that kids were being held with inadequate food, water, and sanitation. This week, United Nations High Commissioner for Human Rights Michele Bachelet sharply criticized the conditions at migrant detention camps along the United States southern border. Bachelet said that the camps fail to meet basic human rights standards and urged the United States government to begin addressing many of the concerns raised by activists, journalists, and lawmakers. “As a pediatrician, but also as a mother and a former head of state, I am deeply shocked that children are forced to sleep on the floor in overcrowded facilities, without access to adequate health care or food, and with poor sanitation conditions,” she said. Conditions at detention camps vary, but in the worst cases, children and adults have been packed into freezing cold and squalid rooms without enough space to lie down, where they’re often denied access to soap, toothbrushes, water, and food. 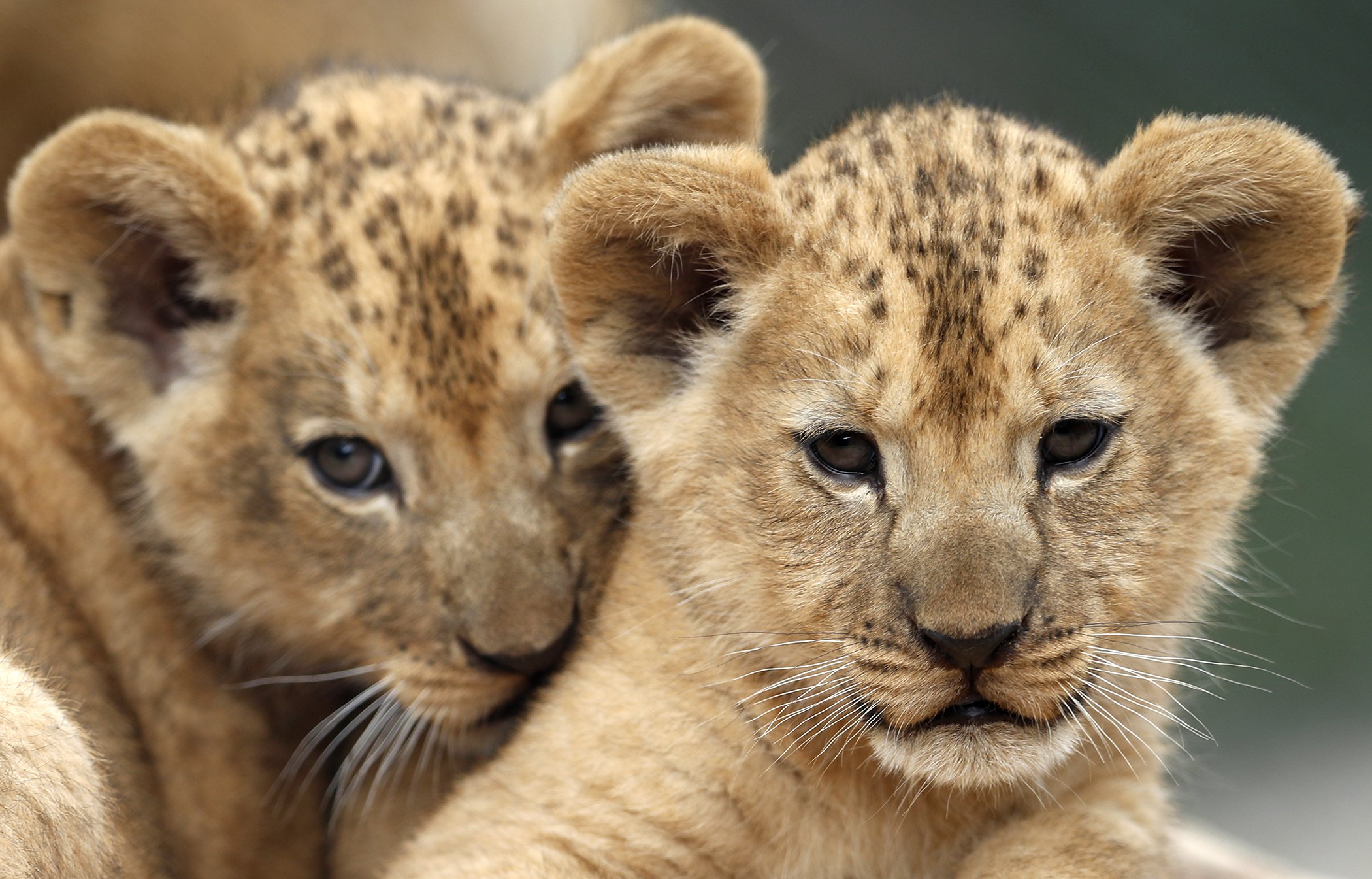 6. Rare Lion Cubs: Two Barbary lion cubs rest in their enclosure at the zoo in Dvur Kralove, Czech Republic, on July 8, 2019. The cubs were born in the zoo and are a welcome addition to a small surviving population of the rare majestic lion subspecies that is extinct in the wild. A male and a female that have yet to be named were born on May 10 in the Dvur Kralove safari park. According to the Associated Press, Barbary lions, the biggest lion subspecies, once roamed its native northern Africa, but were completely wiped out due to human activities and are believed to have gone extinct in the wild in the 1960s. 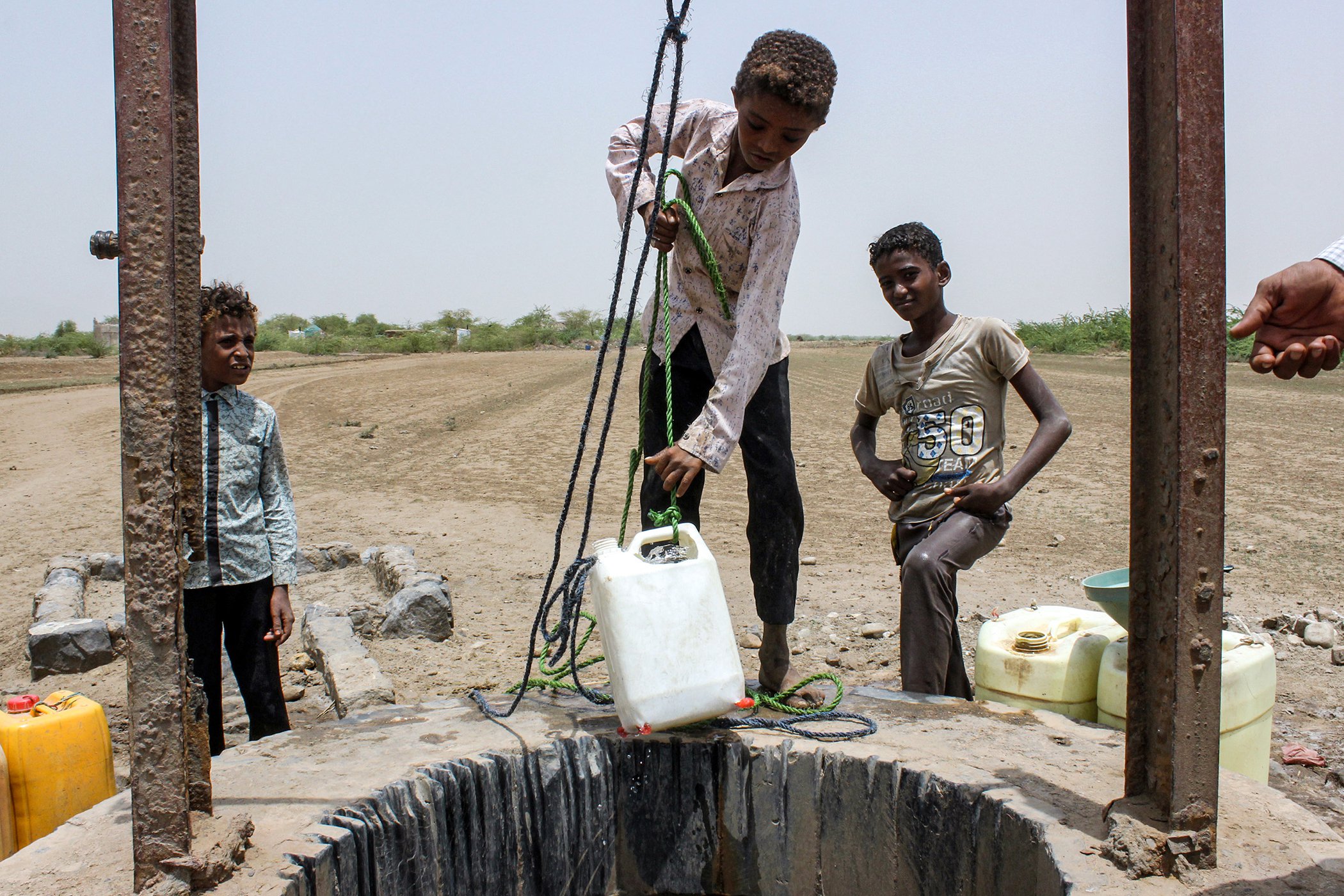 7. Yemen: Boys displaced from the eastern Yemeni district of Durahemi draw water from a well into jerry cans near the Red Sea port city of Hodeida on July 9, 2019.

8. Pride in Spain: A member of the LGBTQ+ community holds an umbrella decorated with the colors of the rainbow flag during the annual Pride march in Madrid on July 6, 2019.

10. Frida Kahlo Art: Irish urban artist Fin Dac (right) and his assistant work on his mural Magdalena, in honor of Mexican painter Magdalena Carmen Frida Kahlo in the month of her birth, in Guadalajara, Jalisco state, Mexico, on July 9, 2019.