Jax, 5, wanted to get the same haircut as best friend Reddy so his teacher couldn’t tell them apart. 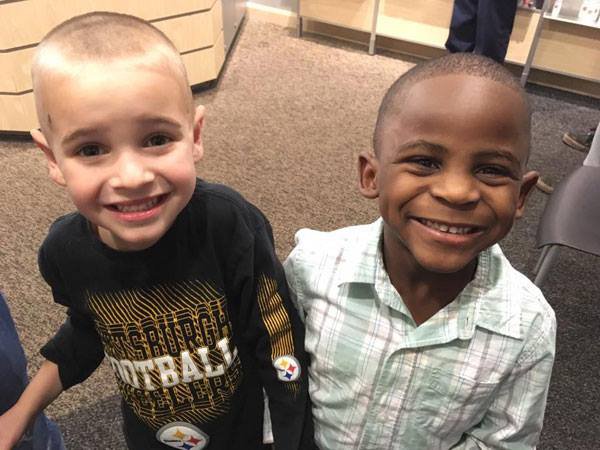 The news can be hard to read. Every day, there’s something new to keep us entranced until the next dose of despair hits the following morning. Sometimes it can feel like it’s too much, the intense news cycle spinning consistently with the heat, control and discipline of a microwave plate, without ever cracking or stopping to breathe.

But don’t worry. This is not one of those stories.

Jax, from Kentucky, was celebrating his fifth birthday. He had a very special prank in mind for his schoolteacher, plotted with his best friend and partner in crime, Reddy.

Jax asked his mom for a very special haircut — a trim that was identical to Reddy’s shaved head. Thinking their teacher would be unable to tell them apart, they cackled with glee as Jax sat down in the barber’s chair. With the haircut complete, the transformation was total. Jax couldn’t tell himself from Reddy.

The above post, shared by Jax’s mother, was initially intended just for her 325 Facebook friends. But, at time of writing, the photo has been shared over 100,000 times. Now, the touching tale has been told all over the world.

“If this isn't proof that hate and prejudice is something that is taught I don't know what is,” Lydia Rosebush wrote in the post. “The only difference Jax sees in the two of them is their hair.”

According to WAVE 3 News, who filmed the trip to the hairdressers, Jax’s mother first refused the haircut. But as soon as the photograph went viral, she changed her mind. “With all the hate in the world today, we could use this lesson from an almost 5-year-old," she added.

When Reddy and Jax went into school, the teacher played along, and pretended to get confused between them. Now, there could be a national television appearance on the cards. Ellen Degeneres, is that you knocking on the window?

Yet the best friends could very easily have never met. Reddy was born in Africa, but was adopted by a Louisville pastor and his wife several years ago with his older brother. The Weldons, however, are white.

“My sons do not look like me... but we are family all the same," Mr Weldon told WAVE 3 News. "We share the same last name, love each other with all we have, and are a forever family. One day when I am gone, they will inherit all that I have and carry on our family name."

Jax (5) gets a haircut like his friend, Reddy. Now he says they can't be told apart. So sweet. @Independenthttps://t.co/8jMbAFHwK2pic.twitter.com/elQS6Wm1SB

Prejudice is taught — nobody is born with it. That’s the only black and white thing here.

“Jax's me ... and I'm Jax," Reddy tells the camera, grinning ear to ear. It’s a lesson we could all do well to remember as the news continues to spin.