Why Global Citizens Should Care
Ensuring good health and wellbeing for everyone is a key part of the UN's Global Goals — and awareness plays a big role in that. If people don't know that they need treatment and healthcare, they won't seek it. Join us by taking action for health here.

South Africa has the highest rate of HIV prevalence in the world — of nearly 19%. It means that, of people tested, 19% were found to be living with HIV.

But too many people — in South Africa as well as across the world — don’t know their HIV status. It’s for that reason that Global Citizen joined forces with South Africa’s affordable health institution Unjani Clinics to offer residents from underprivileged communities an opportunity to test for HIV and know their status for free.

Sponsored by Johnson & Johnson, this initiative ran on Friday in seven Gauteng-based Unjani Clinics. The clinics are situated in accessible and busy areas where people commute to and from on a daily such as malls, schools, and colleges.

The service was targeted at young people, aged between 15 and 25 years old, as this age group form a high rate of people living with HIV in South Africa.

Today we partnered with 7 @unjaniclinics for a Health Education Day where community members from across Gauteng could get free HIV tests. Thanks to @JNJGlobalHealth for supporting this amazing initiative! #GlobalCitizenpic.twitter.com/6cTRibjTGk

To reach this group, prior to the activation, Unjani Clinics representative visited schools and colleges to inform and invite young people to get tested for HIV at the clinics.

One Unjani nurse at Orlando Soweto region, Minah Mabunda, said this was an important task — not only to inform people about the free testing, but to also take the opportunity to spread awareness about HIV and the importance of getting tested and getting treatment if necessary.

Mabunda said, however, that there’s a general assumption in communities that clinics aren’t friendly places — and the outdoor setting of the Unjani testing on Friday makes it easier to reach people. 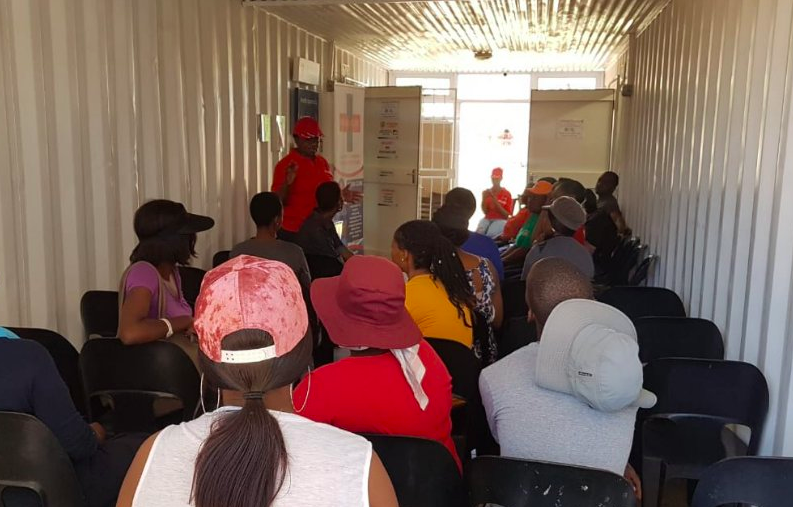 “This is a good initiative because the way in which we are set up makes it easier to reach people walking past, who have no intentions about testing today but end up taking the test because we are here,” she told Global Citizen.

After the health education session, most of the young people then queued up to get tested.

“This is important for us young people because we are sexually active and we need to know about the dangers of HIV and other sexual transmitted diseases,” said Karabo Matsoge, a high school student.

Related Stories Sept. 6, 2018 Miss South Africa 2018 Is on a Mission to Put an End to Tuberculosis

Matsoge also said that more can be done in spreading awareness in South Africa, such as health institutions partnering with influential public figures to educate people and to set an example.

“We follow celebrities and we imitate them a lot, so this could work — especially because it’s positive,” said Matsoge.

Young people registered with Harambee were also stationed as volunteers in assisting, and making sure necessary tool kits were available for the nurses. They also approached people inviting them to participate.

Related Stories Sept. 6, 2018 How Close Is South Africa to Achieving the Global Goals?

“Some people are not interested in testing because they are scared, but through speaking to them and telling them why this is important, they open up to the idea,” said Livhuwani Nevondo, a Harambee youth worker.

Nevondo said that this initiative had exposed her to a number of things that she was not aware of — like the existence of Unjani Clinics and the work that they do.

Being a part of this had also given her the opportunity to get tested for HIV, she said.

“I am not even sure when was the last time I got tested,” she said, “so being here today has motivated me to also get tested.”

Everyone who got tested also received a goodie bag with information health pamphlets and a USB card sponsored by Johnson & Johnson.

Those who got tested at the clinics on Friday also stand a chance to win tickets to the Global Citizen Festival: Mandela 100, presented and hosted by the Motsepe Foundation, which is coming to Johannesburg on December 2.