Child marriage was legal in Australia until 2013. 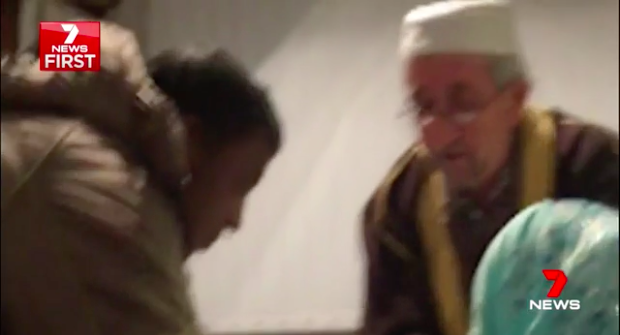 The video doesn’t show much — in a small, carpeted room in Sydney, Australia, an imam stands behind a desk as a man in a puffy winter coat signs papers. A young girl whose face is blurred wears a light blue, sparkly hijab and dress and a few onlookers, including her mother, sit and stand nearby.

But within this sparse setting, a grave scene takes place — a 14-year-old girl was being married off to a man 20 years her senior with her mother’s full blessing.

In the video obtained by Australia’s Channel 7, the rites of marriage are whisked through in a few minutes as the groom signs for the legal rights.

Beforehand, he had gifted the girl’s mother a $1,480 necklace.

Read More: This Girl Stopped a Child Marriage in India. Now She Fears for Her Life.

And that was that — a young girl was turned into a wife, her prospects for life dramatically diminished, and the likelihood that she would endure abuse, unwanted pregnancies, and poverty much higher.

Except that wasn’t the end of the story. Law enforcement learned of the encounter and gained access to the incriminating video from the groom’s cell phone.

The groom and the imam performing the ceremony were then arrested and, presumably, the girl was liberated from the marriage.

What kind of punishment awaits the criminals isn’t known, but through 2013, such a crime could not even be prosecuted in Australia, because child marriage remained legal.

And according to Channel 7, that’s when the practice went underground into offices and living rooms, away from prying eyes. Between Dec. 30, 2014 and Jan. 31, 2017, 57 reports of secret child marriage were made to the government. Of those marriages, four included brides under 10 and 19 included bridges between the ages of 10 and 15.

Many more child marriages presumably happened but were not reported.

And there are others way to get around the law.

"Since 2013 and since forced marriage became a crime, we are seeing another traffic, which is the movement of Australian citizens and residents outside of the country," Jennifer Burn, the director of Anti-Slavery Australia, told Radio Australia. "That's a very concerning issue."

Globally, more than 700 million women alive today were married off when they were under 18. By 2050, this number is expected to rise to 1.2 billion, according to the anti-child marriage nonprofit Girls Not Brides.

Read More: Three-Quarters of Child Brides in This Region Are Also Trafficking Victims

Australia is by no means the epicenter of child marriage in the world, but that doesn’t mean it’s not happening and that enforcement should be overlooked.

It’s a tragedy any time a child — and her future — is married off.