The governor wants to make a few exceptions. 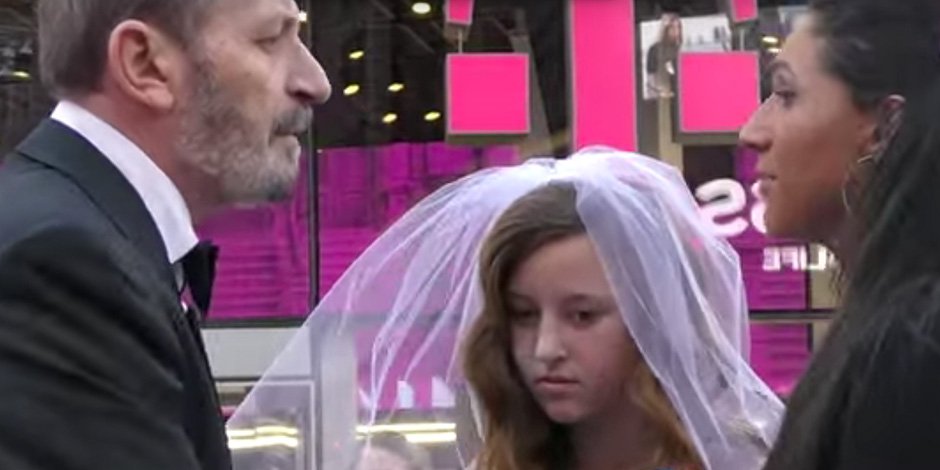 A staged wedding between a child bride and older man was part of a protest in New York City last year.

A bill that would ban marriage entirely for anyone under 18 in New Jersey overwhelmingly passed the legislature earlier this year.

If it passed, New Jersey would have become the first US state to outlaw marriage for minors, in a country where the practice is still shockingly common. Throughout the US, 170,000 children were wed between 2000 and 2010, mostly underage girls married to older men.

But when the groundbreaking bill reached Governor Chris Christie’s desk, he vetoed it.

Read More: Three-Quarters of Child Brides in This Region Are Also Trafficking Victims

Christie’s office argued that the current bill is too absolute and should be amended to make exceptions.

"An exclusion without exceptions would violate the cultures and traditions of some communities in New Jersey based on religious traditions," the Republican governor wrote in a statement.

Instead, the governor said the law can be tightened in two ways that would still deter a significant amount of child marriage.

Currently, children under 16 can get married in the state with parental approval and judge consent. Christie suggests banning marriage for anyone under 16.

Read More. Teens in Bangladesh are Bringing Child Marriage to an End – One Door at a Time

For minors who are 16 and 17, the current law allows marriage with parental approval. Christie suggests making judge consent another barrier.

Because Christie enacted a conditional veto, the legislature will be able to make changes and send a new version to the governor relatively quickly.

But advocates don’t want to budge. They argue that child marriage stipulation should never be made, that the practice is harmful no matter how you look at it, depriving minors, especially young girls, of their future.

"Marriage is a legal contract and it should be reserved for adults," state Sen. Nellie Pou (D-Passaic), a sponsor, said in March. "It is startling for people to learn that there are many underage marriages happening here in New Jersey. As a state, we have a responsibility to protect our residents, and moral obligation to protect children and this bill takes the necessary steps to do that."

Further, advocates, including the nonprofit Unchained At Last, say that parental approval and judicial consent barriers are misleading because oftentimes parents are the ones orchestrating the marriages and find sympathetic judges to approve the arrangement.

Plus, advocates argue that minors are not mature enough to make such a life-defining choice and do not appreciate all the burdens of marriage and therefore should be protected from the institution.

Child marriage is legal with parental permission or court approval in almost every state in the US, and 27 states do not enforce a minimum age for marriage.

Globally, nearly 90% of countries bar marriage for people under 18, but more than half make exceptions, according to the World Policy Center. For women alive today, these exceptions are troublingly routine. More than 700 million women alive today were married before 18, including 250 million who were locked into an arrangement before they turned 15, according to the United Nations Children’s Fund.

"We cannot solve the child marriage problem globally if we don't first solve it here in the United States," Fraidy Reiss, the founder and executive director of the organization Unchained at Last, told CBS News.