After Failing to Respond to Sexual Abuse by Peacekeepers, the UN Has a New Plan to End the Abuse

Each year there are reports of peacekeepers abusing the very people they are meant to protect.

Over the past 15 years, similar scandals have surfaced in many other countries, including the Democratic Republic of Congo, South Sudan, Liberia, Sierra Leone and Guinea.

These are the headline-grabbing cases, but each year there are also frequent reports of individual peacekeepers abusing the very people they are meant to protect. Last year, the United Nations recorded 103 allegations of sexual exploitation and abuse by its peacekeepers; this year, there have been 39 allegations so far.

The United Nations has adopted many different policies to curb this problem in recent years, including better vetting and training of peacekeepers. Despite the United Nations’ “zero-tolerance” policy, the cases have kept piling up. This past March, shortly after assuming office, U.N. secretary-general Antonio Guterres released a report announcing a bevy of new proposals to try to move the needle on this issue. Some of these have since been rolled out, while others have yet to be adopted.

So what are the challenges to solving this enduring problem, and how might some of these new measures work?

Ten years ago, we would get no responses from contributing countries and member states when we asked, ‘Okay, what happened with this case?

In the past, many cases seemed to disappear into thin air, creating a sense of impunity.

“Ten years ago, we would get no responses from contributing countries and member states when we asked, ‘Okay, what happened with this case?’”

“There was an about 80 percent rate of them just ignoring our communication,” says Anayansi Lopez of the U.N. Department of Peacekeeping Operations’ division of policy, evaluation and training.

Since then, a number of measures taken by the United Nations – including the public disclosure of the nationalities of accused peacekeepers – has helped keep individual countries accountable. 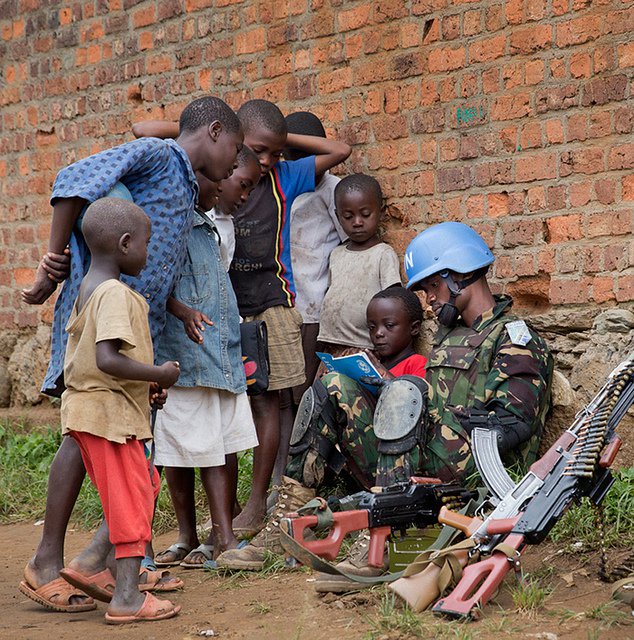 “Now, not only are countries responding, ‘Yes, we did something,’ but they are actually explaining what they’ve done,” Lopez says.

The cases’ outcomes are now published online, though the countries responsible for taking action are not named. Last year, out of 15 substantiated cases, five peacekeepers were sent to jail and four were dismissed or “separated from service.” In two cases, “administrative action” was taken. Seven cases are still pending.

To push for further accountability from individual countries, the United Nations enacted a new measure this year: withholding payments until investigations are carried out.

This is a potentially effective way to ensure that troop-contributing and police-contributing countries are really feeling the pressure.

This is how it works: Countries that volunteer uniformed personnel to peacekeeping operations are reimbursed by the United Nations at a standard rate of about $1,410 per soldier per month. When a peacekeeper is accused of sexual exploitation or abuse, this reimbursement is suspended until an investigation is carried out. If the allegation turns out to be substantiated, then the withheld payments – which are calculated from the date that the sexual exploitation or abuse took place up until the date of the individual’s repatriation – are transferred to a victim’s fund.

This has been the case since 2016, but as of this year, if the country fails to carry out an investigation, then the withheld payments also go into the victim’s fund.

Sarah Taylor, a women’s rights advocate for Human Rights Watch – which has repeatedly called on the United Nations to do more to prevent abuse by peacekeepers – believes this could be a step in the right direction.

“This is a potentially effective way to ensure that troop-contributing and police-contributing countries are really feeling the pressure,” she says.

Focusing on the Victims

The United Nations has frequently been accused of failing to sufficiently support victims, and the latest scandal in Haiti is no exception. Several victims have told reporters that the United Nations never communicated the results of U.N.-facilitated paternity tests, though United Nations representatives have disputed this claim.

Sienna Merope-Synge works with the Institute for Justice and Democracy in Haiti. In partnership with the Haitian law firm Bureau des Avocats Internationaux, her organization represents 10 of the women filing paternity suits.

She says that four women had DNA tests administered through the United Nations, but that they still haven’t received the results. She says obtaining results could help these women seek child support via the Haitian court system.

“The clients we work with – generally young, very marginalized women – I don’t think they have any faith that the U.N. is going to ensure just accountability,” Merope-Synge said. “For many women, prosecution is important. But equally, for many women, the emphasis is on their economic survival. They need to feed their kids – that’s the pressing need.”

One of the major measures announced by Secretary-General Guterres last spring was the appointment of victims’ rights advocates. The top advocate, who will be based at U.N. headquarters in New York, was named in late August. Jane Connors, a longtime international human rights advocate from Australia, most recently served as international advocacy director, law and policy, for Amnesty International.

Several other victims’ rights advocates will work in the field, starting with the missions where the highest number of allegations have been reported: Central African Republic, Democratic Republic of Congo, Haiti and South Sudan. According to the U.N. Department of Peacekeeping Operations, those in the field have already been chosen and started their work.

In the past, Lopez says, “there were many times that the victim moved around and we lost track of them. So it was important to have someone to monitor that person and monitor the actions that are taken from beginning to end, making sure that every victim has personalized care and follow-up.”

One new measure came as a surprise simply for the fact that it wasn’t already in place. The United Nations is currently devising a tracking system to make sure that nobody who has been found guilty of sexual abuse or exploitation in one part of the organization is hired for a job in another part. Essentially, this means developing a program that links up different human resources departments.

“This will be a flash to employers: ‘Don’t hire,’” says Lopez.

Getting Everyone on the Same Page

Another major new proposal, which U.N. member states should vote on in September, is Secretary-General Guterres’ idea for a “member state compact.”

This is a good indication that things are moving in the right direction, as the first step toward change is to secure agreement amongst states.

This voluntary agreement would notably define specific commitments of both the United Nations and the member states in combating sexual exploitation and abuse.

“This is a good indication that things are moving in the right direction, as the first step toward change is to secure agreement amongst states,” Rosa Freedman, a professor of law, conflict and global development at the University of Reading, says.

But she says that this agreement, by nature, will take time to craft.

“Unlike bilateral and multilateral agreements, whereby states’ agreements to do something are contingent on others upholding their promises, the unilateral promises made in human rights instruments or in compacts remain in place regardless of whether other countries breach obligations.”

“As such, these instruments require large-scale agreement from states during their creation, and the negotiation process takes longer than with other international instruments.”

Taylor, of Human Rights Watch, is cautiously optimistic: “If member states are willing to put themselves on the line and talk sincerely and concretely about what national-level accountability looks like, what transparency looks like, what support to victims look like […] then those are things that could be useful.”

And What About Female Peacekeepers?

A short passage of the Secretary-General’s 82-page report mentions his belief that greater numbers of female peacekeepers “would help advance United Nations efforts to prevent and respond to sexual exploitation and abuse,” an idea that has been upheld in a number of studies.

The idea here is not that female peacekeepers should be responsible for policing their male counterparts when they already face the challenges of underrepresentation and discrimination. It is rather, as the secretary-general writes, that a greater number of women allows the United Nations to “build stronger relationships with the societies we serve.” And those strengthened relationships, in turn, “improve both prevention and the quality of reporting, as a result of greater trust developed with local women and communities.”

[Cases of sexual abuse] send the message that women are absolutely not welcome.

Boosting the number of female peacekeepers is not a new proposal. It is the reaffirmation of a larger policy: The United Nations has been trying to achieve this for years. At the moment, these numbers remain very low, with women representing only 3 percent of military personnel and 10 percent of police personnel. Cases of sexual abuse by peacekeepers can further discourage women from joining up.

“The problem is, they send the message that women are absolutely not welcome,” Taylor says.

Experts both inside and outside of the United Nations say that none of these new mechanisms alone will solve the problem of sexual abuse by peacekeepers.

“No one measure on its own will address the issue, but a holistic range of measures […] taken together will be key to addressing sexual exploitation and abuse,” Freedman says.