These communities are on the frontline of climate change. 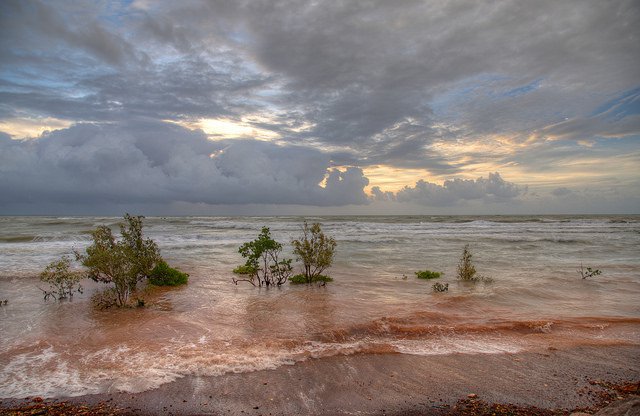 The Torres Strait Islands are often a forgotten part of Australia’s geography. The archipelago consists of 274 islands, the most northerly inhabited island is just 6 kilometres from Papua New Guinea. These islands are home to over 4,000 Torres Strait Islanders who are currently facing challenges brought on by our changing climate.

Oxfam recently visited the Torres Strait Islands and witnessed first hand the challenges these communities are facing, including coastal erosion and inundation plus roads being washed away into the sea.

“Torres Strait Islanders have contributed almost nothing to the causes of climate change, but are being hit first and hardest by its impacts,” – says Helen Szoke, Oxfam chief executive.

Recent extreme weather events such as Cyclone Pam in Vanuatu acts as a reminder that it is often counties that least contribute to global warming that are unfairly affected.

Dennis Gibuma is an elder from Boigu Island who says the situation is worsening but leaving will be a last resort.

“Our seawall is no longer any good,” he told The Guardian. “When the high tide and strong winds come together, it breaks. We pray we don’t lose our homes. We don’t want to leave this place.”

Rising sea levels, annual flooding, unpredictable weather patterns and king tides are also threatening people’s livelihood; especially those who depend on fishing and are affected by the damage the extreme weather is doing to the marine environment.

Depending on greenhouse gas emissions sea levels are predicted to rise between 75cm and 1.5m by the end of the century. The Australian Department of Environment and Energy, predicts that a rise of just 50cm could increase the chance of mainland Australia flooding by 300 times. The Torres Strait Islands will be the most vulnerable.

According to The Guardian displacement caused by climate change will lead to mass migration with up to 150 million climate refugees expected by 2040. However there is no legal framework for those displaced by natural disaster. The UN refugee convention that was established in 1951 following World War II does not account for climate refugees. In fact displaced citizens from low-lying Pacific nations such as Tuvalu and Kiribati have already applied for refugee status in New Zealand but their claims were rejected.

As more people lose their homes due to global warming and rising sea levels, perhaps it’s time for ‘climate refugees’ to be legally recognised.