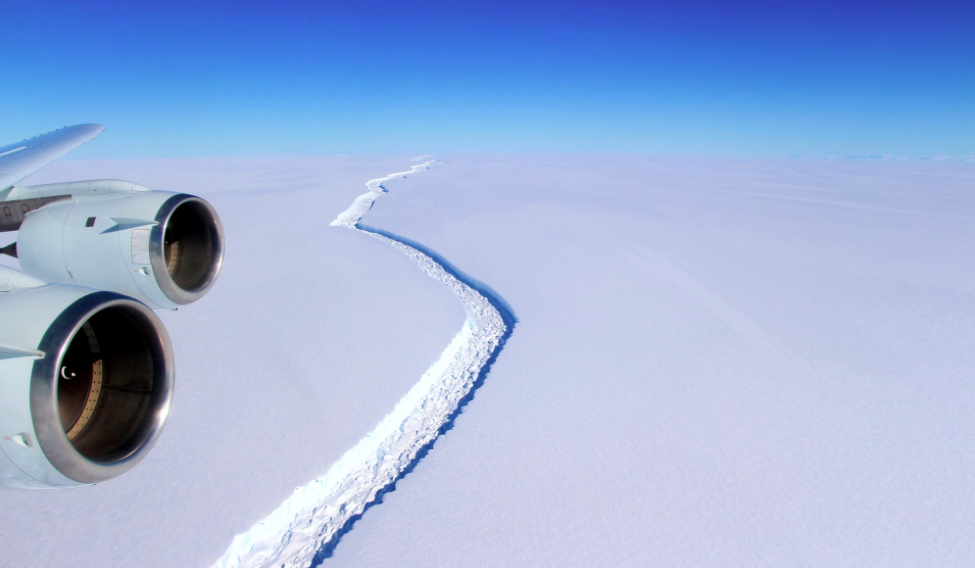 And now the Larsen C ice shelf — far bigger than the other two and closer to the center of Antarctica — is starting to give out, too.

On Wednesday, an iceberg the size of Delaware weighing more than a trillion tons broke away from the ice shelf, “fundamentally [changing] the landscape of the Antarctic peninsula,” according to the Midas Project which studies the region, and stoking fears that the structural integrity of Larsen C could be at risk.

The Larsen-C rift opening over the last 2 years from #Sentinel1pic.twitter.com/MT9d3HAw1M

If Larsen C collapses in the years ahead, then sea levels will rise substantially. Losing this ice shelf could also trigger further ice collapse throughout the Antarctic.

“There is enough ice in Antarctica that if it all melted, or even just flowed into the ocean, sea levels [would] rise by 60 metres,” Martin Siegert, professor of geosciences at Imperial College London, told The Guardian.

Many scientists are providing context to calm some of the fear surrounding the event.

While this iceberg is one of the biggest-ever recorded, ice shelves regularly shed sections of ice to achieve equilibrium. So the loss of this particular iceberg isn’t cause for alarm in and of itself. In fact, some scientists argue that climate change might not have played a role in its erosion.

But there are others who point to what seems like the mark of climate change.

Temperatures in Antarctica have increased at a much higher rate than in the rest of the world, and this rise has weakened ice throughout the region, making it more likely for cracks like the one that eventually unleashed this iceberg to form.

If climate change caused this event, then it’s likely a harbinger of things to come.

Larsen C is now at its smallest size in recorded history. Even though it has shed ice chunks in the past, it has never shed as much ice as it has in recent years.

To give a sense of the true dimensions of the Larsen C iceberg, here's an animation based on real data, with something familiar for scale pic.twitter.com/OdQA07qhBb

The ice shelf still has two “anchors” that are keeping the structure in check, but if they erode and collapse, then little will be stopping trillions of tons of ice from sliding into the water.

“If the ice shelf breaks apart, it will remove a buttressing force on the glaciers that flow into it,” Eric Rignot, a climate scientist at the University of California, Irvine told The New York Times. “The glaciers will feel less resistance to flow, effectively removing a cork in front of them.”