This Is What It Actually Costs Countries to Accept Refugees

*Spoiler* Refugees are not burdens to the economy. 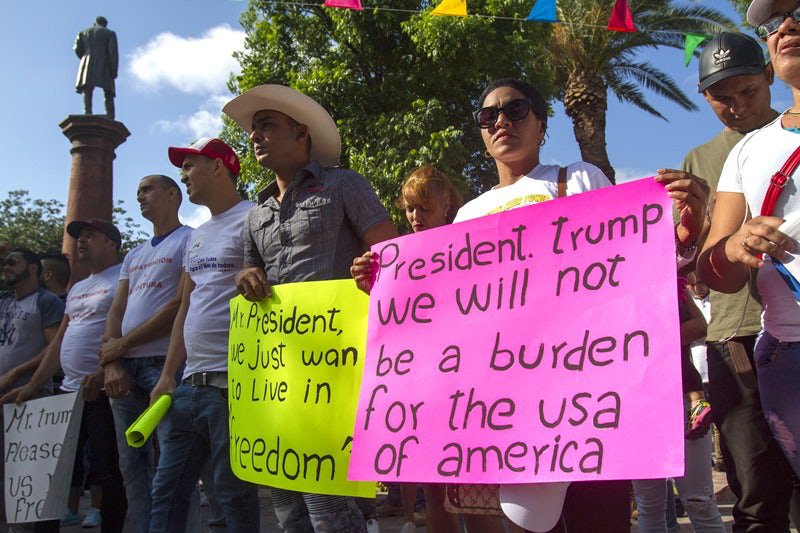 Some 300 Cubans are in Nuevo Laredo, Tamaulipas, Mexico on April 8, 2017, expecting to be allowed the seek refuge in the U.S. The U.S. on January 1, 2017, removed the immigration privileges for the Cubans who now need a visa to enter the country.
News Deeply/ AFP/Julio Cesar AGUILAR

This article originally appeared on Refugees Deeply, and you can find the original here. For important news about the global migration crisis, you can sign up to the Refugees Deeply email list.

The arrival of more than a million refugees and migrants in Europe has brought widespread concern they will become an economic drain on the countries that welcome them. As with any large social shift, deep concerns are reasonable.

But these economic effects are not obvious. A newcomer who takes a job washing dishes may prevent a native worker from taking it. But that person also complements natives who wait on tables, manage the restaurant or own it. And a newcomer who receives benefits today can generate tax revenue tomorrow.

No one can understand the economic consequences of large migrations without careful economic research on the ripple effects – subtle, invisible, delayed. When politicians brush this aside they are trying to con you. When economists have studied past influxes of refugees and migrants they have found the labor market effects, while varied, are very limited.

The nature of these effects also depends on other policy choices by the host countries. More than anything else, the economic effect of migrants and refugees is a decision. In a new paper with Jennifer Hunt we looked at large flows of people from Algeria to France in 1962; from Cuba to Miami in 1980; from the former Soviet Union to Israel in the 1990s; and from the Balkans to the rest of Europe in the 1990s.

Each of these episodes brought a sudden flood of new workers on a scale comparable to recent flows to Europe, offering a chance to compare what happened in jobs and occupations where the migrants clustered.

The sudden movement of over a million people from Algeria to France raised the unemployment rate for low-skill French workers by about one fifth of a percentage point. Balkan refugees across Europe also seem to have caused a small, short-term increase in native unemployment, though this effect cannot be reliably distinguished from statistical noise.

The other flows had either no effect or a positive effect on the local labor market. The arrival of 125,000 Cubans into Miami had no effect at all on unemployment and was followed by a small rise in average low-skill wages. And the movement of Soviet refugees into Israel, enough to raise the country’s population 12 percent in just four years, saw a substantial rise in the wages of the occupations they crowded into.

While this research focuses on wealthier destination countries, the evidence in developing countries – which receive the bulk of refugees – seems similar. In Turkey there appears to be a small negative effect on native employment caused by the influx of Syrians, but not in Jordan.

These studies are limited because they measure what happens to native workers who stay in the places and occupations where migrants cluster. They do not fully account for adaptation by natives who change or move to a new place, job or skill level.

Read More:1 Million Syrian Refugee Children are Out of School — Here's Why It Matters

A recent study looked at the effect of waves of refugees like Iraqis and Afghans into Denmark. It uses a national database that follows each individual Dane over two decades, even as they change residences and jobs. They found that refugees did initially displace small numbers of native workers but most often into jobs requiring more complex tasks and native language skills, where they were more productive. The most affected natives typically ended up earning 3 percent more than they had before.

This churn in the Danish labor market suggests one reason why the labor market impacts of migrant inflows vary from place to place. To capture the opportunity that these inflows offer, workers must count on flexible labor markets that allow them to adjust.

The unemployment effects of Balkan refugees in the 1990s were different in different parts of Europe. Specifically, countries with the most rigid labor market institutions – rules that make it more costly to take on and lay off workers – saw the biggest rise in unemployment. The choice to protect incumbent workers made it more difficult for unemployed natives to find new jobs where they could complement rather than compete with newcomers.

In the context of large migrant flows, labor market policy is a form of refugee policy. The economic effect of the inflow is in large part a policy decision.

Nowhere is this clearer than in the fiscal effects of refugees. Almost all refugees receive substantial public assistance when they arrive and years afterward. Countries vary in how much of this assistance refugees are asked to pay back later. But by far the most important determinant of the net fiscal effect is how quickly refugees integrate into the labor market and start generating tax revenue.

In the U.S., the average refugee becomes a net contributor to public coffers eight years after arrival. The assistance they received when they arrived was, in purely monetary terms, an investment with a positive return. Countries that actively deter asylum applicants from working are making the decision to increase their net fiscal burden.

There is significant room for innovation to reduce the short-term fiscal burden of refugees. The organization Talent Beyond Boundaries (TBB) is developing new ways to match skilled Syrian refugees to jobs overseas, while an international loan fund has been proposed to help cash-constrained refugees. Canada has pioneered private sponsorship of refugees, and other countries are considering following suit. My colleagues at the Center for Global Development have proposed a fund to help nontraditional destination countries bear the upfront fiscal cost of assisting refugees.

Almost a million people arrived in Germany in 2015 because other countries did not accept substantial shares of them. The labor market effects on Germany appear to be minimal so far. But those effects would be negligible on all countries concerned if the burden had been broadly shared.

The clearest historical experience in this regard is the enormous flow of Hungarian refugees into Austria in 1956. They produced a spike of 3 percent in the population of Austria. Had Austria been left alone to assist them, there is little doubt that those 200,000 Hungarians, trapped in Traiskirchen and other camps, would have become a large economic and fiscal burden.

What happened instead was that a coalition of 37 countries, on many continents, shared the responsibility. They moved so quickly that they had resettled over half of the refugees within 10 weeks. They were nothing but an economic boon to the countries they went to; one of them came to the U.S. and ended up founding the tech giant Intel. Coordination eliminated the burden.

The economic effects of the new wave of asylum seekers and other migrants will be complex. The International Monetary Fund projects that this wave will raise economic growth over the long term by providing Europe with young and energetic workers. The labor market effects and fiscal effects are likely to be negative and small in the near future for some countries but more positive in countries with more flexible labor market regulations.

But the greatest determinant of these effects will be the extent to which continuing flows are shunted to just a few destinations or broadly shared. This depends less on migrants’ decisions than on the policy decisions of the recipient countries and their allies.

The views expressed in this article belong to the author and do not necessarily reflect the editorial policy of Refugees Deeply.