These Swimsuits Look Amazing and Are Great for the Planet, Too

Saving the ocean one bikini at a time 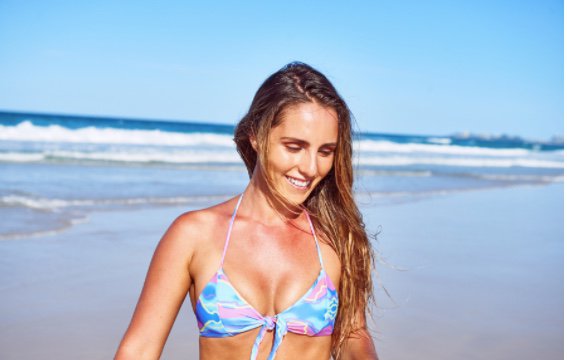 As a young globe trotter, this Aussie girl landed herself a job in the Cayman Islands working with wild stingrays and feeding them for the tourists. She was known by her American colleagues as “Junior Steve Irwin" and she spent eight hours a day swimming in the sea.

From there Gabriele's love for the ocean and travelling the world continued to grow. Through her travels she discovered just how polluted our oceans are and the impact our wasteful, disposable lifestyle is having on the environment.

Since then Gabriele’s marine research projects have taken her around the world; from studying sea lions and sharks in the Galapagos to coral reefs in Indonesia and humpback whales in Equador.

She has now combined her love of the sea with her interest in fashion and has launched the environmentally conscious brand, OceanZen Bikini.

The brand supports a healthier ocean by using a unique fabric made from rescued fishing nets and plastic bottles from the ocean. And there’s unfortunately no shortage of those, with only one in five bottles being recycled and the rest destined to landfill and the sea.

The passionate team behind the brand are environmentalists and ocean lovers and say they  are “saving the ocean one bikini at a time.”

Adidas also released some sustainable swimwear pieces when they teamed up with Parley for the Oceans, an environmental incubator and non-profit committed to reducing plastic waste in the oceans. The fabric is made from upcycled fishing nets and plastic debris collected from coastal areas.

The problem with plastic is that it lasts a lifetime — it never breaks down. Instead it breaks up into smaller and smaller pieces leaching chemicals into the ocean.

This microplastic debris is very dangerous to seabirds and marine life who accidentally ingest it. In fact 90% of all seabirds have consumed plastic and it’s estimated that by 2050 all birds will have eaten some. One of the problems with this is when the birds’ stomach is filled with plastic it tricks the bird into thinking it is full and can lead to severe malnutrition.

This beach would look a whole lot nicer without plastic bottles don't you think??⠀ ⠀ We know it can be super challenging in our society to be completely plastic free (we tried it for a whole month and yep... it's hard)....⠀ But if you can make a tiny change to your daily lifestyle... perhaps using a stainless steel or glass water bottle instead of plastic bottles.. YOU can help make such a positive impact 😀😀 Help save the ocean ♻The more the merrier!!⠀ ⠀ #plasticfreebyron #take3 #1percentftp #plasticfree #saynotoplasticbags #oceanzen #sustainablefashion #sustainableswimwear

“Global plastic production doubles every 11 years. So in the next 11 years, we’ll make as much plastic as we’ve made since plastic was invented. Seabirds’ ingestion of plastic is tracking with that.” research scientist Chris Wilcox told National Geographic.

This World Ocean’s Day, 8 June, is a great time to celebrate environmentally conscious brands such as OceanZen who are doing their bit for the ocean by removing harmful plastic. If you’re near a waterway, river or ocean today (or any day) do your bit and take some rubbish with you.

You can also check out OceanZen’s blog and read their top 8 tips for saving the ocean.