“Don't let things like being the first to do it stop you.” 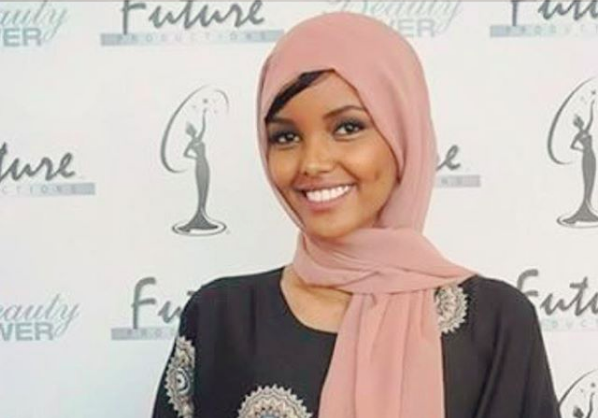 “She’s making history tonight,” says an announcer as a woman in a blue-and-yellow hijab strides confidently across the stage. Behind her, the words “Miss USA” shimmer in emblazoned gold. Before her, a crowd cheers as the announcer introduces her, then roars again as she hits her pose.

Her name is Halima Aden, and this weekend she did make history as the first woman to wear a hijab during a Miss Minnesota pageant. She broke the state’s cultural mold not once but twice this weekend, when she also wore a controversial burkini for the competition’s swimsuit segment.

“That’s the kind of person I am,” Aden said in a video for Minnesota’s Star Tribune. “I like to try new things.”

She’s not the first to make a statement with Islamic clothing on the runway — Indonesian designer Anniesa Hasibuan had every one of her models wear a hijab at New York’s Fashion week this September.

But for Aden, wearing a hijab speaks not only to the place she’s from, but to the place she now lives. Since the 1980s, Somalis have been a significant and growing ethnic group in the Twin Cities area. In 2014, a Minnesota census found 26,000 Somali people living in the state, many of whom migrated after the Somalian Civil War in the 1990s.

Aden is a part of that history. Born in a refugee camp in Kenya, Aden moved to the town of St. Cloud, Minn., when she was just a child. Now she’s bilingual, fluent in both English and Somali and attends St. Cloud University.

“I’m just as much of a Minnesotan as most of you are,” she says in the video.

Halima Aden makes history as the first woman to compete wearing a burkini during the Miss Minnesota pageant @StarTribunepic.twitter.com/QEJWToIFC1

Aden’s transition may not have been easy. In January, a Minneapolis newspaper dubbed her hometown of St. Cloud the “Worst place in Minnesota to be a Somali," citing xenophobia, Islamophobia, and class-anxiety as causes of anti-Somali sentiment.

So there was something symbolic in the 19-year old taking to the show so confidently, wearing an easy smile as she walked to Bruno Mars “Uptown Funk.”

For her, the competition wasn’t about winning, but rather an opportunity to test social norms and represent her culture. It’s poignant, too, considering Miss USA was once owned by President-elect Donald Trump, who, during his campaign, promised to ban Muslims from the United States. She made it to the semifinals from a pool of 45.

“I feel like that’s kind of sad, when a woman thinks that she’s not beautiful, you know, because of society’s definition, when really everybody has something to bring to the table,” said Aden. “Beauty isn’t something that we can define based on shape, color, or size.”

“But you know that’s the point of being an American,” she goes on. “You go out for the things that interest you, you break barriers, you don’t let things like being the first to do it stop you or get in the way.”