Snapchat Ditches ‘Yellowface’ Filter Because No 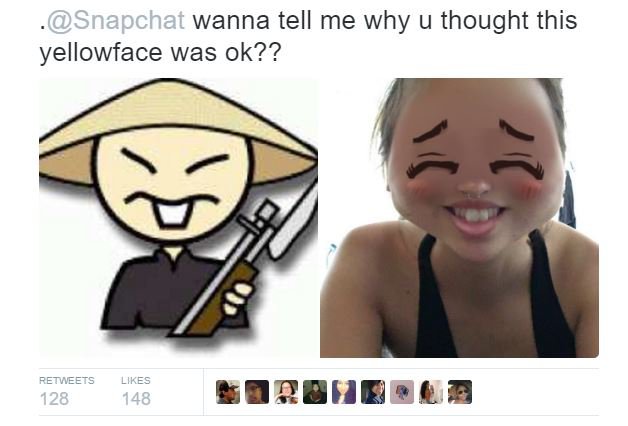 The reaction online was immediate and overwhelmingly negative.

@Snapchat@snapchatsupport idk if u realize, but this filter is yellowface and u should take it down pic.twitter.com/MLSHz0Bbkl

"This anime-inspired lens has already expired and won't be put back into circulation," Snapchat said in an official statement on Wednesday. "Lenses are meant to be playful and never to offend."

Read More: Standing Up to a Cartoon That Insults All Indians

The filter being “anime-inspired” was immediately rejected by many online activists.

This aesthetic is from anti-Asian propaganda, not anime, as Snapchat claims pic.twitter.com/i2qK2iG6sr

For some critics, this new incident fits a longer history of cultural insensitivity and out-right racism in Snapchat’s filters.

In April, the messaging app released a “Bob Marley” filter that blended the artist’s likeness with the user’s face. Despite the company claiming it was an ode to the famous reggae star and was developed “in partnership with the Bob Marley Estate,” users were quick to call it modern-day “blackface.”

Read More: Hollywood Should Represent All of Us! The Truth of #OscarSoWhite

😂😂 Snapchat you're not slick

Snapchat is now the third most popular social media network with more than 150 million people using it each day. Those users are demanding respect.