This animal may be cute but being soon-to-be-endangered is not. 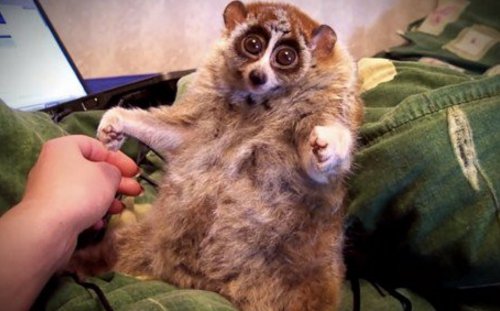 Fueled by millions of viewers and sharing youtube videos, the world fell in love with the slow loris. The animal became a popular exotic pet...despite being illegal.

In 2009, a YouTube video featuring a slow loris being tickled went viral. Then in 2012, another video featuring a slow loris eating a rice ball also went viral. Still in 2016, these videos get millions of viewers. While the videos educate individuals about the existence of this rare species, they also helped create an overwhelming demand for the animal as an exotic pet because the videos portray the exotic slow loris as a cute, funny companion.

Tragically, the increasing demand for exotic pets is exploiting animal species and viral videos like these (most likely inadvertently) support the illegal exotic pet trade. Snatching animals from the wild for illegal pet trade is a major threat to endangered species already at risk because of habitat loss and poaching. It threatens biodiversity and the wider environment. The Wildlife Conservation Society reports that the threat of wildlife species extinction is an immediate problem. Although illegal in most areas, the wildlife trade is valued between $5-10 billion USD annually, surpassed only by the illegal trading of drugs, arms, and humans!

FACT: The Slow Loris has a very strong grip. It can hang from a branch, attached by its feet, for hours when it uses both hands for feeding #slowloris

At a glance, it seems harmless that the owner of the slow loris posted a video while tickling their furry friend or feeding the animal a rice ball, but these videos are more harrowing than happy.

Tickling for the slow loris is actually torturous and rice balls aren’t the most nourishing food item for the exotic animal.

All eight species of slow lorises are threatened by exotic animal trade and the Javan slow loris species, is one of the 25 most endangered primates worldwide.

Japan most frequently takes part in the illegal trade of the slow lorises. The animals are often found cooped up in small cages, malnourished, and traumatized. While traveling to a trading destination, many lorises die because of overcrowding and lack of proper resources.

When a slow loris is prepared for pet trading, it’s teeth are removed...without anesthesia (could you imagine?). In the video, the slow loris is not waving its arms in the air like it just doesn’t care because it’s ticklish, but rather the animal’s response is a fearful posture, meant to protect itself by exposing the venomous gland stored inside its elbows. This is why a slow loris’ teeth are removed, because exposure to a bite is poisonous, sometimes even deadly to humans.

Being a nocturnal animal, the exposure to bright lights and loud noises is traumatising making the slow loris unfit to be a domesticated pet. These moments cause deep stress for the vulnerable animal.

In a time of social media stardom, videos go viral within months, days, or seconds of posting. Social media has not been around for long enough to look at the long term side effects it can have on vulnerable subjects like rare animals. The good news is, It’s not too late to explore this subject area. Viral videos like the ones that introduce wild animals as pets or are kept in cruel captivity directly support the illegal trade of exotic animals and the malicious treatment of wildlife.

Is our video entertainment worth this kind of injustice?

These viral videos promote unfair treatment and injustice, but the truth can also go viral.  It all begins with helping to change how you and others think about animal videos watched and shared on social media.

It's absolutely okay if you have laughed at a video like this in the past (I have), but the important part is that after you learned the truth you can change things! A great first step could be ask yourself these kinds of questions:

1. Where was the video recorded? The wild, a reputable sanctuary, or a scam-turary?

2. If it is a baby animal, where is its mother? Was the baby orphaned and are they being raised for release back into the wild?

3. What sort of behaviors are the animals exhibiting, could these behaviors be linked to mental distress or anxiety?

FACT: Slow Lorises sleep during the day, rolled up in a ball in hidden parts of trees above the ground! #slowloris

Learn more about slow lorises and a campaign fighting to end the unfair treatment towards them at: “Tickling is TORTURE”.