These Machines Will Compost Food on the Spot 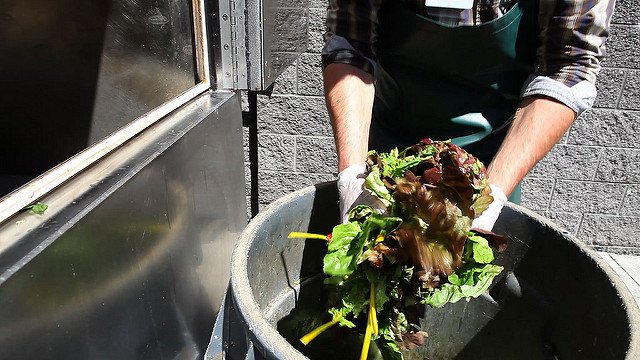 When it comes to food waste, young children are often the worst culprits. They’ll take a few bites, decide they’re not hungry, and throw the rest away.

Luckily, some forward-thinking schools are expanding their science curriculums to include lessons on food sustainability — teaching children how important it is to not waste food and how to properly discard leftovers.

In Singapore, schools are going even further than this, installing food waste "digesters" right in the schools. Ten primary and secondary schools in Singapore will install the contraptions by the end of May, the Straits Times reports.

Chongzheng Primary School, the first to install a food waste digester, produces about 37 pounds of food waste each day. Now, that excess food will be converted into a little more than 4 pounds of compost within 10 hours.

The food digesters are part of a broader campaign by the National Environment Agency called the Love Your Food @ Schools’ Project, which aims “to encourage youth to cherish food and take action to reduce the amount of food being thrown away.” The campaign was rolled out at Chongzheng Primary School on Youth Environment Day that took place April 7.

Did you know that NUS also has a food waste digester, located at The Terrace canteen (School of Computing/NUS... https://t.co/wCuYIS8joH

About 500 students from 30 different schools attended the event, which featured interactive lessons about the resources that go into growing food, reducing food waste, and donating leftovers. They also learned about how food waste can be converted into compost with the digesters.

When food waste goes to a dump, the lack of oxygen during decomposition releases methane, a greenhouse gas, into the atmosphere.

Food waste digesters use a process called anaerobic digestion, in which excess food decomposes in a chamber that harnesses the methane and converts it into electricity. The leftover material can then be used as a soil enhancer.

In 2016, Singapore generated 791,000 metric tons of food waste, a mark that’s  expected to rise with population growth and economic activity, according to the Straits Times. Environmental officials hope that teaching youth food sustainable practices in school-based programs can stem that trend.

“Taking on simple habits like ordering only what you can finish, asking for smaller portions if you intend to eat less, donating excess food, or joining efforts to recycle food waste can make a big difference,” said Masagos Zulkifli, Minister for the Environment and Water Resources.

“As young people, you have the greatest stake in safeguarding the environment for your future. Your lifestyle choices will also have a far-reaching impact on natural resources," he said.

Globally, one-third of the food produced for humans ultimately gets thrown away. The tiny nation of Singapore can’t take on food waste alone.

There are many creative solutions to food waste across the world, some of which also tackle hunger.

A community fridge in London, for instance, puts excess food to use before it begins to decompose — and feeds a person in need.

Non-profits in the US hand-deliver leftover restaurant food to homeless shelters.

Supermarkets in Canada are donating extra food to food banks, while in Denmark, they’re reducing waste by selling foods individually rather than in bulk packages.

These methods employ different approaches to food sustainability — one approach gets excess food into the hands (or, mouths) of hungry people while another promotes greater efficiency in food production. Both are effective.

Food sustainability is good for people and good for the planet. Eliminating food waste is possible, but it will take committment on the part of governments, like Singapore.