27,000 people just called on Britain to create a world where #SheIsEqual.

Remember when 1,000 musicians came together to perform a massive rendition of "Learn to Fly” by the Foo Fighters — and convinced the band to perform a 27-song set in their tiny city in northern Italy?

Well, it turns out Global Citizens can be just as persuasive.

In the span of exactly two weeks, 27,420 of you tweeted the UK government to urge them to fight for gender equality around the world.

Turn the music up, people— because you’ve just got Britain to respond.

You mobilised to ask the UK a simple question: Will Britain use UK aid to create a world where #SheIsEqual — and empower women and girls to escape poverty, fund girls’ education, support female farmers, and invest in maternal health care?

Now, the UK’s Department of International Development (DfID) have said they will “proudly continue” to fight on four fronts.

Hi @DFID_UK. We agree — we're proud to see the UK leading the way for gender equality. Will you join us at #GCFest and @GlblCtzn Festival: Mandela 100 to commit #UKaid to these vital areas? Over 23,000 Global Citizens have invited you! #SheisEqual

In a letter to Global Citizens, Rt Hon. Lord Bates, minister for international development, outlined all the work DfID is doing to tackle each area through UK aid. From 2011, Lord Bates highlighted that UK aid is already being invested in gender equality, with some spectacular results. The UK’s international aid budget is:

“The UK is leading the global fight to uphold women’s rights and improve the lives of the poorest women and girls, creating a world where #SheisEqual,” said Lord Bates. “We know that investing in women and girls works. Achieving gender equality and empowering all girls and women is the right thing to do, and is in everybody’s interest - it is fundamental to lasting poverty reduction, and to building prosperous, resilient economies and peaceful, stable societies.”

“Gender equality is a top priority for the UK and we will proudly continue to champion it,” Lord Bates added. “If we are to achieve gender equality we must all work towards it and keep our ambition high.”

Women and girls deserve – and now demand – to be treated as equals. Stand up with fellow Global Citizens around the world for female empowerment and gender equality. Take action now: https://t.co/zF0ZEV5wr7#SheIsEqualpic.twitter.com/vBZ4Xbq1QB

We applaud the life-changing results UK aid is already achieving. But DfID’s response is far from the end.

UK aid has done some incredible work in the world, but more is necessary to fundamentally improve the lives of women trapped in extreme poverty. The #SheIsEqual campaign has captured the attention of the UK government, but now we need to go the extra mile to get them even more excited about changing the world.

There are some specific funds that require urgent support. The organisations are best placed to deliver life-changing results to women in poverty — and Britain, as one of the planet’s largest economies, is perfectly positioned to increase its backing. 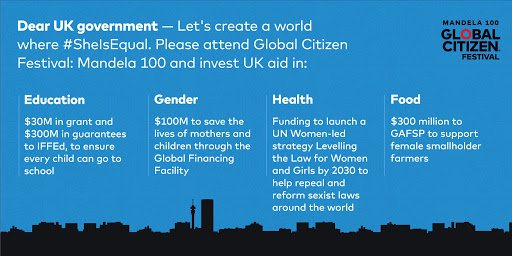 That means an additional $300 million to help launch IFFEd to get every child into school; an extra $100 million to GFF to help prevent mothers from dying while bringing life into this world; funding to help repeal and reform sexist laws; and $300 million to GAFSP to help female smallholder farmers get the same access to resources as their male counterparts.

And in December there will be 90,000 roaring Global Citizens waiting to hear the good news in Johannesburg, South Africa, for Global Citizen Festival: Mandela 100. We might not be bringing back the Foo Fighters (we nailed that back in 2012), but how does Beyoncé, JAY-Z, Ed Sheeran, Pharrell Williams, Chris Martin, Usher, and Eddie Vedder sound?

We’re only scraping the surface. But first, let’s give women around the world a real reason to celebrate — thank DfID for responding, and raise your voice to ask them to do more.