Sharks Are Freezing to Death in the Arctic Outbreak

The organization described one of the animals as “a true sharkcicle!”

Frozen sharks are washing up along eastern shorelines this week, providing a stark reminder that humans are not the only species suffering from the “Arctic outbreak” sweeping across the US through the next several days.

The news of the sharks comes from the Massachusetts-based Atlantic White Shark Conservancy, which has recovered the icy corpses of at least three thresher sharks on the shores of Cape Cod Bay after reports from locals, according to the Cape Cod Times.

The organization described one of the animals as “a true sharkcicle!” and respondents collected tissue samples with the help of the Massachusetts Division of Marine Fisheries and the National Oceanic and Atmospheric Administration’s Fisheries Service. These samples will be assessed once they thaw to further elucidate the cause of death.

The sharks weren't turned into ice cubes in the water, according to Greg Skomal, Senior Marine Fisheries Scientist at MA Marine Fisheries, who spoke with Global Citizen. Instead, it's likely that the colder temperatures triggered a rapid migration south, and that some sharks got trapped in Cape Cod Bay and washed ashore where they died.

"Instead of a leisurely migration, it was likely more hurried and rushed, one that would put them along the coastline," he said. "Particularly in a dynamic area like Cape Cod Bay where there are sand bars, shoals, and dramatic tides, if they don’t get out quickly, they can get easily trapped." 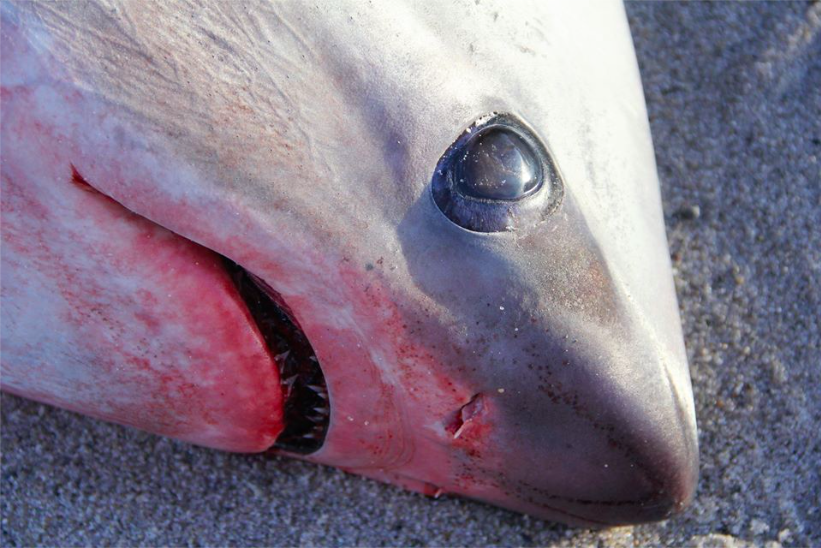 Because sharks are cold-blooded, they often need to migrate once temperatures plummet to avoid becoming too cold, according to Shark Saver. Some sharks, like the threshers, are able to elevate their body temperatures and last in cold waters longer. Skomal said that that's why the threshers were still in the area, while other sharks had to go south earlier.

One or two threshers wash up every few years and end up frosted along coastlines, Skomal said. Turtles and some fish also get stranded on the shores of Cape Cod Bay during winter months, he said.

Other cold-blooded animals, such as frogs, are able to freeze and then thaw once the weather warms, according to Penn Live.

Similarly, warm-blooded animals in freezing environments tend to migrate or hibernate. Many, however, stay put and endure the cold. While small birds seem especially susceptible to cold temperatures, they’re actually well-equipped to deal with sub-zero cold blasts by puffing their feathers and finding good places to roost, according to Birds and Bloom. In fact, their biggest threat in winter months is the lack of food and water, according to bird experts who have been sending out PSAs on Twitter.

As freezing temperatures persist, please help songbirds & other wildlife by putting out some water for them to drink. It’ll help them conserve precious energy/body heat—and you’ll be amazed by what shows up!

Animals around the world are sensitive to temperature changes. As global temperatures continue to rise because of climate change, many animals are being forced to change their habitats and adapt or die off.

Read More: 6 Signs That Climate Change Got Way Worse in 2017

Polar bears, for instance, are being forced to hunt on land where there is less food, rather than on ice, because the Arctic is melting.

Beavers, on the other hand, are benefiting from the melting ice by moving farther north and building new dams.

Read More: 3 Reasons Climate Change Is Real, Even Though It's Cold

Coral reefs are the starkest example of this, which are failing around the world because of warming ocean temperatures.

The sharks freezing to death in Cape Cod Bay further show that animals, like humans, struggle in extreme conditions.

Global Citizen campaigns on the Global Goals, which call for protecting life on land in water. You can take action on this issue here.