Inspiration to keep smiling in the face of hatred. 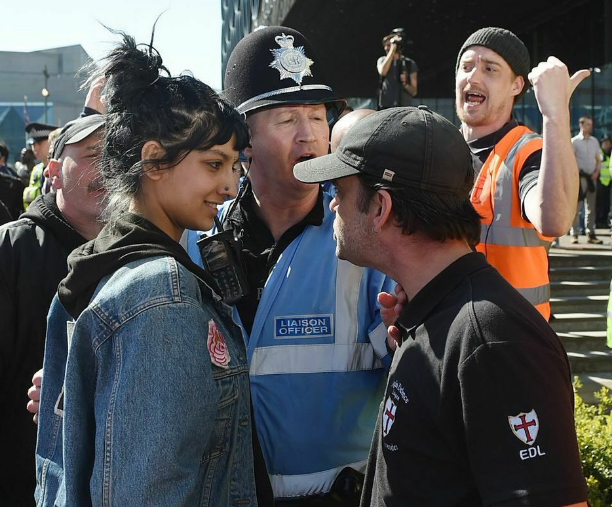 An image of Saffiyah Khan, a young woman from Birmingham, made waves as it reminded the world of the power of peaceful resistance in the face of grotesque hatred. Stepping into a circle of supporters from the English Defence League to defend a woman wearing a hijab, her expression is rebellious and dignified at the same time. Laidback and seemingly happy — everything the EDL assumes Muslim women not to be — her smile and her stance are the ultimate revenge to the pillar of rage in front her.

Captured by photographer Joe Giddens, in her denim jacket and Specials t-shirt, Saffiyah has become a symbol of resistance in the 21st century (let’s hope Pepsi have learned their lesson). The moment it has immortalised is powerful in itself, representing the clash between a multicultural and a racist vision, but also because it offers a refreshing picture of a human being who simply has no more time for bigotry. It’s a reminder that hatred shrinks in the face of true humanity.

Read More: This Woman Stared Down a Far-Right Racist With the Ultimate Act of Defiance

It goes without saying that the internet swelled with hope at the viral photo. After Twitter user @_Xas_ launched a thread labelled "Just a a wee thread of women who truly don't have any time for your sh*t," the Twittersphere responded in kind. Here's a selection of iconic women like Khan who have chosen to step out and bravely stand their ground.

Just a wee thread of women who truly don't have any time for your shit.

42-year-old Tess Asplund marched to face off 300 members of the Nordic Resistance Movement in 2016, an avowedly anti-Semitic and racist movement. “It was an impulse. I was so angry, I just went out into the street,” Asplund told the Guardian. “I was thinking: hell no, they can’t march here! I had this adrenaline. No Nazi is going to march here, it’s not okay.”

In tribute to her courage, she was named one of the BBC’s 100 Most Inspiring Women in 2016

2/ Jasmin Golubovska Fighting the Ugly Side of Power

During a protest in Macedonia over allegations that the prime minister hid the circumstances around the death of a 22-year-old, Jasmin Golubovska’s stared straight into a policeman’s shield to… apply some lipstick. In an interview about the image that spread worldwide, she said: "In principle I do not use a lot of make-up, I wear red lipstick only when I need to repair the tired look of the systemic suppression of freedom" — an original response to the ugliness of oppression.

Ciara was just 8 years old when she appeared in this photo on the occasion of a visit from Nicola Sturgeon before the Independence referendum in Scotland. To celebrate her boldness, a Just Giving campaign raised £500 for her 10th birthday.

4/ The Woman with the Eagle Feather

During an intense protest against potential fracking near Elsipogtog First Nation in New Brunswick, Canada, 28-year-old Amanda Polchies dropped to her knees in front of a wall of heavily armed police, raised a feather and began to pray.

The image was shared more than 160,000 times in four hours, and became a symbol of the ongoing battle for Native rights over their home territories.

Read More: Native Girls Rise — How a Generation of Native Women Are Standing Up and Fighting Back

After a video emerged of an Israeli police officer beating up a soldier of Ethiopian origin, thousands of Ethiopian-Israelis took to the streets of Tel Aviv to protest police brutality. More than 135,000 Ethiopian Jews live in Israel, but integration is a continuous challenge.

Captured during the #BlackLivesMatter protest in Baton Rouge after the death of Alton Sterling, this image of Iesha L. Evans was celebrated around the world as a symbol of grace and resilience in the face of police brutality. Shortly after the photograph was taken, Evans was arrested, but she did not regret her actions, stating: “this is the work of God. I am a vessel.”

Despite protests from conservative sections of society, gay marriage was made legal in France in 2013. However, those still opposed to the law see the upcoming election as an opportunity to repeal it. Far-right candidate Marine Le Pen has been accused of burying a pledge to  repeal same-sex marriage in her manifesto,  although she has received high-profile support from some members of the LGBT community. Whatever the results, the ongoing dispute is a reminder to persist.

8/ A Palestinian Girl Who Just Wanted to Go to School

In this devastating photo, a Palestinian schoolgirl walks past Israeli border police officers on her way home from school — a powerful reminder of the conflicts that prevent 75 million children worldwide from completing their education.

Read More: Millions of Kids Are Stranded Without an Education

A visual reminder of the power of resistance — these images capture the courage and radical charm of a person who stands her ground.