Rohingya Refugees Are Bringing Solar Panels With Them as They Flee

“This solar panel saved my life."

When Rohingya refugees began arriving in Bangladesh, after violence erupted in Myanmar’s northern Rakhine State in August, local residents were puzzled to see some toting small solar panels on their shoulders.

“When we saw they were carrying a solar panel with them, I was surprised. I would never do this in such a situation,” Jashim Uddin, a tea stall owner in Ukhiya, in Bangladesh’s Cox’s Bazar, told the Thomson Reuters Foundation.

Main Uddin, a government official in charge of Ukhiya sub-district during the Rohingya exodus, said the panels were being carried in despite the sound of gunfire on the border and reports of landmines.

Take Action: Show Your Support for All People - No Matter Where They Were Born

More than 600,000 Rohingya Muslims have fled to Bangladesh from Myanmar’s northern Rakhine State since August, when the Myanmar army launched a crackdown following attacks on police posts and an army base by Muslim militants.

Many reported making an arduous trek lasting between 5 and 15 days along hilly and waterlogged roads – but the hazardous journey did not prevent many of them from carrying a solar panel with them.

“This solar panel saved my life,” said Ayatullah, 18, once a shopkeeper in Myanmar’s Mongdu township and now a resident of the Thaingkhali refugee camp in Bangladesh.

He said he had to take care to avoid Myanmar’s army when he fled the country.

“They were killing everyone they came across. We had to depend on information from our people about the safe route, and a mobile phone was needed for that. This solar panel helped us to charge the mobile phone,” he said.

A top United Nations human rights official said last week that Myanmar’s security forces may be guilty of genocide against the Rohingya.

Read More: Timeline: How the Rohingya Crisis Unfolded in Myanmar

Ayatulla said that he only brought some clothing to Bangladesh, beside the solar panel. “I thought even if I could not take anything, I must take the solar panel,” he said.

Interviews by the Thomson Reuters Foundation with more than 50 Rohingya refugees in Balukhali and Thaingkhali camps in Ukhiya, and observations of refugee households in the camps, suggest large numbers of refugee families brought solar panels with them.

Refugees used the panels, each the size of a laptop computer and fitted with a battery and a small light, to charge mobile phones and provide light at night on the hilly jungle roads on their way to Bangladesh, they said.

Many said they also thought that the panels would also come in useful if they had to live on the streets in Bangladesh.

Rashida Begum, 45, from Napura village near Mongdu, made the five-day walk to Bangladesh with three sons and three daughters, bringing a solar panel but no other belongings.

“This helped me a lot while we stayed in the jungle at night. Without this solar panel, we might not (have reached) Bangladesh,” she said. “It was a difficult thing for me to carry this, but I did it thinking it would be useful for me.”

Mohammad Yaser, a refugee from Kearipara, near Mongdu, said many rural areas of Rakhine State lack grid electricity connections. Most families used solar panels for lighting at night and other daily activities, while others used candles or kerosene lamps.

Yaser said that solar panels were cheaper in Myanmar than in Bangladesh, with a 20-watt panel costing 20,000 kyat (about $15). In Bangladesh, an equivalent panel costs 8 to 12 times as much.

Many of the Rohingya refugees said that they knew about this price difference and it was another reason to bring their panels with them. Security concerns also were a worry.

“When we arrived in Bangladesh, we had to stay on the street for the first few days. We powered lights with solar panel during that time and the light made us feel safe,” said Abdur Jaher, 45, from Maungdu township in Myanmar, who fled with his wife and their five children. 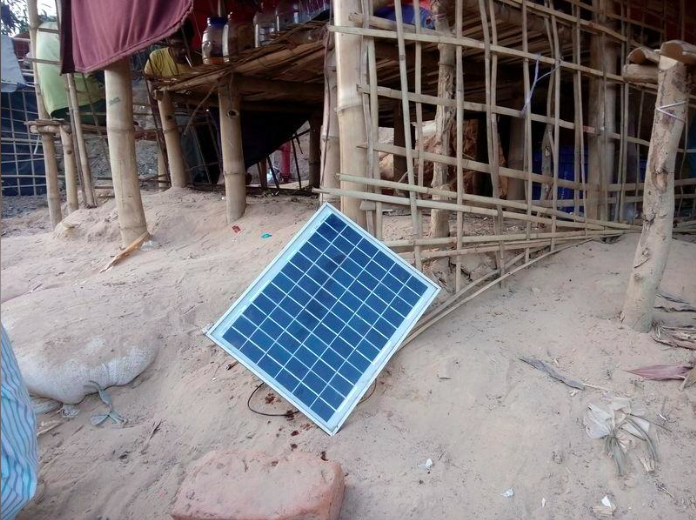 At the Rohingya refugee camps in Bangladesh, there is no grid electricity connection. Refugees use solar panels, candles and kerosene lamps for light at night.

The Bangladeshi government also has provided 500 solar-powered street lights and 2,000 home system solar panels for the camps, and solar power is also used for wells and water purification systems.

The International Organization for Migration, a United Nations organization, similarly is using solar power to provide medical support to refugees in Kutupalong and Balukhali camps, with services available 24 hours a day.

UNHCR, the United Nations refugee agency, said on December 7 that Rohingyas were continuing to come to Bangladesh even though both Bangladesh and Myanmar had set up a timetable to allow them to return home. UNHCR said around 1,500 had arrived the previous week.

The refugees have reported fleeing mass killings, rape and arson attacks against them.