Muhammed Muheisen
Why Global Citizens Should Care
The UN’s Global Goals can’t be achieved without taking into account the rights and needs of refugees, internally displaced people, and stateless people. The work of people like Muhammed Muheisen is important because, by documenting the crisis, they make it so much harder for world leaders to turn their backs. You can join us by taking action here to stand with refugees.

Muhammed Muheisen was born and raised in Jerusalem against a background of the Israeli-Palestinian conflict.

But spending his childhood in a conflict zone has shaped his view of the world and, as a photographer, has had a profound influence on his work.

“I remember there was always space for fun as a child, so whenever I go to other conflict zones, that’s what I see,” he told Global Citizen over the phone from his temporary base in Greece.

“It’s what I look for — I find my camera always pointed at that kind of photography because it exists,” he says. “There is two sides to the story. You can have a funeral on the right and you can have a child, a baby just been born, on your left.”

Take action: Refugee? Migrant? Human Being. Show Your Support for All People — No Matter Where They Were Born 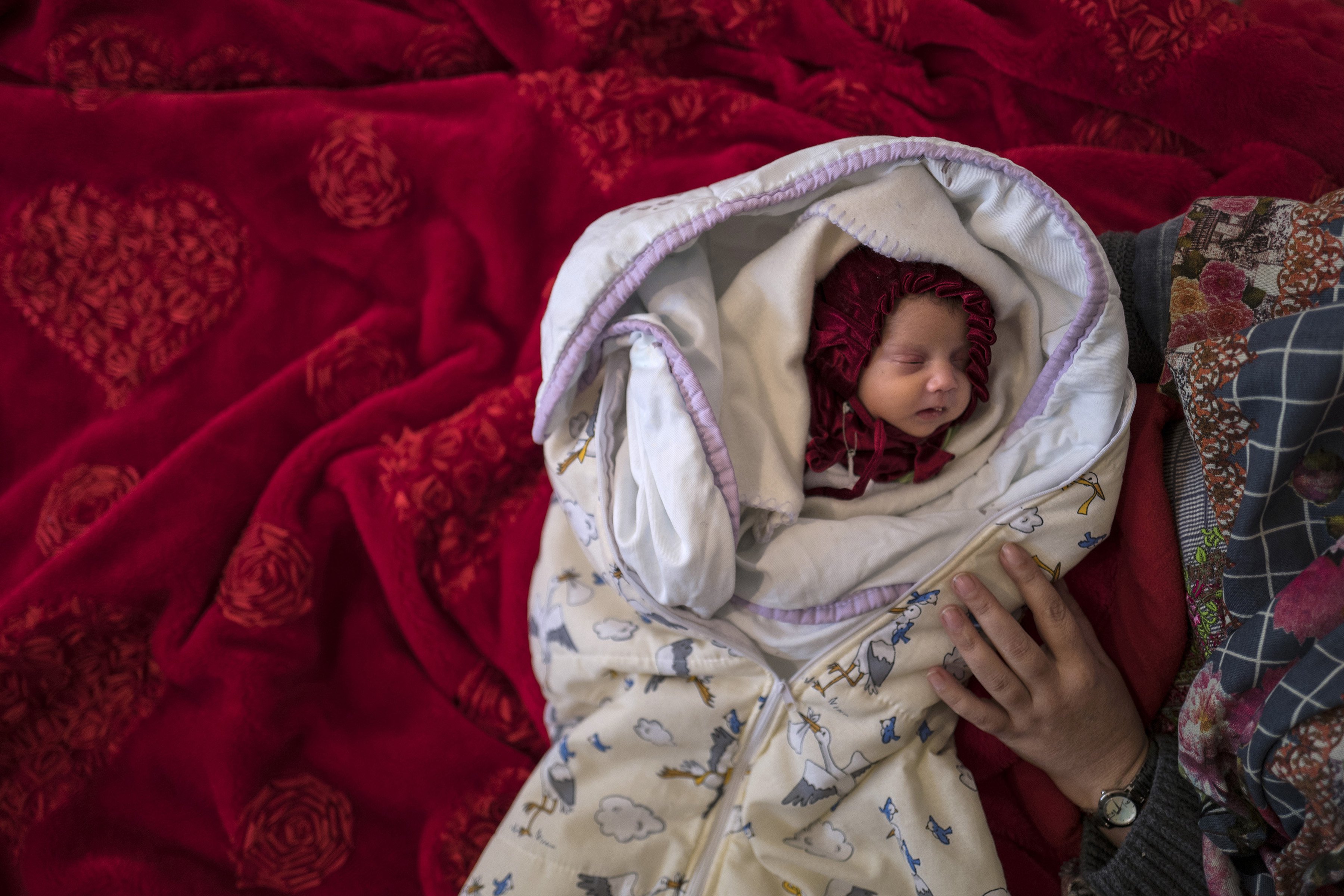 25-day-old premature Afghan refugee infant Aliah lies on a bed with her mother in a camp near the Croatian border in Serbia.
Image: Muhammed Muheisen

Muheisen, who has won two Pulitzer Prizes for his photojournalism, among other international awards, has spent over 10 years focusing exclusively on documenting the stories of refugees and internally displaced people.

While his work has taken him all over the world, from the Middle East to the United States, Asia, and Africa, he now focuses his work almost entirely in Europe because that's where "these millions of people came."

“Nobody leaves their home unless they’re forced to leave their home, and that’s what I try to show in my images,” he continues. “I technically just show daily lives and the challenges refugees face. And I try to put names and ages because they’re not only refugees and numbers, you know, they are people.”

“For me, it’s a story of the people,” he says. “Because if you ask yourself the questions, the word refugee, we always use the word refugee, but behind the word there is people. There is men, and women, and children. And I was born and raised in a conflict region, and I always remember this unsteady feeling, so it’s so important to document these stories, of the people.” 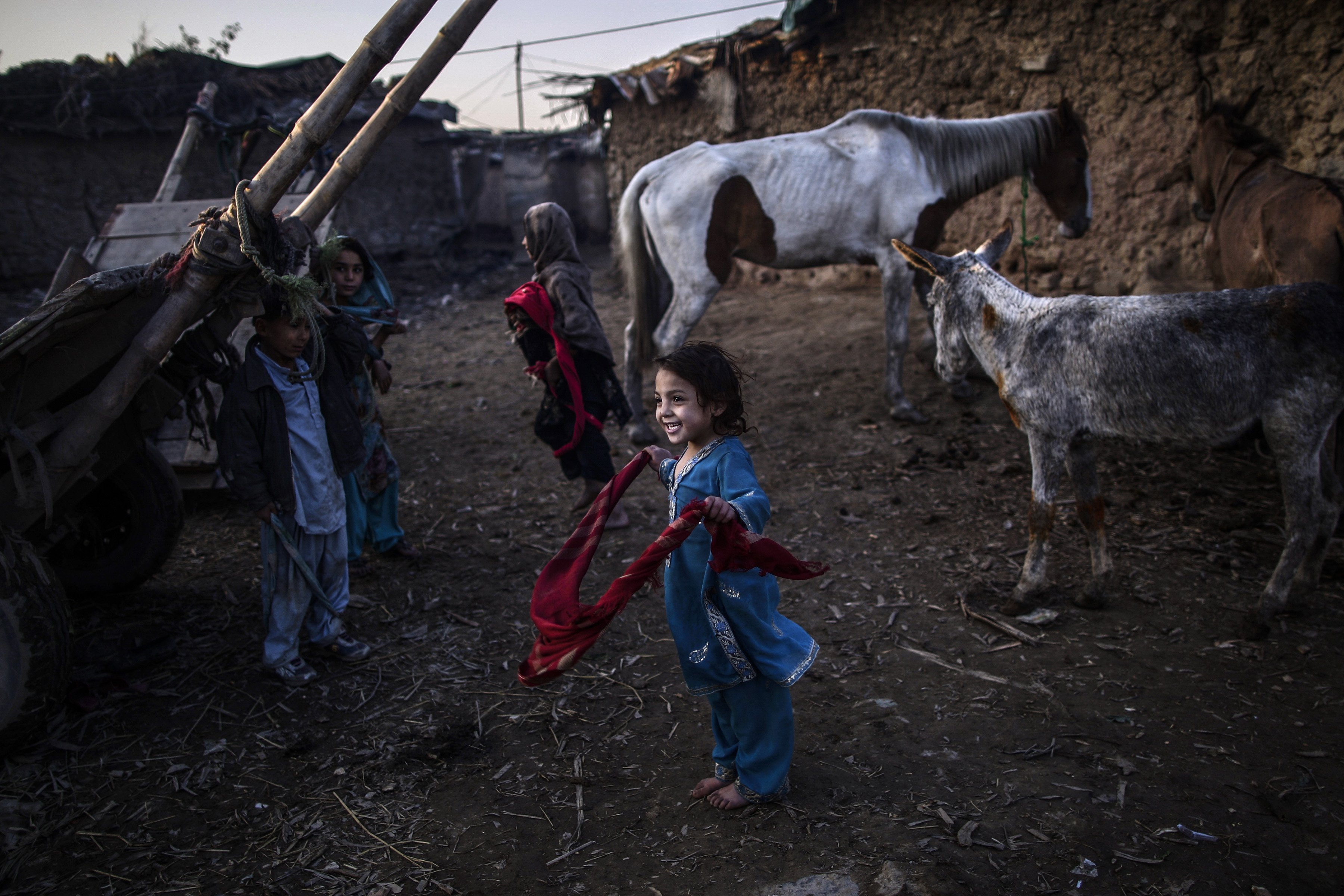 An Afghan refugee girl skips using her headscarf in a poor neighborhood on the outskirts of Islamabad, Pakistan.
Image: Muhammed Muheisen

Muheisen mostly focus on children, because children "are the real victims of conflict," he says. "They don’t get to choose where to be born, or the circumstances surrounding them. Children all over are the same, they just want to be happy and have fun."

Muheisen’s images all speak of hope, they show how people cope, and how people dream. The subject of his photograph will be a child playing with a balloon in Afghanistan, for example, or a little boy playing with bubbles, with his back to the refugee camp and his eyes on the sky.

“It’s not easy, you know, but at the end of the day, we’re the lucky ones,” he says. “We go back home, we have a roof, we have a bed, and they are the ones who left their house. So whoever asks me a question, 'How do you feel covering all that, you should be traumatised?' I say, I’m not the one who’s living that, in the scene. I’m only the messenger.” 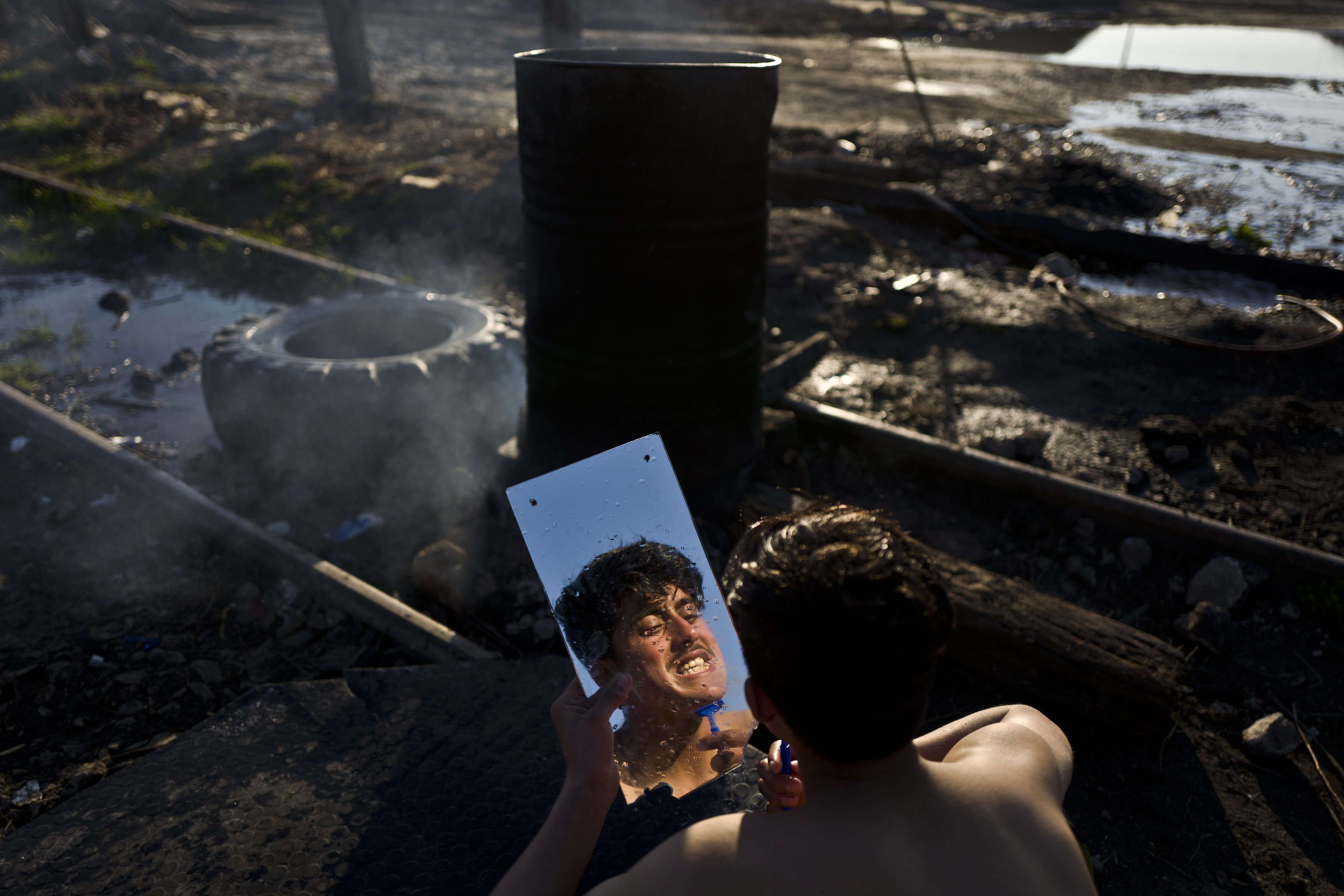 15-year-old unaccompanied refugee minor Inamullah Mohammed, a refugee from from Jalalabad, Afghanistan, holds a mirror while shaving his beard on a railway track where he and other refugees took refuge in Belgrade, Serbia.
Image: Muhammed Muheisen

“I like to portray people with pride. They trusted me, they respected me, the least I can do is show their pride,” he continues. “Show their picture, never invade their privacy. And this is happening, you know, it’s not like this scene doesn’t exist. It exists, so simply I just document it.”

“If it’s in Jordan, or Greece, or Afghanistan, or Pakistan, it’s a picture that you can connect to,” he says. “That it can happen anywhere else in the world. And that’s the power of photography, we tell stories, we document things, for now, for tomorrow, or for the coming generations. To learn, to understand what happened.”

It’s this focus on the everyday, the fact that life goes on and never stops, even when you’re caught up in a refugee crisis, that led Muheisen to found the Everyday Refugee Foundation. Its focus is on helping refugees and internally-displaced people, whether from war, natural disasters, discrimination, or poverty.

A Dutch NGO, the Everyday Refugee Foundation was launched by Muheisen to share the stories of the daily lives of refugees and people who have been displaced, their struggles, and the “little sparks of hope that remain, despite their circumstances.” 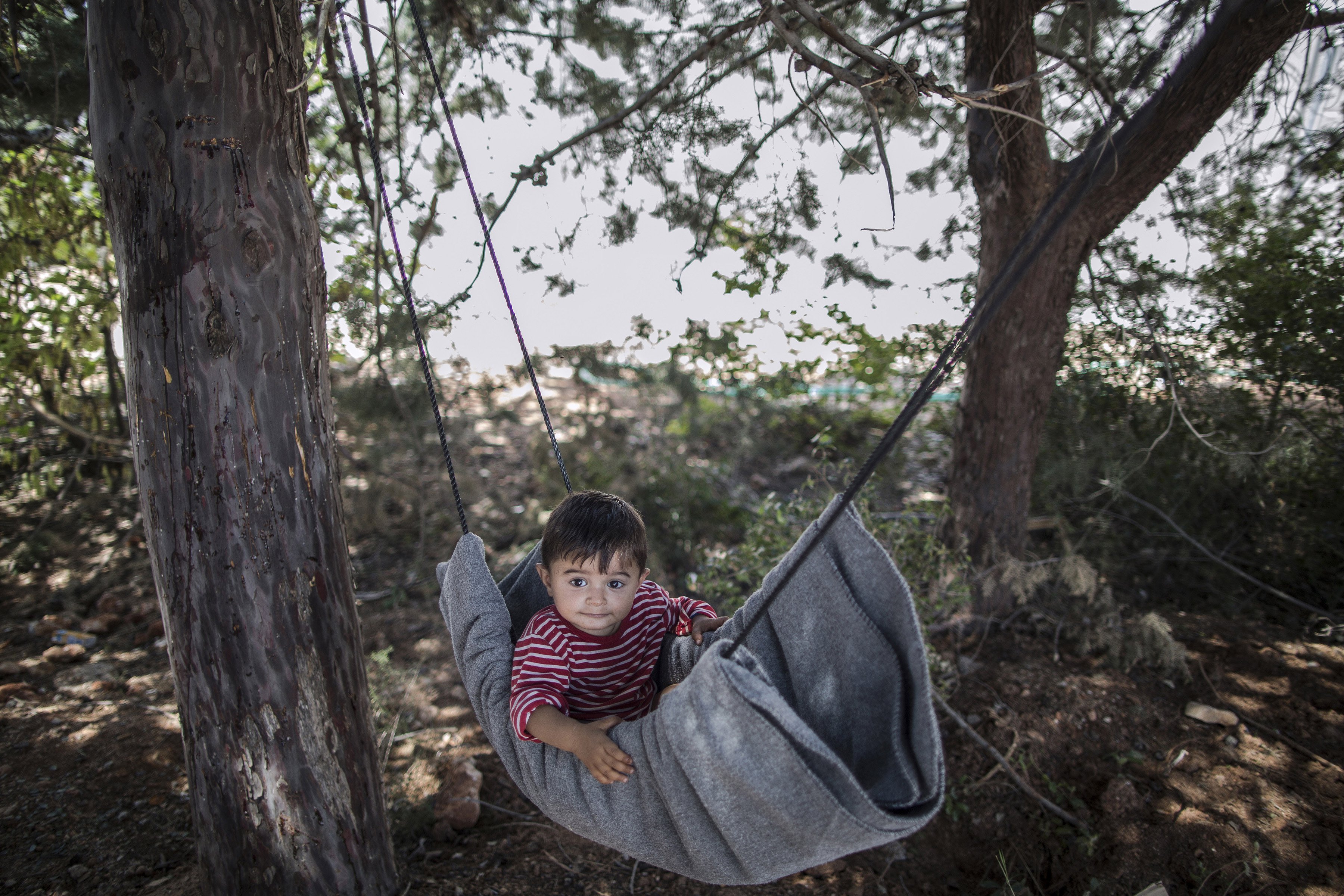 14-month old Syrian refugee Hassan Khalil plays on a makeshift hammock attached to a tree, next to his parents in a refugee camp north of Athens, Greece.
Image: Muhammed Muheisen

But it also supports people by empowering them and improving their self-reliance, through supporting projects such as building schools, giving photography workshops, and donating clothes, foods, and other supplies to support them in building their future.

The organisation also stays involved with refugees after they receive asylum, or reach a place of safety, by offering language courses and training in other essential skills to help speed up their integration process.

“Whoever comes to me and asks me, 'how can I help?' I always say, by recognising the issue, you already helped,” continues Muheisen. “The knowledge, because sometimes it’s easy to turn your back and say, it’s none of my business. But the fact that you recognise that there are people who need your help, you already helped.” 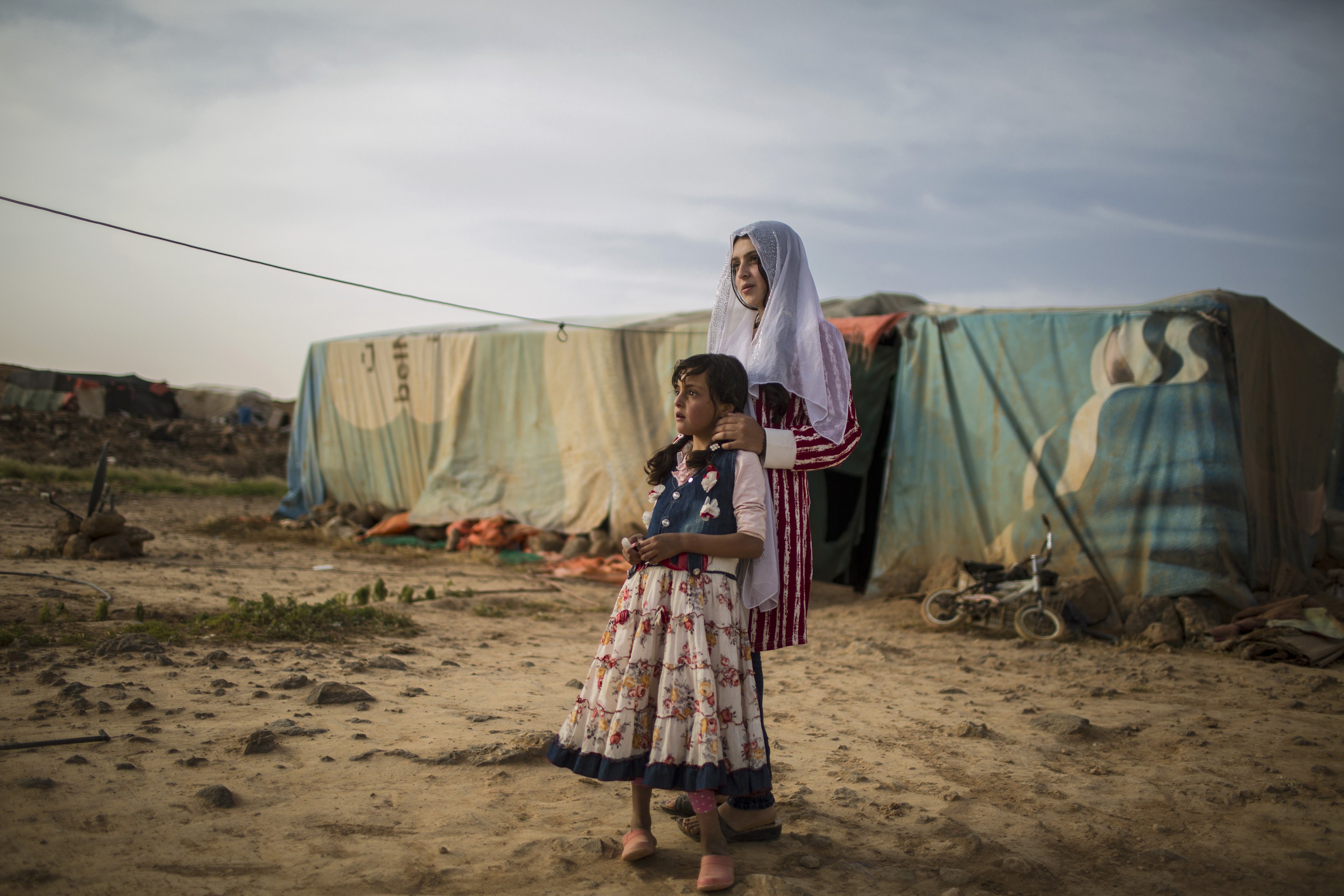 Zahra Mahmoud, a seven-year-old Syrian refugee from Deir ez-Zor, Syria, is held by her 13-year-old sister Fatimah outside their uncle's tent, in an informal tented settlement in Jordan.
Image: Muhammed Muheisen

Muheisen’s photography has brought him a long way from the 8-year-old he was when he first “fell in love” with his grandmother’s Polaroid.

“I was just amazed how you press a button and a picture comes out, documenting that exact moment,” he says. “And you put it in your pocket and it lives. So it became my new toy, my new passion, I fell in love with trees and street light and I didn’t imagine I’d be driven into this kind of photography.”

But, for Muheisen, photography is a very powerful tool to help in spreading awareness, and closing the gap between countries and between people. 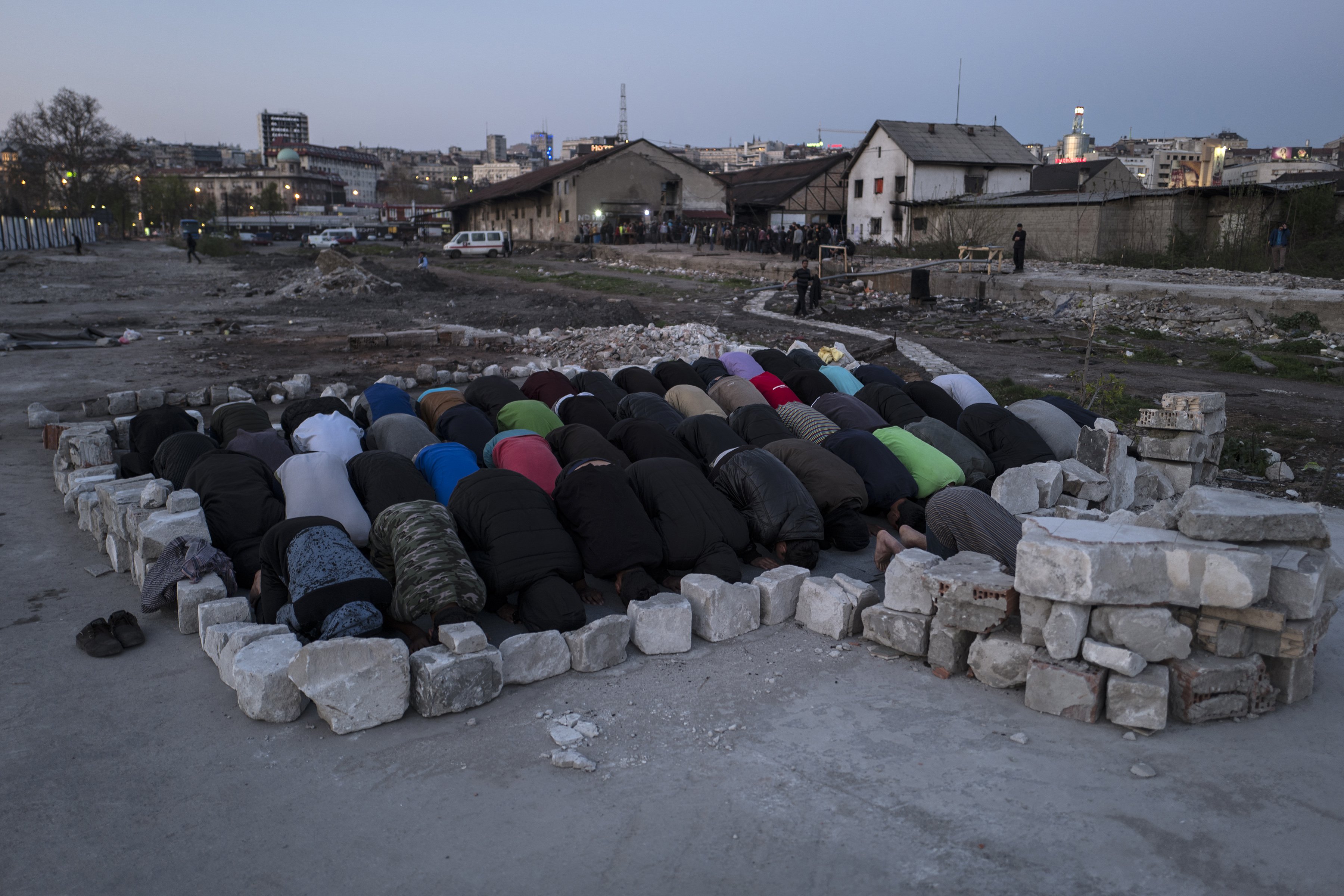 Unaccompanied refugee minors and older refugees offer evening prayers, known as Maghrib, when the sun has completely set, in a makeshift mosque set up outside an abandoned warehouse where they took refuge in Belgrade, Serbia.
Image: Muhammed Muheisen

“I believe through photography we can make a difference, because right now with the social media our reach is open to the public,” he continues. “You can reach anybody at any spot in the world … and I like to use this tool in a very positive way, to tell people what’s happening in the other part of the world.”

“Maybe it won’t help everybody, or help a large number, but at least we are able to help some people,” he says. “And that’s simply through photography … It’s so important to document things, because if we don’t document it it never happened, right. Nobody will learn about it, nobody will come and say I want to help, nobody. So now we can make a difference. Big or small, at least we start somewhere.”

On the Frontlines is a new series that brings Global Citizens to the front lines of the work your actions support around the world. In it, aid workers, health and education professionals, gender equality activists, scientists, and other individuals making a difference on-the-ground tell their stories and provide an in-depth look at how to address some of the world's greatest challenges.