'Women Could Save The World': Pharrell Williams Shows His Feminist Side in Interview 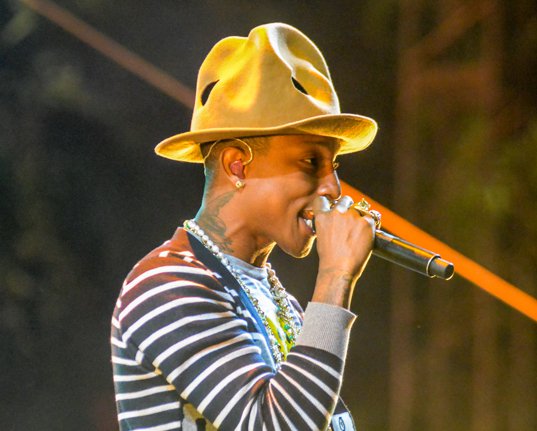 By Shawn Ahmed via Wikimedia Commons

Pharrell Williams loves women. In 2014, he released chart-topping album G I R L, a “21st century take on feminism,” a record launched into the stratosphere with galactic hit “Happy.” He’s made music with almost every heroine in pop: from Beyonce to Britney, Miley to Madonna. Now, he’s produced and written the soundtrack for recently released Oscar-tease "Hidden Figures," a film that unravels the untold true story of three female African-American scientists who helped crunch data with NASA to put the first American astronaut into orbit.

#HiddenFigures is out today! See the film, be inspired, and let your brilliance shine in the coming year! pic.twitter.com/rGsWZuVRuc

Hidden Figures, featuring Janelle Monae, Taraji P. Henson, and Octavia Spencer, beat "La La Land" to fly to No. 1 at the US box office last weekend; a triumph that coincided with Martin Luther King Day. Already, the film is touted to get lucky with Academy Award nominations next week. In a new interview with Esquire, taken while on the campaign trail supporting Hillary Clinton, Williams opened up about gender equality, politics, and the art of listening.

"Women have a lot to carry, right? Including the entire human species,” Williams said, “and still they don't have an equal say on this planet. That's insane.”

For Williams, fronting a project like Hidden Figures was a clear sign of how he wants to move forward with his art: it’s all about allowing space, noise, and clarity to amplify a story about strong, intelligent women that had previously gone unheard. It’s far from the glorification of women in the male gaze that has previously defined some of  his work. Hidden Figures’ Katherine G. Johnson, Dorothy Vaughan, and Mary Jackson are not just impressive characters; they are powerful women with a real, inspiring story to tell.

Read More: Surprise! Men Are Still Paid More Than Women in the UK

"The female contribution to anything significant has always been historically dismissed or discounted, or often erased," Williams continues. "Their feelings are suppressed, their spirits are oppressed, and their ambitions are repressed."

When Williams last performed at London’s O2 Arena, he spoke out against the gender pay gap for American women. More recently, on the Ellen DeGeneres Show, he again used his platform to underline the key point of the film he helped produce: female success is still considered less impressive. “Still to this day, the female achievement goes mostly ignored and overlooked” he said. “That’s something we need to change.

Thank you, @Pharrell, for standing up for kindness and acceptance and love. pic.twitter.com/Y8aom61Akl

Previously, Williams has ran into hot water on the topic of gender equality. The track he penned with Robin Thicke was maybe the nadir, still suspended in press purgatory by the ongoing plagiarism case with the estate of Marvin Gaye. In 2013, over 20 UK student unions banned the song from their campus’ after allegations of misogynistic lyrics. Williams wrote the vast majority of it, but in comparison to the vilified Thicke, permanently cast aside as a pantomime villain, he survived every critical blow.

Now, Williams has a clear focus: to use his prominent position to let the fight against sexism sing. There’s a tangible appetite for a movie like "Hidden Figures," a sure sign that things are getting better. Pharrell isn’t perfect. But neither is the fight itself. It’s long, gruelling, and needs everyday support from all corners of society to succeed. It’s going to be a tough year ahead for feminism. Let’s celebrate every new soldier we can get.

Watch the new trailer for #HiddenFIgures🚀 and pre-order the official soundtrack on @AppleMusic now! https://t.co/yRpXh3ubUJpic.twitter.com/eEQbOudsYN