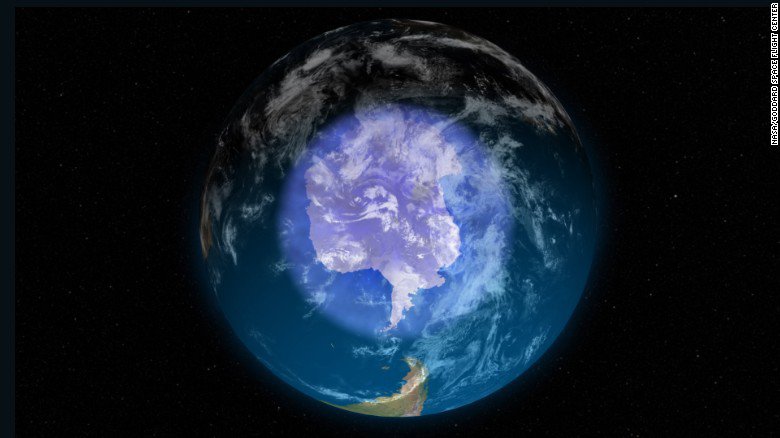 Scientists have confirmed that the hole in the ozone has been steadily shrinking following the historic United Nations treaty — the Montreal Protocol —  to ban chlorofluorocarbons, or CFCs, in 1989.

The fact that the ozone is healing at all is a powerful testament to what can be achieved if the whole world comes together and every country sticks to its word. The Montreal Protocol was the first time that the UN unanimously ratified a treaty and it gives scientists hope that a similar compromise can be achieved on climate change.

Back in the early 20th century, CFCs were introduced as an alternative to toxic substances like ammonia. They started to be used in common household amenities like refrigerators and air conditioners.

Read more: A Tiny Island is Showing the World how to Protect Our Oceans

CFCs, it was eventually learned, are dangerous in their own way. While not posing a direct threat to humans, they are hazardous to the ozone.

Chlorine is a naturally occurring substance, but it never rises that high in the atmosphere on its own because it dissolves into water.

When part of CFC, chlorine can rise into the atmosphere. Once up there, ultraviolet light breaks down the compound and separates the chlorine, which goes to devastate the ozone by reacting with other substances.

When it was learned that the ozone was rapidly deteriorating — mostly following the rise of air conditioners — the culprit was soon identified as CFCs.

Scientists moved to ban and eliminate CFCs from use and the world listened. In less than four years, the entire UN agreed that CFCs were not worth the destruction of the ozone and began to phase them out.

Why is the ozone important? The ozone layer blocks ultraviolet radiation from reaching the Earth’s surface where it would be harmful and all life on Earth. It essentially acts like a big shield.

Since then, the ozone has been on a steady recovery.

Read more: Norway Commits to Zero Deforestation--the 1st Country to Do So

The biggest hole exists above the Antarctic because the coldness causes more clouds to form there. The chlorine collects in clouds where it can more efficiently destroy the ozone.

The ozone hole has been closing at a rate of about 20 square kilometers per year since 2000. There was one slip in 2015 because a volcanic eruption released hazardous chemicals into the air.

Overall, however, the trajectory has been good and scientists are hoping to use the template of the Montreal Protocol to address the myriad causes of climate change.

Climate change is a far more complex problem than stopping the ozone’s depletion, but it can be done if the world acts with similar resolve.

The Paris Climate Agreement was a step in the right direction, but a lot more will have to be done to put the brakes on climate change.