Non-electric cars will be phased out from 2020. 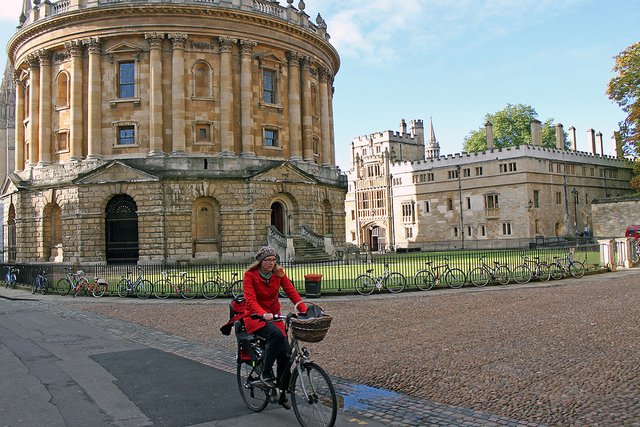 Oxford loves making history. It’s the city where Radiohead first met, it’s got its own comma, and it’s the new home of Malala Yousafzai.

Now, Oxford’s history is going green — as its council has announced plans to make its city centre the “world’s first zero-emissions zone”.

Oxford set to be FIRST PLACE IN THE UK to ban petrol + diesel vehicles from city centre. Public consultation to come https://t.co/6KjiPmtkVWpic.twitter.com/zVsNJE5nfV

Plans set out by Oxford city council and Oxfordshire county council show it will phase out petrol and diesel cars in six streets in the city centre from 2020.

The zero-emissions zone will cover all non-electric vehicles across the entire city centre by 2035, cutting harmful levels of the pollutant nitrogen dioxide by up to 75%.

The scheme to replace the city’s fossil fuel powered cars will cost £7 million, with an additional £7 million for administration costs and CCTV cameras to enforce the ban. Those who break the rules will likely receive a fine, according to the Independent.

Oxford could get the world's first zero emission zone - banning petrol and diesel vehicles from the city centre.

“Toxic and illegal air pollution in the city centre is damaging the health of Oxford’s residents,” said John Tanner, a councillor from Oxford city council. “A step change is urgently needed; the zero emissions zone is that step change.”

“All of us who drive or use petrol or diesel vehicles through Oxford are contributing to the city’s toxic air,” he added. “Everyone needs to do their bit, from national government and local authorities, to businesses and residents, to end this public health emergency.”

Oxford has already been awarded two grants of £500,000 and £800,000 to install charging points for electric taxis and residents’ electric cars respectively, according to the Guardian. Other schemes up for consideration include reduced parking fees for electric vehicles, electric taxi-only ranks, and electric delivery vehicle-only loading areas.

The UK has pledged to ban all petrol and diesel cars by 2040 as part of a £3 billion plan to tackle air pollution — after a previous plan was branded “weak” and “woefully inadequate” by environmental lawyers because it "passed the buck" to local authorities. Critics claimed it failed to provide suffienct detail in its plan to tackle illegal air toxicity, and didn't address the problem of diesel engines.

Opponents to the government's latest move say that the new promise to scrap petrol and diesel cars is just a “smokescreen” to avoid quicker solutions to address the claim from the Royal College of Physicians that 40,000 Britons die prematurely every year due to air pollution. They argue that the newest plan lacks ambition.

Global Citizen campaigns to achieve the Global Goals, including Global Goal 11 on sustainable cities and communities. You can take action here.