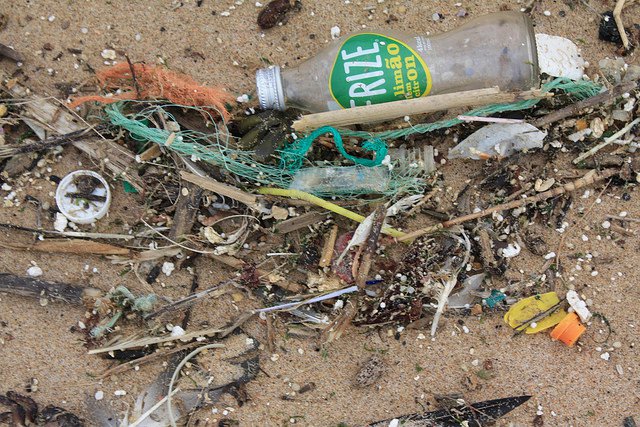 A volunteer-led survey found that nearly three quarters of 279 British beaches were littered with plastic “nurdles”.

According to the BBC, 600 volunteers hit the beach up and down the country on a cold weekend in early February to collect data for The Great Winter Nurdle Hunt survey — no suncream required. In Cornwall, volunteers found 127,500 nurdles within a 100 metre stretch of beach.

Results from the Great Winter Nurdle Hunt. One volunteer found 425 nurdles in 35 minutes in a 2.5 sq ft patch! pic.twitter.com/XWQusjcieA

It’s estimated that 53 billion nurdles escape into the UK environment every single year, whilst 230,000 tonnes enter the oceans around Europe.

Read More: In Win for the Earth, Microbeads Will Be Banned in the UK By 2017

Nurdles are tiny plastic pellets used as raw materials in the production of larger plastic products. They are a primary source of microplastics, which are little pieces of plastic that escape into the sea and cause damage to wildlife. They soak up dangerous chemicals whilst on the move, and can be toxic to wildlife, like birds and fish, that eat them by accident.

The findings will be be passed to the government as part of a wider study into microplastics. Madeleine Berg, projects officer at Fidra, a Scottish charity that helped set up the survey, was keen to emphasise how public backing can influence policy in comments made to the Guardian.

“The information we’ve gathered will be vital to show the government that pellets are found on beaches all around the UK and, importantly, that so many people care about the issue,” she said. “Simple precautionary measures can help spillages and ensure nurdles do not end up in our environment. We are asking the government to ensure best practice is in place along the full plastic supply chain, and any further nurdle pollution is stopped.”

The results of the survey comes on the back of a triumphant week in the fight against microplastics. Multinational corporation Johnson & Johnson have announced that they will stop using plastics in the production of cotton buds, instead using paper to cut down on waste.

Just some of the #cottonbuds on the beach, along with 1000s of #nurdles - couldn't pick them all up, even over a few hours with 5 of us! pic.twitter.com/PAbwqueua7

According to the Marine Conservation Society, cotton buds were the sixth most common litter found on British beaches last year. The change in policy will affect half the countries on the planet, in a major step forward against marine pollution.

Tiny plastic pellets may not seem too threatening on first look. But, in their billions, they can cause irreparable harm to the environment. Microplastics can affect human beings too; one study found that more than a quarter of fish in a Californian market contained traces of plastic. Once microplastics reach the environment, they should be considered toxic. Nurdles may be small, but they present a very large problem.