Many NTDs have been eliminated across the world, but millions of children remain at risk.

When people think of obstacles that impact children’s education, many consider the immediate challenges: cost of supplies, tuition, uniforms, overcrowded schools, and overburdened teachers, maybe even the physical distance between homes and schools in underserved areas.

But these interferences pale in comparison to the barriers presented to sick children living in vulnerable populations.

Sometimes forgotten are the devastating diseases that prevent children from accessing school at all.

As if vicious health effects and stigma weren’t punishing enough for a child, lack of access to quality education pushes them further behind their peers, limiting their opportunities for economic success later in life, which in turn reinforces the cycle of poverty — driving home the overarching and debilitating impact disease can have on children.

Yes, these pictures are disturbing. But the diseases that disfigure people like this can be stopped. Here’s how: https://t.co/TnIZewhlg1pic.twitter.com/N8vbsvGTBJ

The majority of neglected tropical diseases (NTDs) have been eliminated in most of the world, but millions of children remain at risk.

Some of the most common existing NTDs — that are controllable with mass drug administration — include: dracunculiasis (Guinea worm disease), a parasitic larvae that comes from drinking unfiltered water that lives in the body for about a year; lymphatic filariasis, an infection transmitted through mosquitoes that targets the lymphatic system and can result in severe disfigurement and swollen limbs; onchocerciasis (river blindness), an infection transmitted from black flies that causes skin lesions and can lead to blindness; and trachoma, a bacteria that’s the leading cause of blindness that causes the upper eyelids to turn inward, so that the eyelashes scrape and scar the cornea.

Many of these NTDs have all but disappeared in the developed world due to sanitation and hygiene standards. However, 100% of the world's low-income countries are still affected by at least five NTDs at a time.

Some NTDs not only physically prevent children from going to school, but also affect their learning capabilities. Schistosomiasis, for example, is a parasite that lives in freshwater snails and in contaminated freshwater. It can lead to anemia, malnutrition, and learning difficulties in children. School-aged children who swim in local freshwater lakes or ponds are most vulnerable. Once infected, it stunts a child’s ability to learn. 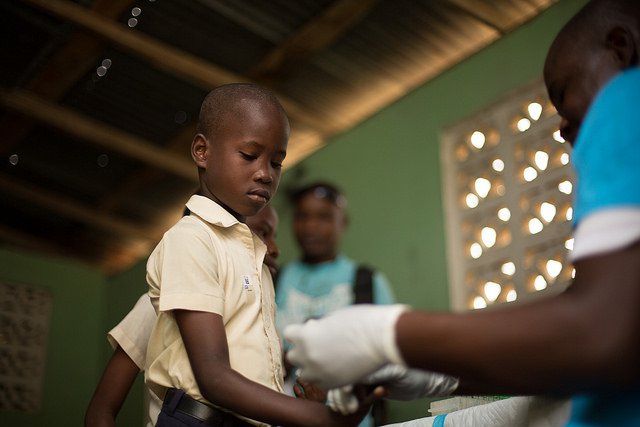 Luckily, the effects of schistosomiasis are generally reversible with treatment. The treatment, a drug called praziquantel, is safe and inexpensive, and can both treat children and prevent them from ever having to experience this NTD, according to the World Health Organization.

And it’s not just schistosomiasis that’s preventable. Research has shown that many of these conditions are preventable with medication — especially if it’s administered through schools.

Read More: These 7 Countries Eliminated a Neglected Tropical Disease in 2017 — and More Will Follow in 2018

In a study based in Kenya, school-based deworming programs have been shown to add a year to the average child’s education and reduce absenteeism by 25%. Not only was this program highly effective, but it was also inexpensive. The ingredients cost somewhere between 4 cents and 18 cents per annual dose. Even after adding the cost of delivery and administration, it was still only estimated to cost about $7.19 per annual dose. Given this data was based on a small-scale program delivered through an NGO, it’s likely to be even more cost-effective if delivered through a large-scale national or international program.

School directors and teachers play a very key role in the control of Schistosomiasis and STH especially in school-aged children, through their continuous support and assistance of field teams during parasitological surveys. @Sightsaverspic.twitter.com/I7O6mrlHfx

In the same 2012 report from the Abdul Latif Jameel Poverty Action Lab, researchers found that providing $100 worth of deworming programs extended childrens' time in school by 13.9 years.

Compared to other education-improving initiatives, such as providing free school uniforms, merit-based scholarships, and both unconditional and conditional cash transfers, $100 only helped increase time spent in school by a few months — not even a full year. In other words, $1 in NTD treatment goes further to keep a child in school than $1 in scholarship funding or subsidized uniforms, according to the Abdul Latif Jameel Poverty Action Lab report.

Read More: Why It's Critical That Women Lead the Fight Against Neglected Tropical Diseases

Eliminating NTDs is essential to improving children’s access to education. Close family members or parents becoming infected can indirectly impact a child’s education. Parents who develop a disability from NTDs might require children to withdraw from school to care for them and can then cause them to become infected themselves.

Total elimination of NTDs not only provides children with opportunities to further their education, but it benefits their health, both physically and mentally, for years after treatment.