At least 1.3 million meningitis C vaccines have been acquired to date. 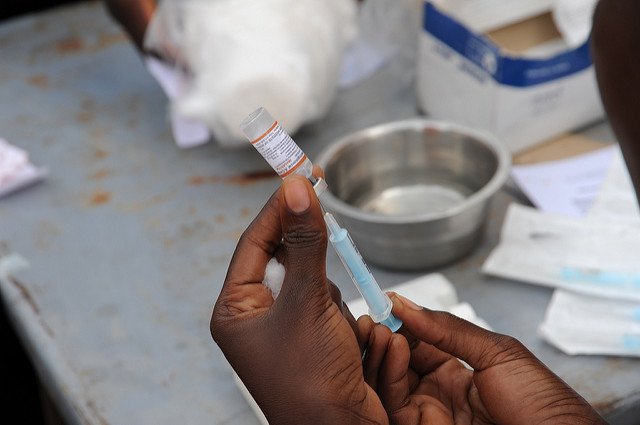 DAKAR, June 13 (Thomson Reuters Foundation) - Hit by one of its deadliest meningitis outbreaks in years, with more than 1,000 deaths, Nigeria could struggle to contain future epidemics due to a shortage of vaccines, health experts said.

Africa's most populous country has recorded about 14,500 suspected cases and at least 1,150 deaths so far this year - up from 33 in 2016 - in two thirds of its 36 states, said the Nigeria Centre for Disease Control (NCDC).

Nigeria in April launched a mass vaccination campaign in its northwestern states, yet there is a limited global supply of affordable and long-lasting vaccines for the C strain of meningitis, said medical charity Medecins Sans Frontieres (MSF).

At least 1.3 million meningitis C vaccines have been acquired to date, according to the government, yet aid agencies say several more million are needed to contain the outbreak.

Previous vaccination campaigns to protect against frequent meningitis A outbreaks - more than 2,000 people died in 2009 - have allowed the C strain to become dominant and spread widely among the unprotected population, said several health experts.

"This outbreak is not just one of the worst in number of cases and deaths, but in terms of how far it has spread across Nigeria," Miriam Alia, a vaccination and outbreak response adviser at MSF, told the Thomson Reuters Foundation by phone.

The shortage of vaccines for meningitis C means they can only be used to respond reactively to such outbreaks, rather than to prevent future epidemics in high risk areas, she added.

Meningitis is the inflammation of tissue surrounding the brain and spinal cord, which can be caused by viral or bacterial infections. It spreads mainly through kisses, sneezes and coughs, and symptoms include fever, headaches and vomiting.

The introduction of the MenAfriVac vaccine in 2010, costing just 50 U.S. cents a shot, means meningitis A is now rare across Africa's so-called "meningitis belt" from Senegal to Ethiopia.

Yet most vaccines currently used for meningitis C outbreaks in Africa are first generation vaccines which are in short supply as they are being phased out in other parts of the world.

Read More: The Top 10 Causes of Death for Children Around the World

The more effective and long-lasting vaccines against the C strain are pricier, and not readily available to respond to the epidemic in Nigeria, the World Health Organization (WHO) says.

"The very limited supply of vaccines to control outbreaks of meningitis C can affect our ability to control these epidemics," said Olivier Ronveaux, a meningitis expert with the WHO.

Vaccine maker Serum Institute of India is working on a vaccine targeting five meningitis strains, which could be available by 2020 and turn out to be a 'supervaccine' if effective and safe as MenAfriVac, health experts say.

But this means that laboratories are not going to produce many meningitis C vaccines, as they will only have a market for three years, leaving current stocks low, said Alia from MSF.

In the meantime, aid agencies are working to contain the current outbreak in a country where basic healthcare is limited in rural areas.

"We are also looking beyond the current outbreak, and learning lessons for future epidemics when it comes to aspects like the positioning of resources and case management," said Modibo Kassogue of the U.N. children's fund (UNICEF) in Nigeria.