In the past month, she has become a UN Ambassador, been considered for the Nobel, and won an award. 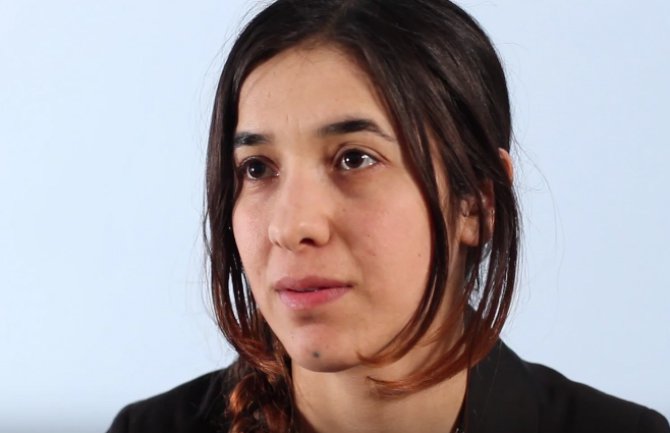 Though she didn’t win the Nobel Peace Prize this year, Yazidi refugee Nadia Murad was awarded the prestigious Vaclav Havel Human Rights Prize this week by the Council of Europe.

Murad was taken as a sex slave by the Islamic State when militants attacked the Yazidi people in the summer of 2014 in Iraq. She watched as her brothers were killed and then was held captive for months before being able to escape.

Since her escape, Murad has campaigned for Western countries to rescue her fellow Yazidis who remain captive and for countries to investigate and prosecute the Islamic States for its attack on the Yazidi people.

Read More: Nadia Murad Tells Her Story – How She Escaped Sex Slavery and Became an Activist for Yazidi Women

“We cannot have terrorist groups, barbarians, massacring whole peoples, destroying civilizations and cultures,” the 23-year-old said on Monday in her acceptance speech in Strasbourg, France. “Because all people must be able to determine their own lives and nobody should seek to impose their ideas on anyone else.”

“We need to have religious freedom, we must accept difference wherever it arises and we must make sure that all parliaments are aware of what happened to us,” she said.

Last month, she became a United Nations Goodwill Ambassador, and appeared at the UN with her attorney, Amal Clooney, where they urged countries to take the case of genocide to the International Criminal Court.

Murad had been “widely mentioned as a candidate for the Nobel Peace Prize,” the New York Times said today. The Nobel instead went to the president of Colombia, who brokered a peace deal bringing an end to a 50-years-long war with the FARC rebels. this year.

The Vaclav Havel Human Rights Prize  is given in honor of Vaclav Havel, a Czech writer and political dissident who became president of his country after the end of Communism, the Parliamentary Assembly of the Council of Europe announced.

“Through [Havel’s] writing and his political activity, he forewarned about the danger of hatred and prejudice, and the importance of tolerance, co-existence, and respect for human rights and the rule of law,” PACE President Pedro Agramunt said.

Murad also said in her speech she  would not =end her work speaking about what happened until other  “women in captivity go back to their lives, when my community has a place, when I see people accountable for their crimes,” according to the New York Times.

She called the ISIS attack on Yazidis a genocide and explained that girls as young as 8 were raped and made to be sex slaves, according to the report

The prize comes with a $66,000 award and hopefully a larger spotlight on her and Amal Clooney’s efforts to refer ISIS to International Criminal Court for its atrocious war crimes against the Yazidi people.