By Leah Rodriguez  and  Pia Gralki

The trip supported Room to Read and the Obama Foundation’s Girls Opportunity Alliance.

By Leah Rodriguez  and  Pia Gralki

Why Global Citizens Should Care
Global Goal 4 aims to ensure everyone has access to quality education. Education protects young girls against violence, exploitation, and poverty. You can join us and take action on this issue here.

A class of female students in southern Vietnam got the opportunity to share their school experiences with a group of powerful women.

The students in Long An province — located near the Mekong Delta, an hour’s drive outside of Ho Chi Minh City — opened up about the barriers to education that they face, including family pressure to earn money and cultural pressure to marry young. 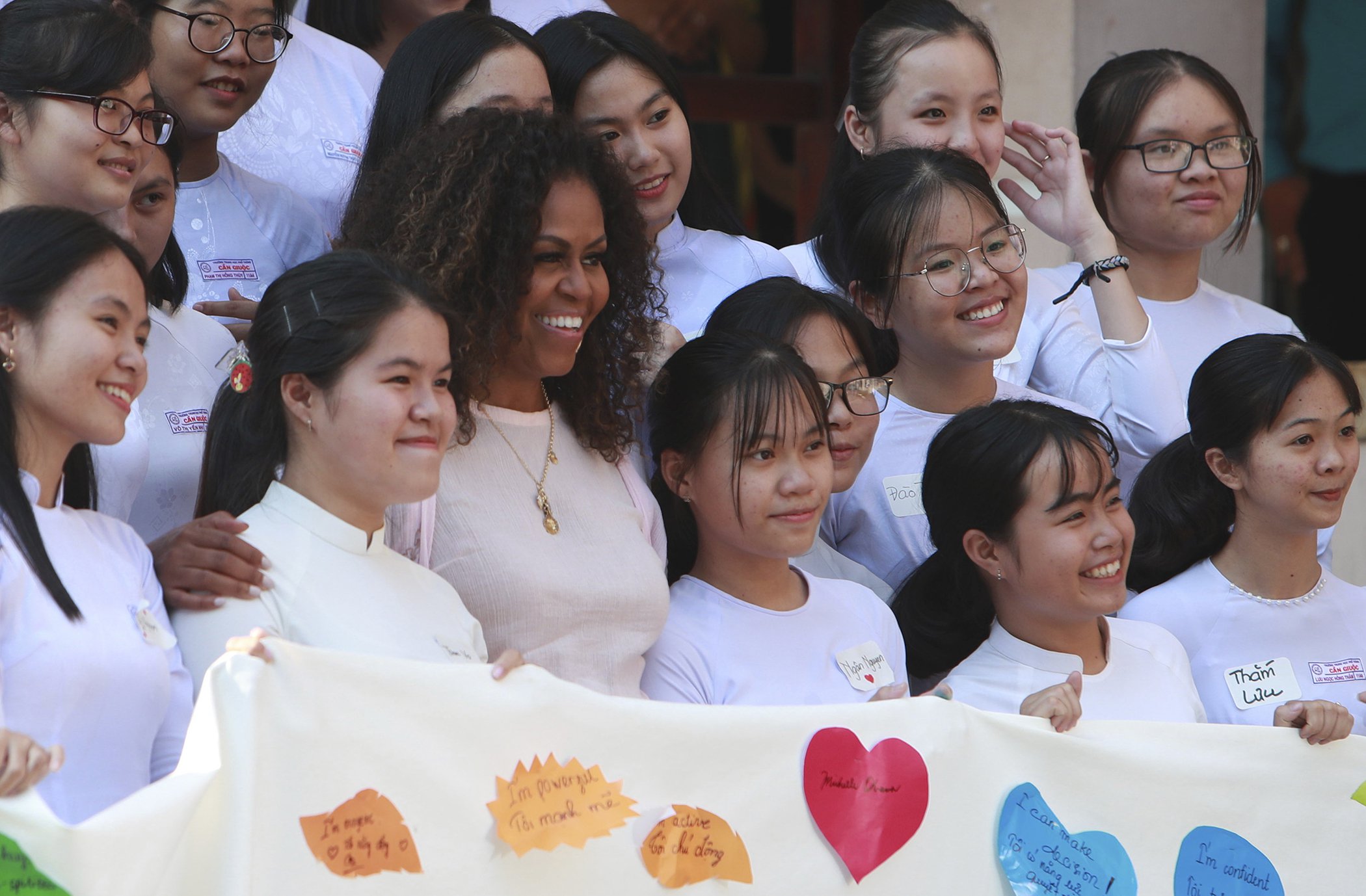 Former US first lady Michelle Obama stands for a photo with female students at the Can Giuoc high school in Long An province, Vietnam, Dec. 9, 2019.
Image: Hau Dinh/AP

What an incredible day in Vietnam with members of the @GirlsAlliance community!

Take a look at our visit to Cần Giuộc high school and then visit https://t.co/uAJh9LbSW0 to support projects that empower girls through education in Vietnam and around the world. pic.twitter.com/dVJD5WGUmY

Student Tay Thi Nguyen shared how she worked in the fields after school alongside her day-laborer parents who couldn’t read. Nguyen wanted to grow up and become a teacher, but in the seventh grade, her parents burned her textbooks and asked her to drop out of school to support them full-time and help support her six siblings. Joining a Room to Read program empowered her to stand up for her education, she said.

“It’s such a beautiful thing: She just never gave up,” Roberts told People about Nguyen. “I will never recover from that story, really.”

Yesterday I had the immense honor to speak with some of the bravest girls who have fought to pursue their education against immense odds. You all are my role models!!! Oh, and here are some of the amazing women I got to go this journey with! (Swipe for happiness) more to come x

Roberts hasn’t publicly advocated for girls’ education before but she was eager to get involved when she received an invitation to visit Vietnam with the Obama Foundation’s Girls Opportunity Alliance, she told People. Roberts said she’s thankful that Obama is so committed to girls’ education.

Yesterday I had the immense honor to speak with some of the bravest girls who have fought to pursue their education against immense odds. You all are my role models!!! Oh, and here are some of the amazing women I got to go this journey with! (Swipe for happiness) more to come x

Roberts and Obama also joined the students in training sessions that instill perseverance, critical thinking, negotiating, and leadership skills. As part of a self-esteem exercise, everyone drew themselves with crayons and markers. The group then worked to script conversations a girl could have with her parents if they resist her career choice. 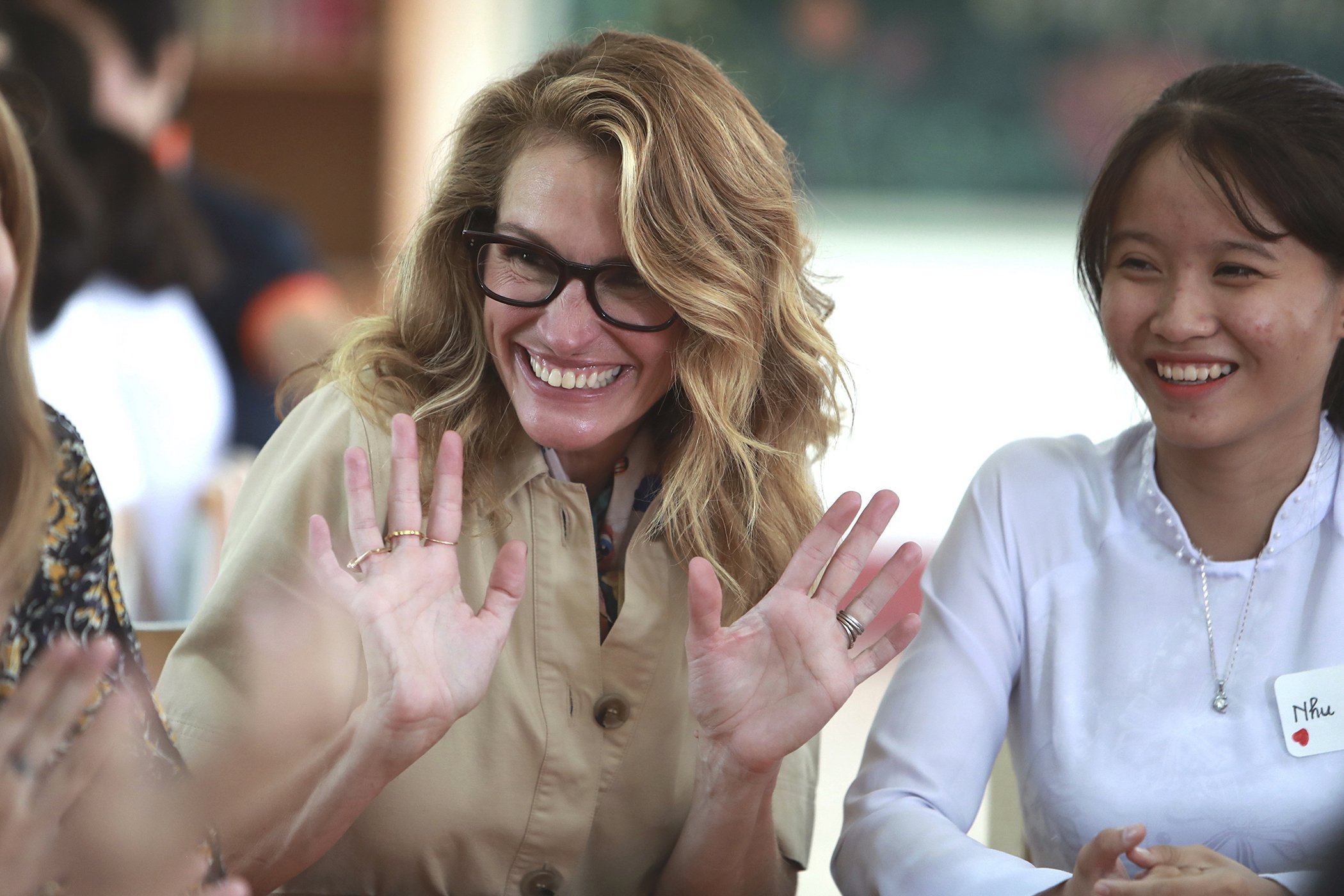 Actress Julia Roberts, left, reacts as she is greeted by students at Can Giuoc high school in Long An province, Vietnam, Dec. 9, 2019.
Image: Hau Dinh/AP

“What people everywhere need to know is that knowledge is the true power,” Roberts said. “It’s the only thing that’s going to save us. It’s impossible to ignore that if women are 52% of the world’s population. How do we think we can get along with less than half of the knowledge we might need to carry on on this planet? So to invest in the education of girls is to invest in ourselves.”