Michelle Obama Is the ‘Face of Feminism’ Says 47% of Americans

You’ll never guess who she beat by just 4%. 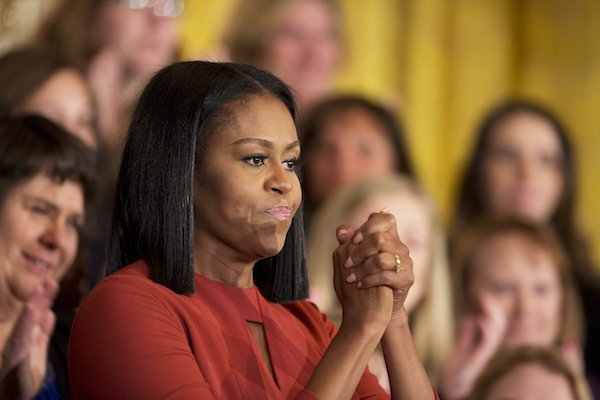 Michelle Obama is the new face of feminism.

The first lady was perceived as the person most closely associated with feminism today, according to a report published Tuesday by PerryUndem, a nonpartisan research organization.

The report, from a survey of 1,302 adults in the US, polled men and women from Republican and Democratic parties on their perceptions of gender equality and sexism in a post-election America.

As part of the survey, those polled were presented with a list of 14 influential women including Emma Watson, CHIME FOR CHANGE co-founder Beyoncé, Hillary Clinton, Oprah, and of course, Michelle Obama. Of those polled, 47% said, “yes,” Michelle Obama represents feminism today.

More than half of Black women (53%) and Latina women (57%) identified FLOTUS as the leading image of feminism.

While 93% of respondents believe in equality for women, only 19% refer to themselves as feminists. This was just one of many disparities between perception and understanding of sexism and gender equality.

Republican men also held some perplexing views on gender equality. Specifically, Republican men were the only demographic who believed that women have it better than men in the US today and that there is little connection between gender issues and policy in the US.

Fewer than half of Republican men said sexism (48%), violence against women (47%), and unequal caregiving responsibilities (36%), affect women’s rights and equality.

Though some of the respondents denied the correlation between sexism and gender equality, others said they were using the election — including the rhetoric that arose from it and Trump’s success —  as an opportunity to teach their children about assault and sexual violence.

Fifty percent of women, and 43% of parents overall, said they will teach their kids about consent and assault as a result of Trump winning the election.

Two-third of pollers say they are taking action (paying more attention to political leaders, donating to organizations, and planning to “do things differently”) as a result of the election outcome.

Best of all, more people want action: eight of 10 people said they want the new administration to make forward moves on women’s rights and equality.