Why period taboos affect everyone

#PeriodProblems affect everyone, including the planet. 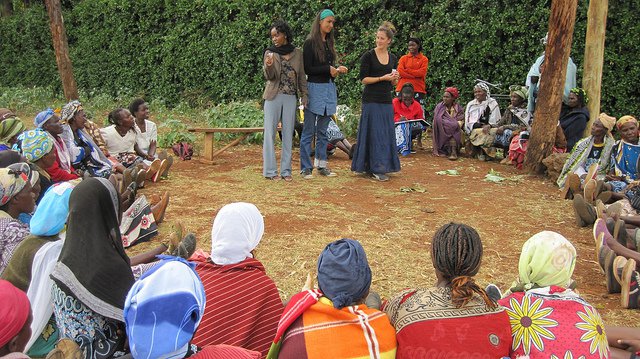 How many times have you heard the comment, “Oh, she must be on her period”?

Even just once is beyond annoying. Often society (especially men) calls out women for being on their period for being in an unpleasant mood. (Sorry guys, but women usually don’t make these comments to other women.)

What response have you heard to this comment? “Lighten up, I’m only joking” might sound familiar. But periods are no joke and can have serious consequences, especially for girls and women in developing countries.

Periods can still carry a stigma, leaving girls and women ashamed and unable to carry on with their daily lives in some parts of the world. Whether a woman “is on her period” or not, linking menstruating to an irritable mood has systematically perpetuated stigmas around periods.

However, some men are breaking the cycle, banishing period taboos and even creating new accessible sanitary products and economic opportunity for women around the world.

Arunachalam Muruganantham is one of those men. More commonly known as the Menstrual Man, he developed a sanitary product for women in India. The Guardian reported that his research began when he caught his wife, Shanti, trying to slip away with some filthy rags. When questioned, she said the choice was between buying towels for herself or buying milk for the family.

Muruganantham created a low-cost machine to address menstrual hygiene challenges for rural women on the subcontinent. Women can then buy these machines to make and sell the pads as alternative sources of income. Sanitary napkins from international companies sold in Indian stores cost around $1.50 (USD) for a pack of eight. The pads from Muruganantham's machine sell for only 25 cents for the same amount.

The machine has been a huge success. There are now more than 1,300 machines across India and it’s been exported to 17 additional countries.

This innovative machine sparked a movement across India.

Menstrual Man tells the story of a man who was concerned for his wife’s well beinghttp://t.co/Izb9Ms39fipic.twitter.com/vJQKbzVUn2

Prime Minister Narendra Modi made the following statement, addressing the issue, in this speech:

“Has it ever pained us that our mothers and sisters have to defecate in open?” He also insisted that “all schools in the country should have toilets with separate toilets for girls. Only then our daughters will not be compelled to leave schools midway.”

Girls frequently miss class when they are menstruating because there are no toilets available to them.

Also in 2014, Modi launched the Clean India campaign. This campaign aims to make India ‘clean’ by Oct. 2, 2019, Modi said. This will include the elimination of open defecation, which he referred to as a “blot on society,” especially for women and young girls. This campaign has shined light on the importance of menstrual hygiene, not only in India but across the world.

To date, there have been almost 10,000 pledges taken and more than 1 million hours contributed through organized activities and challenges to raise awareness to keep India clean.

Menstrual Hygiene Day was Saturday, May 28, and NGOs and governments are now focusing on periods more than ever before. Last December, India became one of the few governments in the world to issue menstrual hygiene management guidelines.

Research by UNICEF India found that 83 percent of girls have no idea what to expect when they start bleeding, and nearly half miss school because of menstruation. Additionally, nearly 90 percent of Indian women don’t use sanitary pads. Instead, they use things such as rags, ashes and newspaper.

Using cloth instead of sanitary napkins is not an issue, as long as the cloth is washed and sun-dried to eliminate bacteria. Unfortunately, taboo surrounding periods prevents this from happening and women often hide the cloth under other garments to dry.

With the increasing use of sanitary napkins, India faces a new problem: disposal of these napkins.

Nearly 60 percent of women simply dispose of their used pads and cloths into an open field. With so much garbage disposal being done by low-caste waste-pickers, the millions of pads a month that the sanitary pad revolution will supply is a burden and biohazard.

India needs to confront the sanitary pad waste footprint and begin working to combat it. If we continue without change, the sanitary hygiene problem will just be substituted with an excessive waste problem.

Period talk isn’t just about women. It’s also a concern for the environment and good hygiene.