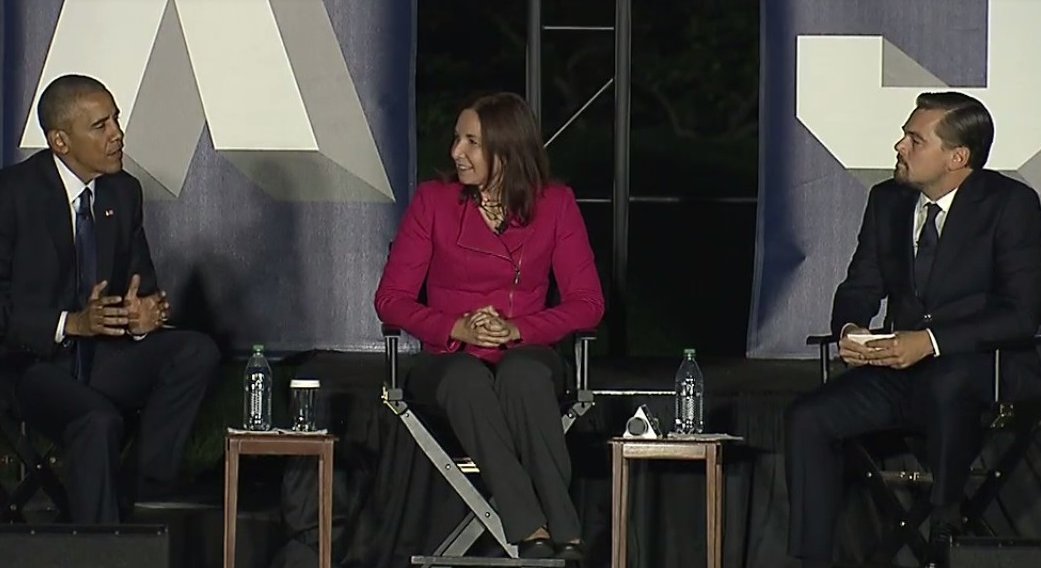 “We’re really in a race against time.”

That’s how President Obama characterized the massive challenge of climate change in a discussion last night with activist and actor Leonardo DiCaprio and scientist Katherine Hayhoe.

The event was part of the White House’s South by South Lawn that drew together luminaries in various fields to explore some of the most vexing and interesting problems of today. DiCaprio’s new documentary on climate change was screened at the event.

In between Oscar runs, DiCaprio has been involved in efforts to stop climate change and influence public opinion for years and his remarks reflected the urgency of the situation.

He was not shy about sharing his impatience with global political inaction.

A third of the members of the US Congress openly reject the science of climate change.

DiCaprio’s documentary is the culmination of three years of travel and study and it attempts to present the scope of climate change to as large an audience as possible.

During the climate change discussion at the White House, Leo acted as the moderator for Obama and Hayhoe as the group covered everything from the economic incentives of becoming sustainable to how Texas is a leader in wind power to why climate change has been such a politically challenging topic.

Here are some of the best quotes from the exchange:

On the political challenge of climate change:

Obama: “Climate change is almost perversely designed to be really hard to solve politically because it is a problem that creeps up on you. There’s no single hurricane or tornado or drought or forest fire that you can directly attribute to climate change.

On the Paris climate agreement:

Obama: “What [the agreement] does do is set-up for the first time the architecture, the mechanism whereby we can consistently start turning up the dials and reducing the amount of carbon pollution that we're putting into the atmosphere.

On the evolving understanding of climate change:

Obama: “What we're seeing is that climate change is happening even faster than the predictions would have told us five years ago or 10 years ago. What we're seeing is changes in climate patterns that are on the more pessimistic end of what was possible — the ranges that had been discerned or anticipated by our scientists — which means we're really in a race against time.”

On the global scope of climate change:

Leo: “The interconnected nature of our planet means that no country or community is going to be immune to any of these threats.”

On why climate change is a common denominator problem:

On the patterns of climate change:

Hayhoe: “If you read the reports of the meteorologists and the weather people talking about these heavy downpours you’re experiencing, you’ll see this phrase they repeat again and again — the warm oceans — and again, this year is a 99% chance of being again the warmest year on record after last year and the year before — the warm oceans are providing a nearly infinite source of moisture for these storms. But at the same time, when we're in a dry period, as we get all the time in Texas, and it's hotter than average, then all of the moisture in our soil and our reservoirs evaporates quickly, leaving us dryer for longer periods of time.”

“So, yes, we know natural cycles are real. But we know that climate change is stretching that natural pattern, impacting us and our economy.”

On Texas’ adoption of alternative energies:

Hayhoe: “Did you know that already Texas is getting 10 percent of its electricity from wind? On a windy night, we get 50 percent of our energy from wind. “

On the importance of education and conversation:

Obama: “We have to make [climate change] visual and we have to make it vivid in ways that people can understand. But then we also have to recognize that this transition is not going to happen overnight, and you're not starting from scratch. People are locked into existing ways of doing business.”

On the difficulty of change:

Obama: “What I always tell my staff, and what I told our negotiators during the Paris agreement is better is good. Better is not always enough; better is not always ideal, and in the case of climate change, better is not going to save the planet. But if we get enough better, each year we're doing something that's making more progress, moving us forward, increasing clean energy, then that's ultimately how we end up solving this problem.”

On taking action and going forward:

Hayhoe: “There is an urgency to it. But there’s also hope, because by acting we can change the future. The future really is in our hands, because for the first time in the history of the human race on this planet, we are the ones in the driver’s seat of climate. It is both frightening as well as an opportunity that we cannot afford to lose."

The power of conservation:

Obama: “[At the Midway Islands] this is water that’s just untouched. And you’re seeing monk seals diving in and swimming next to you, and turtles that are climbing up on the beach just to sun themselves, and it used to be there were 60,000 birds and now there are 3 million birds on this island — bunch of species that were about to go extinct. It all came back just in the span of one generation because of conservation. Well, not only is that creating incredible beauty, but it also means now that you have this huge preserve of ocean that is not contributing to climate change."