By James Hitchings-Hales  and  Erica Sanchez

Having a plastic bag in Kenya can now mean four years in jail. So this girl got creative. 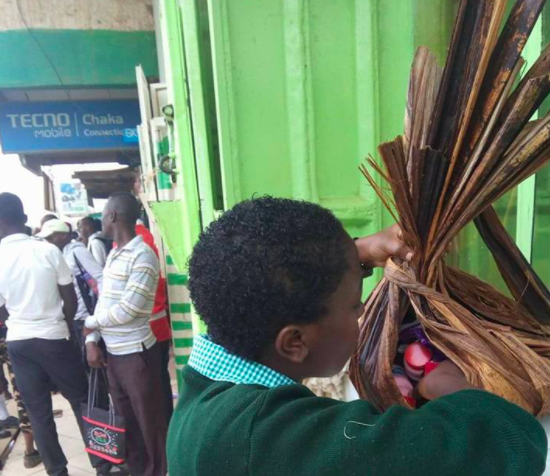 By James Hitchings-Hales  and  Erica Sanchez

In Kenya, a young girl has found overnight fame after a spark of creativity captured the imagination of the whole country.

Kenya passed the world’s toughest ban on plastic last week, making it illegal to own a plastic bag. But Hilda Gaceri Bundi needed to get to class — and didn’t want to spend the Sh200 (equivalent to $2) it would cost to buy a bag to carry her things. So Bundi, a high school student in Meru, eastern Kenya, decided to improvise.

Read More: Kenyans Face Up to 4 Years In Prison For Using Plastic Bags

Bundi spent a whole morning crafting her masterpiece: an environmentally friendly bag made from dried banana leaves. She still doesn’t know who took the photographs that went viral on social media this week, but now, Kenyans are calling on the National Environment Management Authority (NEMA) to make her an ambassador for the plastic bags ban.

“At her home in Keria village, Nkubu, they use improvise bags to carry yams (sic),” commented local fundraiser Ndungu Nyoro in the viral Facebook post. “Dried banana leaves put up together make an environment friendly bag. In fact she had spent her morning making one.”

The ban made it illegal to produce, sell, or use plastic bags in Kenya, and Kenyans face a $38,000 fine or possible four-year jail sentence if found breaking the new legislation.

According to Kenya's Environment Minister Judy Wakhungu, plastic bags can take up to 1,000 years to biodegrade. Before they break down, they pose a dangerous threat to the environment, and can end up in the food chain if ingested by livestock or marine life.

It comes at a “historic” moment in Kenya’s political history, as it became the first African country to have a Presidential election annulled by its Supreme Court on Friday. Critics claimed the system had been hacked to swing the result. A new election has been ordered for within 60 days.

Enough time for Bundi to pull a Presidential campaign out of the bag? Perhaps we need to wait until after she’s graduated.