More than half of the plantation workers are women. 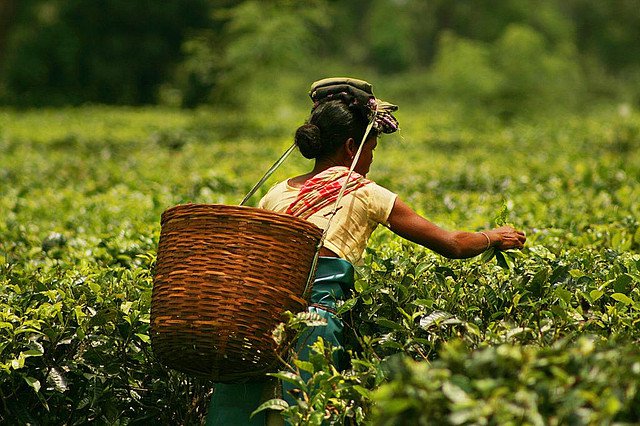 By Annie Banerji and Zarir Hussain

NEW DELHI/GUWAHATI, May 22 (Thomson Reuters Foundation) — Women working on tea plantations in northeast India earn a "pitiful" $2 a day and live in "appalling" conditions with almost no toilets, according to a report released on Tuesday.

The investigation by the British charity Traidcraft Exchange found workers in the tea-growing state of Assam were paid 137 rupees ($2) a day, far below the minimum wage of 250 rupees. More than half are women.

Assam is the largest producer of tea in India and its estates supply top brands including Britain's Twinings and Tetley. Both are working to improve conditions for workers, the report said.

"The women who pick the tea we drink live in appalling conditions and are paid pitifully low wages by tea estates in Assam," said Fiona Gooch, a policy adviser for Traidcraft Exchange.

Workers live in decrepit houses with leaky roofs. They have little or no access to sanitation facilities and most have to defecate in the bushes outside, the report said.

A spokeswoman said Twinings was "fully committed to ethical sourcing".

Read More: This Woman Agripreneur Is Putting Sikkim on the Global Map

"Our Sourced with Care programme … directly addresses the needs and improve the lives of communities on the ground, from access to sanitation to children's rights," she said in a statement.

A spokesman for Tata Global Beverages – which owns Tetley – said it was committed to sustainable sourcing of all the tea that it sells globally by 2020, and that it was working to improve the lives of tea-producing communities across Assam.

Stephen Ekka of PAJHRA, an Assam-based charity fighting for tea workers' rights, urged global brands to be more transparent about how they source their tea.

"In the global supply chain of tea business, the condition of workers is not taken into consideration," Ekka told the Thomson Reuters Foundation.

Assam's tea industry has faced accusations in the past of exploitative work conditions, leading to labour disputes that have forced some plantations to shut.

Estate owners often cite the benefits they are legally required to provide, which include housing, toilets, health facilities and subsidised food, to justify low wages.

Read More:4 Reasons Water and Sanitation are a Gender Issue

"We register complaints to the management, they note it down, but that remains in the register, they give no importance," the report quotes an unnamed woman worker as saying.

Others complained the lack of medicines and medical staff within plantations forced them to opt for expensive hospitals outside.

"Without that, workers may be forced into excessive overtime or bonded labour ... This is simply unacceptable," he told the Thomson Reuters Foundation.

Take Action: Urge the UN to Prioritize Clean Water and Toilets for Women In the Next Decade

Assam's labour and employment minister agreed with the report's findings, promising to increase wages and improve living conditions to "some level of respectability".

"End of May, we are having a high level meeting to formulate new laws for the welfare of the tea workers," Pallab Lochan Das told the Thomson Reuters Foundation.