Understanding the Complicated History and Rapid Rise of HIV/AIDS

Advances in medicine have made HIV/AIDS treatable, but now we must eradicate the stigma. 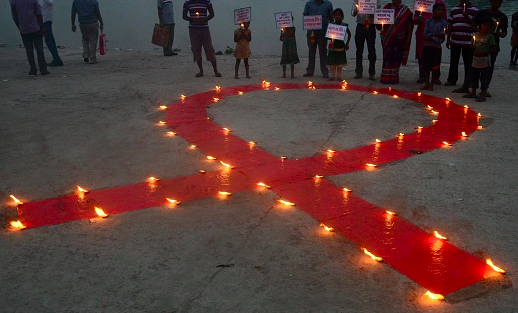 HIV/AIDS began as an illness that instilled fear of those infected as well as those who were susceptible to catching it. Since the beginning of the pandemic in 1981, 78 million people have contracted the disease and 35 million have died from AIDS-related causes.

While its true origins are uncertain, it’s commonly believed HIV originated in the Democratic Republic of Congo around 1920 when it crossed species from chimpanzees to humans. While there are documented cases before the 1970s, HIV/AIDS became the focus of — and a threat to — public health in the mid-1970s and early 1980s.

Why did HIV/AIDS spread so quickly in such a short period of time? The answer is complicated.

Ready to Act? Learn How You Can Help Here.

First, there was a big shift in cultural norms at this time. After the Stonewall riots of 1969, when gays fought back against a police raid at a bar in New York's Greenwich Village, gay activism exploded across the country. Social activism became more prominent in general. Plus, with birth control available, abortion legal, and antibiotics available for many sexually transmitted diseases, the risks of all forms of sex seemed more minimal than ever before.

This attitude shifted quickly, though.

In the summer of 1981, the US Centers for Disease Control and Prevention (CDC) reported the first cases of a rare pneumonia young gay men. This report marked the beginning of the HIV/AIDS epidemic. The New York Times also published the first article about HIV/AIDS cases titled, “Rare Cancer Seen in 41 Homosexuals.” This is the first time “gay cancer” entered into the public lexicon.

By 1982, cases had spread throughout the US. The first cases were reported in Africa and across Europe. Healthcare professionals and media commonly referred to the disease as “gay-related immune deficiency,” or GRID, placing a stigma around homosexuality.

As more people in the gay community became diagnosed with the disease, the worse the prejudice became. Anti-gay activists argued that gays were the sole reason for the spread of such a terrible disease, and the media certainly wasn’t helping. This led to negative attitudes toward homosexuals, and as a result, many people would not acknowledge the severity of the epidemic. AIDS was even labeled an American phobia by Europeans.

In September 1982, the CDC officially recognized the disease as AIDS (acquired immune deficiency syndrome) calling it “a disease at least moderately predictive of a defect in cell mediated immunity, occurring in a person with no known case for diminished resistance to that disease.”

The epidemic began and was most prominent in the US. Unfortunately, very little action was taken to stop the epidemic, as President Reagan refused to acknowledge that HIV/AIDS was a real problem. In fact, he didn’t even use the word “AIDS” in public until he gave a speech in 1985 — years after the epidemic began — on the health crisis that killed more than 35 million people.

As the Reagan Administration remained silent on the matter, so did the American people. HIV/AIDS was swept under the rug but continued to spread. This led to low public opinions of gay people, a standard set by the silence of the highest government officials. As a result, there was nothing being done to treat this horrific disease.

Read More: We Can Stop AIDS: Look at How Far We've Come

In 1985, the US Department of Health and Human Services (HHS) and the World Health Organization (WHO) hosted the first-ever International AIDS Conference in Atlanta, Georgia; The Netherlands implemented the first needle and syringe disposal program to combat the spread of HIV/AIDS through needle injection; The American Foundation for AIDS Research (amfAR) was founded after actor Rock Hudson died of AIDS and left $250,000 to start the foundation.

By the end of 1986 — just five years after the first reported case — 85 countries had reported 38,401 cases of AIDS to WHO. There had been at least one case reported in every region of the world. The quick spread of the disease led to HIV/AIDS being the first disease debated on the UN General Assembly, where the Assembly designated WHO to lead efforts to address AIDS globally.

In 1987, WHO launched The Global Program on AIDS to raise awareness, generate evidence-based policies, provide technical and financial support to countries, conduct research, promote participation by NGOs, and promote the rights of those living with HIV. And in 1988, WHO declared Dec. 1 as World AIDS Day.

Between 1990 and 2016, huge strides have been made to combat the spread of HIV/AIDS by practicing safe sex and promoting prevention and awareness. Since 1985, an annual International AIDS Conference has been held to discuss the progress and future steps to be taken to reduce the amount of cases worldwide.

Read More: 9 Ways HIV/AIDS Has Changed Over the Past 30 Years

Treatments have been introduced to those living with HIV, and in 2015, 46 percent of those infected had access to this treatment. UNAIDS announced the Millennium Development Goals relating to HIV had been reached six months ahead of schedule. UNAIDS is also continuing their work to prevent future cases of AIDS in line with the Sustainable Development Goal to end AIDS by 2030.

However, when “Hollywood HIV panic” made headlines in 2015, homosexuals were reminded of the discrimination they faced three decades ago. Bigoted attitudes in the public and media contributed to the rapid progression of the spread of HIV/AIDS in the 1980s. Infected individuals were rarely taken seriously, and there was little being done to find a solution to the pandemic. This headline is proof that prejudices are not completely gone.

There should be no complacency when it comes to the eradication of HIV, but the disease is no longer a death threat and there are ways to prevent becoming infected. The fight is far from over, but advances in medicine have made HIV/AIDS treatable. Now, in the words of Elton John, we must eradicate the most deadly symptom: stigma.